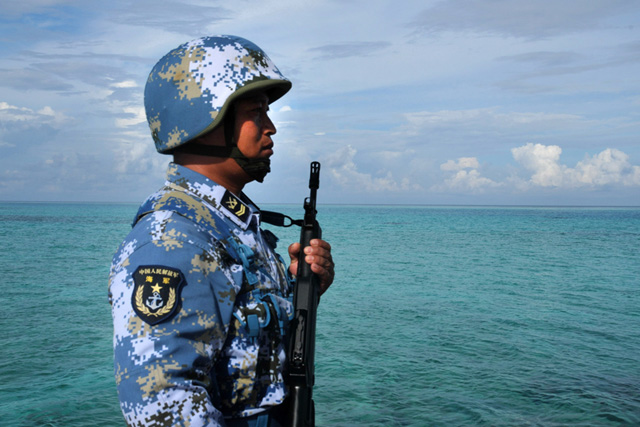 Secretary of Defense Ash Carter said the U.S. is advising all sides of ongoing territorial disputes in the South China Sea against militarizing the region during a Wednesday press briefing in Tokyo with his Japanese counterpart.

Speaking in response to a question on China’s ongoing effort to build installations in the Spratly Islands, Carter indicated the U.S. was firmly against the use of military power to change the regional dynamics in the South Chian Sea.

“[In] making sure that there are no changes in the status quo that are made coercively and that territorial disputes which are longstanding are not militarized — the United States has long opposed that kind of activity on the part of anyone in the region,” he said.
“While, we don’t, as we frequently say, take a stand in any of those territorial disputes, we take a strong stand against militarization of those disputes.”

Carter’s comments follow a speech in Australia last week by U.S. Pacific Fleet commander Adm. Harry Harris in which he questioned China’s intentions in their reclamation efforts referring to the project as a “great wall of sand.”

“When one looks at China’s pattern of provocative actions towards smaller claimant states – the lack of clarity on its sweeping nine-dash line claim that is inconsistent with international law and the deep asymmetry between China’s capabilities and those of its smaller neighbors – well it’s no surprise that the scope and pace of building man-made islands raise serious questions about Chinese intentions,” Harris said.

The Chinese Foreign Ministry addressed Carter’s remarks obliquely in a Wednesday press briefing reiterating China’s stance of handling its territorial disputes with countries on a one to one basis — as opposed to the U.S. position that recommends a multi-lateral approach to the overlapping claims.

“We hope that the American side would respect efforts made by China and relevant countries in the region for a negotiated settlement, do and say more things with a sense of responsibility, and play a constructive role for regional peace and stability,” said ministry spokeswoman Hua Chunying.
“We stay committed to resolving the relevant issues through consultation and negotiation with countries directly concerned.”

Analysts have said the reclamation efforts are most likely military installations.

“A reclaimed island being built by China on Fiery Cross Reef appears to be designed to include a 3,000-meter-long airstrip, in addition to ports and radar facilities,” read a March report from Jane’s Defence Weekly.
“Chinese sources indicate that 1,000 km-radius Su-27SK fighters have been deployed to Woody Island in the Paracel archipelago. If deployed to Fiery Cross, the Su-27SK could cover most southern areas of the South China Sea.”