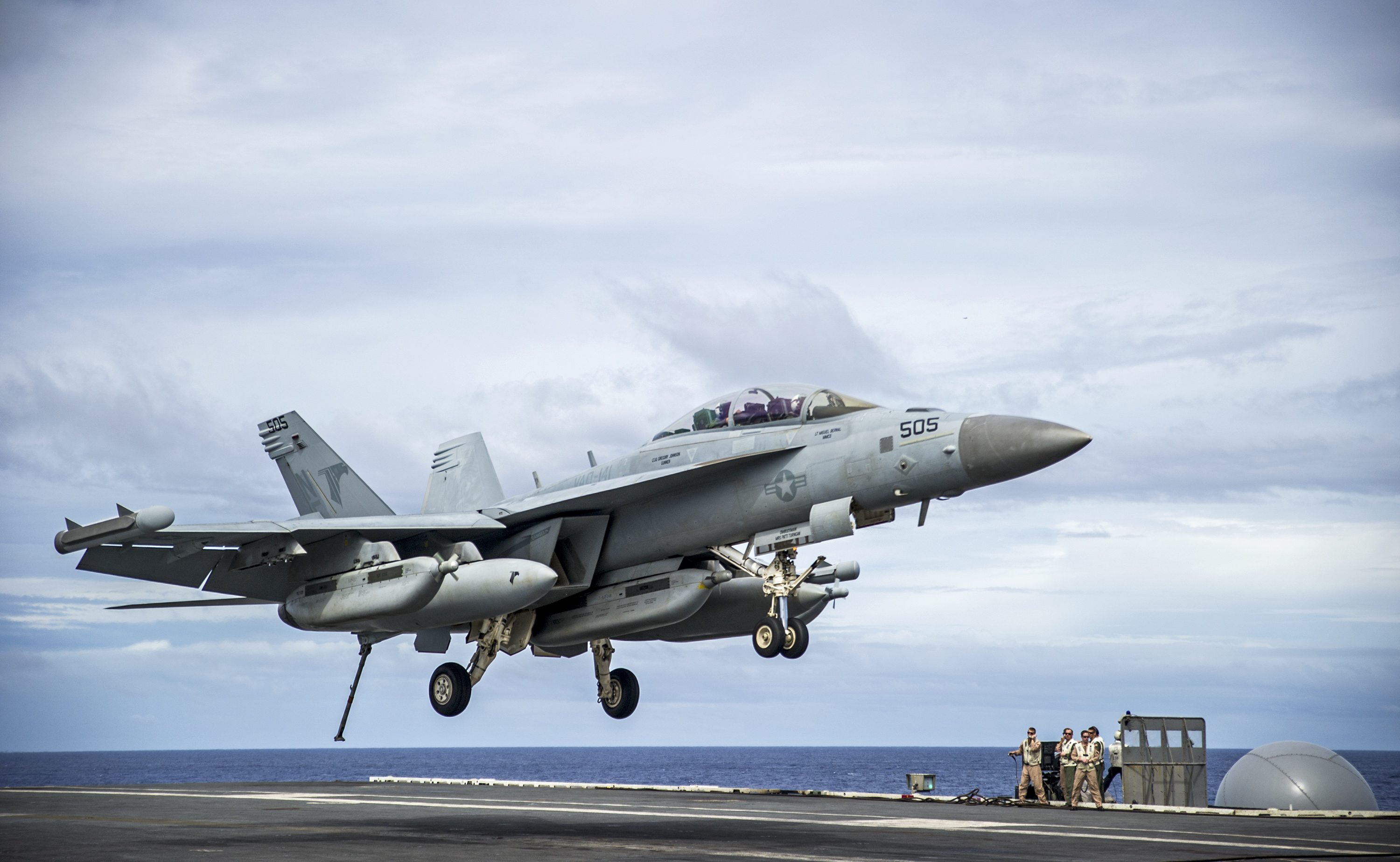 An E/A-18G Growler from the Shadowhawks of Electronic Attack Squadron (VAQ) 141 prepares to make an arrested landing on the flight deck of the Nimitz-class aircraft carrier USS George Washington (CVN 73) on Nov. 3, 2014. US Navy photo.

The Pentagon’s new Electronic Warfare (EW) Executive Committee was created this week to refocus the services on matters of EW strategy and operational capability, according to the memo signed Tuesday establishing the committee.

Deputy Defense Secretary Bob Work said Tuesday at the Credit Suisse/McAleese 2016 Defense Programs Conference that he would sign a memo creating the committee to help protect the United States’ EW technical superiority that is “diminishing rapidly.”

“The [Defense Science Board] concluded that the Department of Defense (DoD) has lost focus on electronic warfare at the programmatic and strategic level and should recreate the mechanisms needed to develop EW strategies, synchronize programs, and advise the Secretary and Deputy Secretary of Defense on EW matters,” Work wrote in the memo.
“The DSB recommends, and I concur, that we establish an oversight committee to address these shortfalls, especially at the points where EW and cyber are converging.”

The memo continues, noting that the committee’s “initial focus area will include EW strategy, acquisition, operational support, and security.”

The committee will be cochaired by Pentagon acquisition chief Frank Kendall and vice chairman of the Joint Chiefs of Staff Adm. James “Sandy” Winnefeld.

Kendall said at the same conference on Tuesday that the committee would not put one service in charge of electronic warfare, but rather it would ensure that all services have offensive and defensive EW capabilities that meet their particular needs.

“If you’re working in an electromagnetic environment, there’s a defensive side of electronic warfare as well as the offensive, or the jamming side if you will,” he said in response to an audience question.
“And we need platforms in the services that are appropriate for their missions areas and support the types of equipment they have. So I do not see an executive agent for the department – I think each service is going to have to do some things that are unique and some things that are shared, and what we’re going to try to do with that council is make sure we’re as efficient and as effective at that as we can be. Now if at some point in the future it looks like it makes more sense to do executive agent, we could consider that, but at this point in time I don’t think we would do that.”

It is unclear how this added oversight will affect an upcoming decision regarding Boeing’s production line of EA-18G Growlers and F/A-18E/F Super Hornets. The Navy received additional funding from Congress last year to buy more Growlers to help meet the Navy’s EW needs. But Boeing F-18 program manager Dan Gillian is pushing for additional Growler sales to meet the Joint Force needs.

Chief of Naval Operations Adm. Jonathan Greenert “has said he thinks he’s good for the U.S. Navy-only engagements, but most of the engagements we have are joint engagements,” Gillian told USNI News in a March 11 interview. “The Growler is the jamming platform for all the services, so they’re really still looking at that joint engagement and do they have the right number of airplanes.”

Boeing must decide by mid-year if it will keep the Growler and Super Hornet production line open.

Vice Adm. Joseph Mulloy, deputy chief of naval operations for integration of capabilities and resources, was coy about the Navy’s Unfunded Requirements List, which may or may not seek congressional support for additional Growlers. The list has already been approved by the CNO and Navy secretary and was forwarded to the Office of the Secretary of Defense and the Joint Staff for final review, Navy spokesman Capt. Danny Hernandez told USNI News.

“I would like to have Hornets. I would like to have Growlers too,” Mulloy said at the defense conference Tuesday.
“So within that mix we have to sit down with the secretary of defense and figure out all the things that I need to buy that I really wanted more of that I could get.”

“The CNO was talking about electronic warfare, that really matters to him, but the ability to have enough aircraft to fly also matters to him, and getting fifth generation matters to him,” Mulloy said, without confirming whether Growlers, Super Hornets or the fifth-generation F-35 Joint Strike Fighter (JSF) would be on the list.