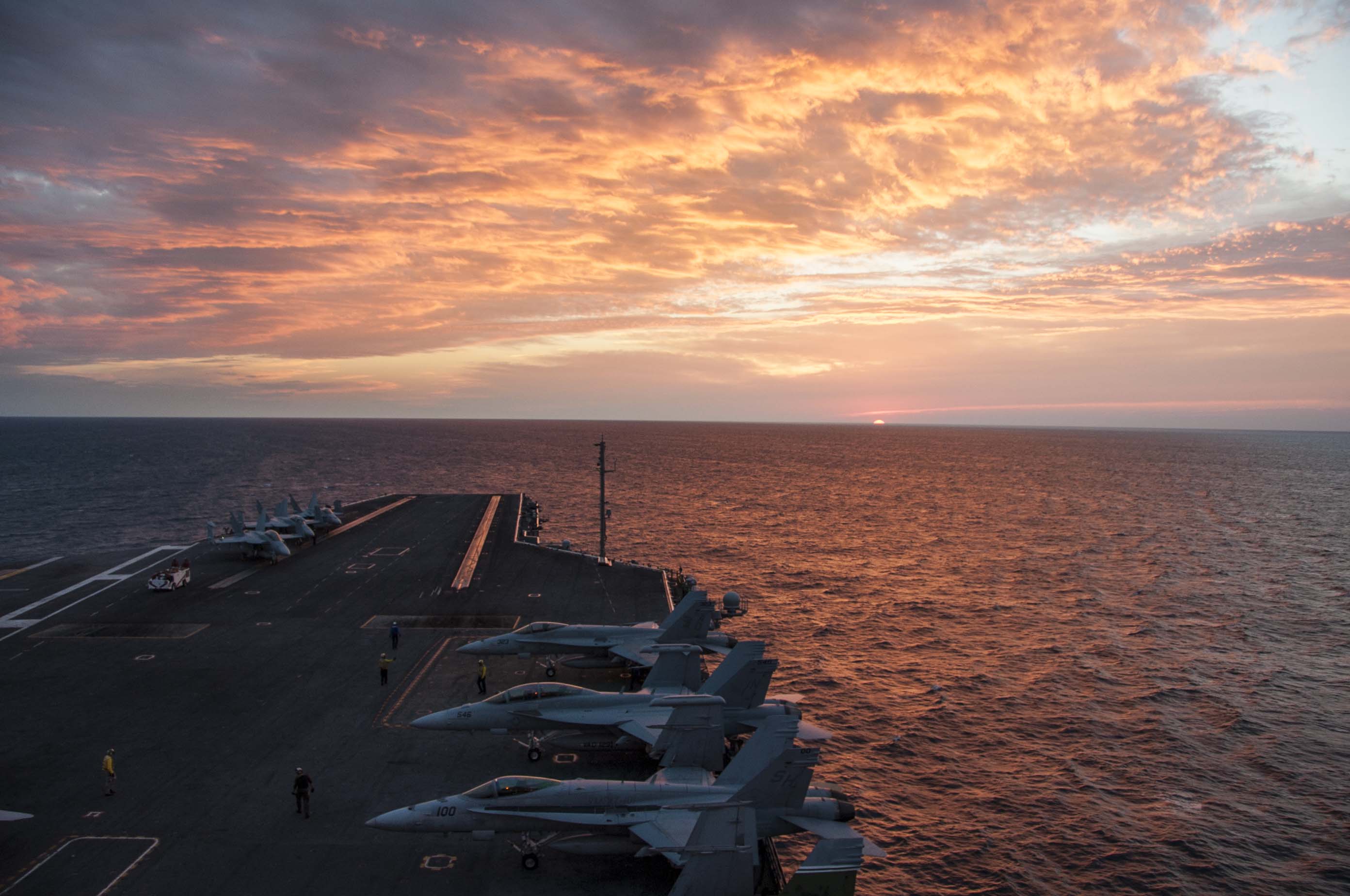 Aircraft sit on the flight deck of the aircraft carrier USS Theodore Roosevelt (CVN-71) on Oct. 29, 2014. US Navy Photo

The carrier was sidelined for two days while sailors cleared the intakes of marine growth.

The ship will now move to catch up with the rest of the carrier strike group (CSG) that departed on time.

Roosevelt just completed its own RCOH last year and is currently the most technologically advanced carrier in the U.S. fleet.

The deployment will be the first of a Naval Integrated Fire Control-Counter Air—or NIFC-CA (pronounced: nif-kah) capable CSG.

The scheme connects the carrier, Normandy and a deployed squadron Northrop Grumman E-2D Advanced Hawkeyes to create a targeting network that extends the lethal reach of the CSG.

The following is the March, 11 release from the Roosevelt CSG.
Theodore Roosevelt Deploys for World Tour

TR and its Sailors will conduct operations in the U.S. Navy’s 5th, 6th and 7th Fleet areas of responsibility during the deployment.

“The crew has done an absolutely stellar job getting TR ready for deployment,” said Capt. Daniel C. Grieco, TR’s commanding officer. “We’re at the point where the ship’s systems are perfect and ready to go and the crew is as sharp as they can possibly be.”

The deployment is part of an ongoing rotation of U.S. forces supporting maritime security operations in international waters around the world.

“This is a unique deployment that will actually encompass three different areas of responsibility or AORs,” said Grieco. “We will start off going to 6th Fleet, which is in the Mediterranean, then head on to 5th Fleet, the Middle East, and we will continue through 7th Fleet area of operations before we wind up at the end in San Diego.”

“This is my first deployment,” said Damage Controlman Fireman Norman Sanders, from Portage, Ind. “I just know that it will be a great learning experience, and will give me opportunities I have never had before, so I am very excited.”

“This will be my 11th deployment and my fifth set of work-ups in a command position. We are more ready to conduct sustained operations at sea as we embark on this deployment than ever before,” said Rear Adm. Andrew Lewis, commander, Carrier Strike Group 12. “The Strike Group’s components, the USS Theodore Roosevelt, Carrier Air Wing One, Destroyer Squadron Two, and the USS Normandy, are mission-focused and well led. We are grateful for the support of the maintenance and training communities as well as the type commands preparing us for this deployment. I want to thank the families and friends of our people for their support and service to our Navy. I know you are tremendously proud of each and every Sailor and Marine in the Strike Group. I am personally committed to their safety and security, and I am confident these great Americans will persevere in every mission.”

The five ships and nine aircraft squadrons of TRCSG consist of approximately 6,000 Sailors and Marines who have spent the last year conducting intensive training and certification exercises to establish a safe, cohesive organization capable of performing a wide variety of missions across the globe, ranging from counter-piracy and ground support operations to humanitarian assistance and disaster relief.

TR’s deployment will be a world tour, which will end with her completing a homeport shift to San Diego. TR’s change in homeport is part of a three carrier shift involving the USS Ronald Reagan (CVN 76) and the USS George Washington (CVN 74).

Theodore Roosevelt, named in honor of the 26th U.S. President, was commissioned Oct. 25, 1984 as the 4th Nimitz-class aircraft carrier.