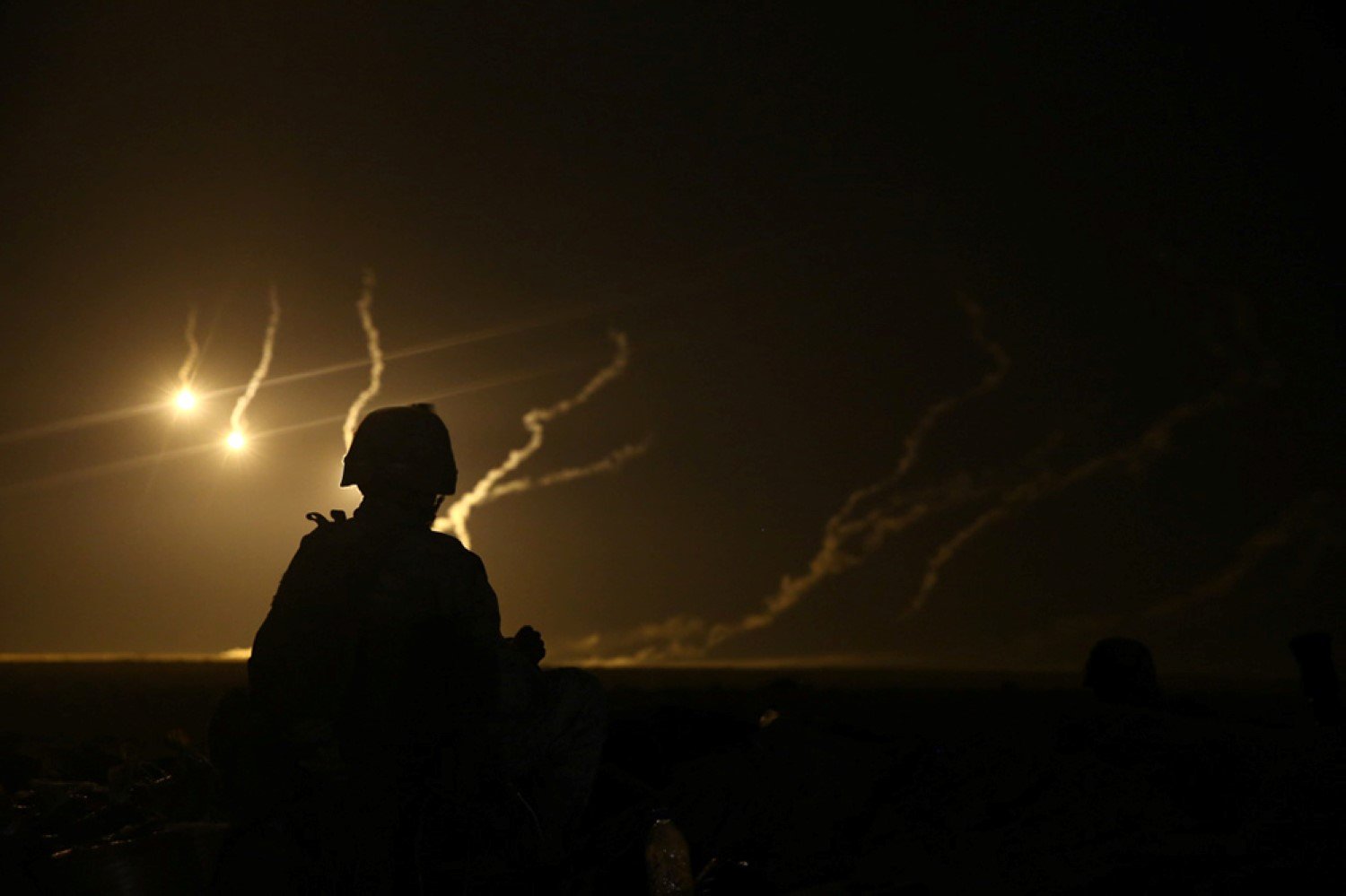 “In my opinion, it worked out superbly,” he said.
The 11th MEU, which returned home Feb. 25, is one of the first two MEUs – the other is the Camp Lejeune, N.C.-based 24th MEU – to deploy with a SOFLE team as a proof-of-concept designed to leverage capabilities and improve relationships between deployed conventional and special operations forces and conventional forces.

That direct connection to the SOF community – and its deep bench of well-funded, advanced, high-tech capabilities – no doubt made life, well, a lot easier for the 11th MEU and Makin Island ARG, which returned home Feb. 25 and 26.
“We didn’t do anything necessarily differently than we supported in the past,” Trollinger said.
“But planning, preparation, coordination, I think that is where it was off the chart. I had much better access – I don’t think I could have had better access – to what was going on in their (SOF) headquarters as they were working the plan and determining how we could support their plan. I had much better context and knew how I fit into what it was they were doing. It just put me into a better position to be able to support them.” 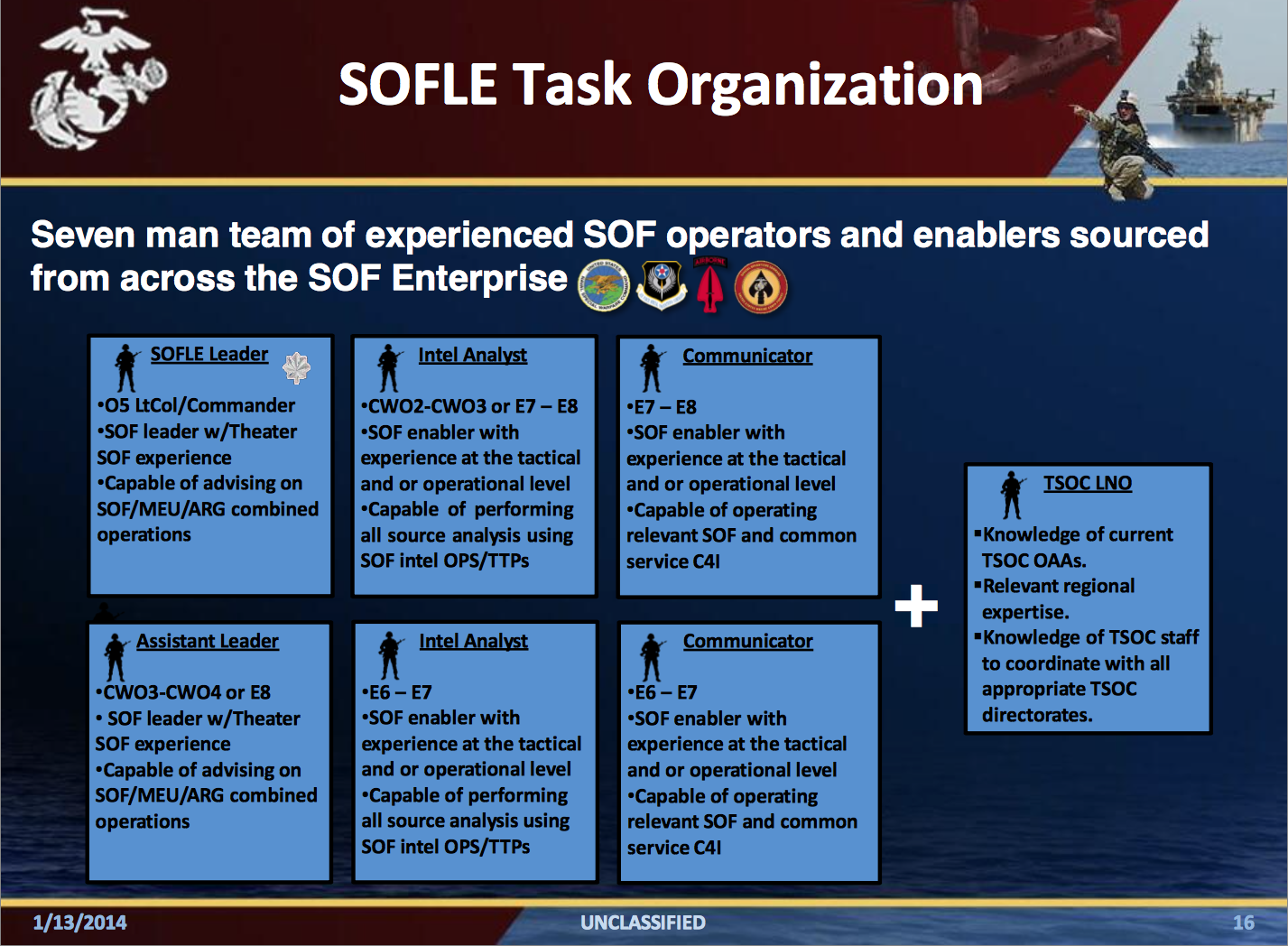 “The SOFLE kind of carries the load, because they can talk MEU/ARG-MEU capability, and they’ve got the credibility in the SOF community,” he added.

The idea for SOFLE grew from a Marine Corps and SOCOM war game held in April 2013, where top leaders sought to find ways to combine their strengths into an integrated force to better support global combatant commanders. The then-commandant, Gen. Jim Amos, and SOCOM’s commander, Adm. William McRaven, approved the plan for liaison teams, which would operate from the ARG’s big-deck amphibious ship and be equipped with a dedicated command, control, communications, computers and intelligence (C4I) capability with super-high frequency linking it to SOF’s Global Services Network (GSN), according to a commentary about the program in the January issue of Marine Corps Gazette.

The system “provides two to four megabytes of bandwidth over DISA X-Band with no airtime costs to the ship,” wrote Maj. Robert S. Bunn, an operations planner with MARSOC.
“These capabilities significantly enhance the ARG/MEU’s ability to communicate with the TSOC and SOF forces ashore, greatly enhancing MAGTF-SOF integration.”
The greatest benefit comes with visibility: The Marine Corps can know what SOF is doing, and vice versa, said Lt. Gen. David H. Berger, the I Marine Expeditionary Force (I MEF)commander at Camp Pendleton. It wasn’t uncommon for a MEU to arrive in a country and SOF would show up, Berger said. 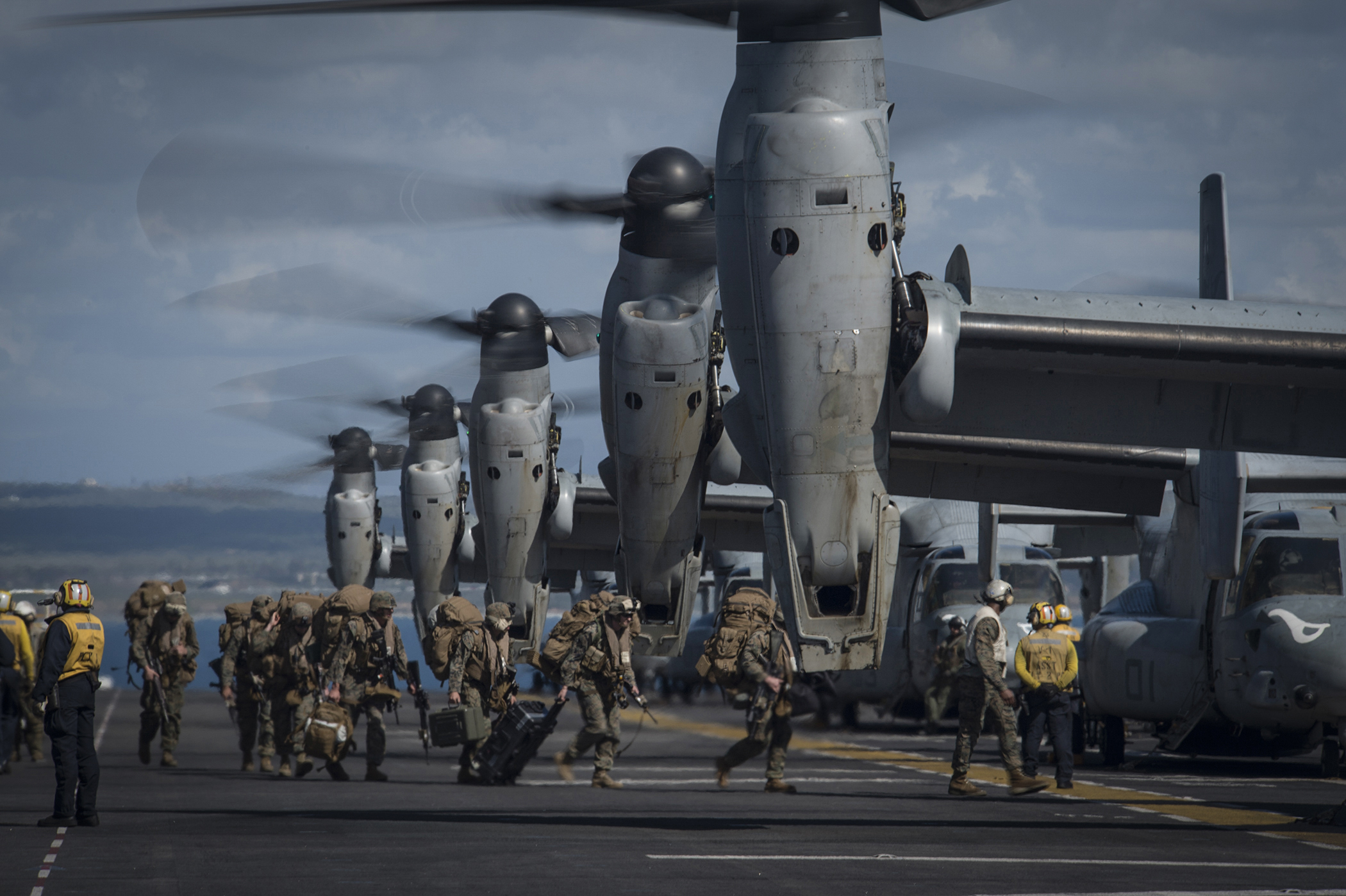 Marines from the 11th Marine Expeditionary Unit (11th MEU) board MV-22 Ospreys attached to Marine Medium Tiltrotor Squadron 163 (Reinforced) as they prepare to launch from the flight deck of the amphibious assault ship USS Makin Island (LHD-8) on Feb. 23, 2015. US Navy Photo

“We wouldn’t know they were coming, (and) they wouldn’t know that we were there, because we have different headquarters, different chains of command.”
The link that comes with SOFLE “makes a world of sense,” said Berger, who earlier in his career was a company commander and operations officer with 2nd Reconnaissance Battalion during the 1991 Iraq War. With improved, if not streamlined coordination, “you don’t have to go through multiple chains of command. You can just talk direct,” he said. And that’s particularly critical in a fast-moving crisis situation that a MEU/ARG could face. “It’s huge.”
“They need things from us that we have. We need things from them we don’t have,” he said, of SOF. “We have really complementary capabilities.”

The SOFLE enabled the MEU’s Recon Company, a robust group of about 75 Recon Marines and support personnel, to do more, Trollinger said. The liaisons “advertised capability and said, ‘Here’s what we can do for you. We have Reconnaissance Marines – they’re not SOF – but they do have some similar capabilities. Let’s look at leveraging those capabilities.’ So the SOFLE did a lot of work identifying, and then actually planning, coordinating different activities that my reconnaissance Marines were able to do with different SOF entities while we were deployed.”

“If we did not have the SOFLE, we would not have been able to do, in my opinion, the different activities that we were ultimately able to do,” he said.

“We didn’t know what it was specifically we may encounter in 5th Fleet, but we knew what was going on in the region, certainly with ISIS (Islamic State in Iraq and Syria) rearing its head in different locations and gaining momentum,” Trollinger said.
“So we knew that our deployment would be characterized by a great deal of uncertainty. But we were focused on being as best prepared as we possible could be.”

That included scheduled training exercises, including exercise Cougar Voyage in Kuwait and Red Reef 2015 in Saudi Arabia, according to Navy News reports. 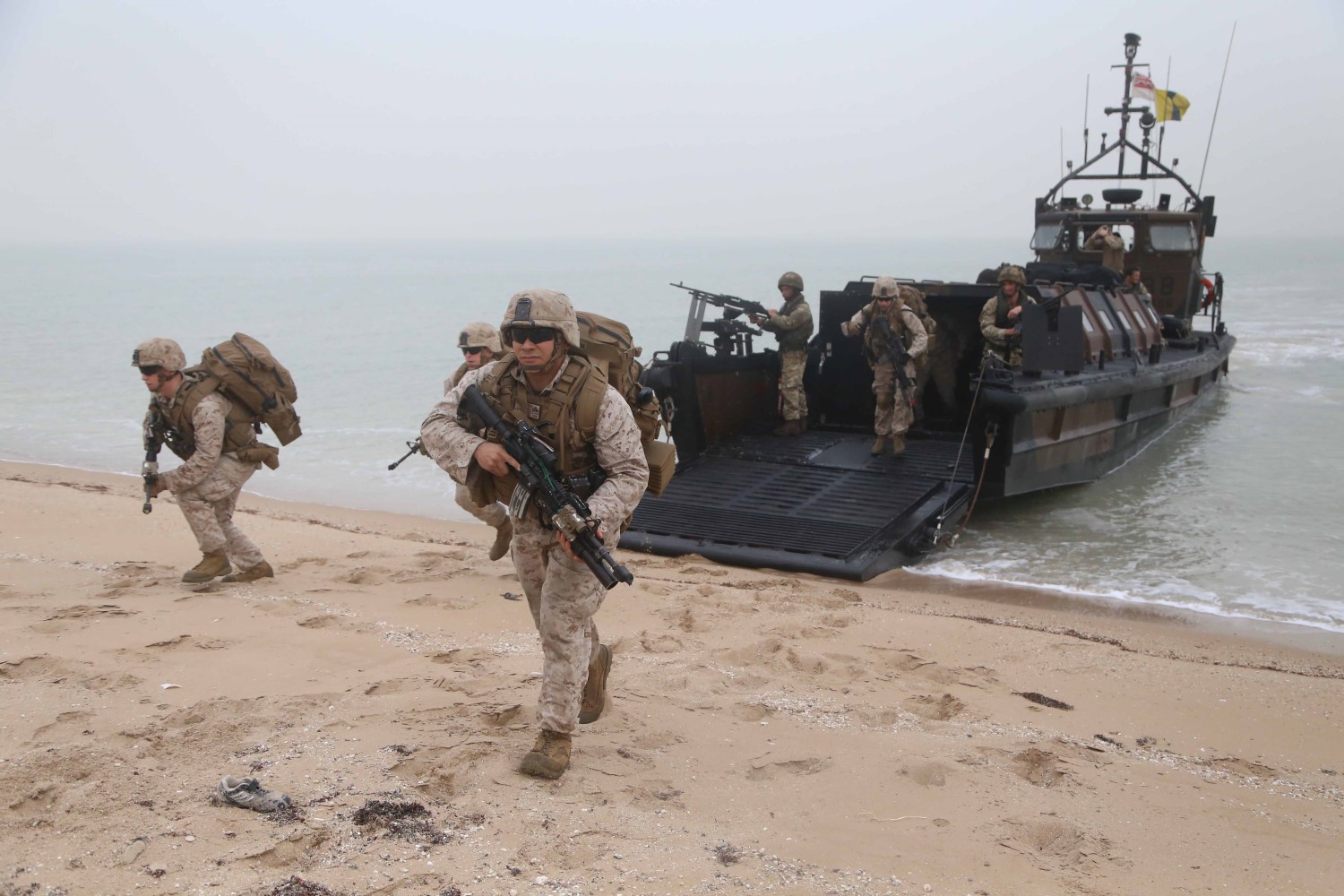 Before reaching 5th Fleet, in early September, “we were directed to be prepared to assume certain postures in different locations,” Trollinger said, so “the ARG/MEU split apart and went into different areas. We stayed that way throughout our time in 5th Fleet.” The blue-green force joined in air operations during Operation Inherent Resolve, the coalition campaign conducting strikes against ISIS in Iraq and Syria.

“We answered the call with the tasks we were given by higher headquarters to maintain that (posture) throughout the entire time in 5th Fleet,” he said.
“We were prepared to execute crisis response in a couple of different locations,” he added, without elaborating.

The 24th MEU and Iwo Jima ARG replaced them and currently is operating in the area.