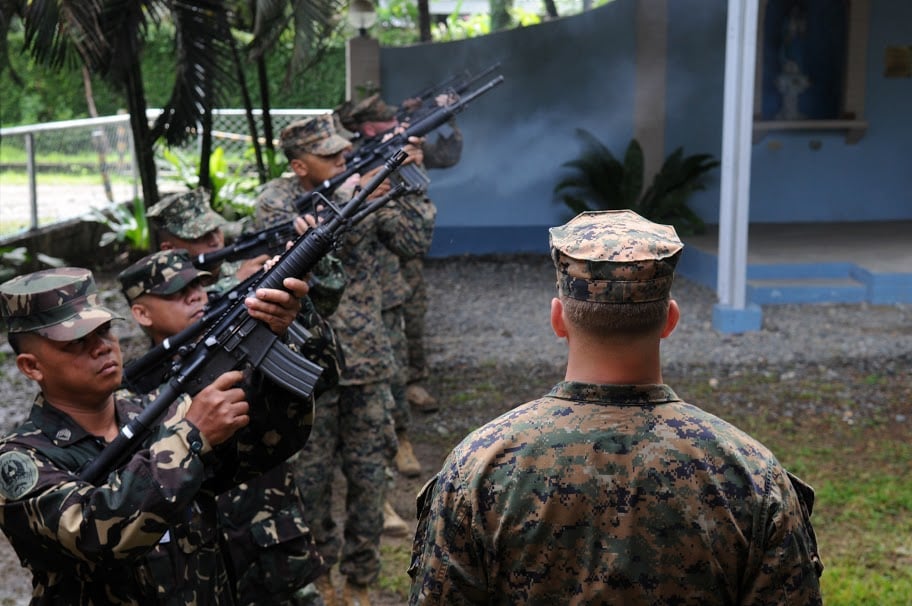 On Tuesday, a ceremony in Zamboanga City marked the deactivation of Joint Special Operations Task Force-Philippines (JSOTF-P), according to local press reports.

“The JSOTF-P is scheduled to complete the transition May 1 and while some of the personnel will return to their units, some will remain as part of foreign liaison elements, and continue to advise and assist Philippine counterterrorism efforts, consistent with the way forward that the Armed Forces of the Philippines sees it,” U.S. Special Operations Command, Pacific spokesperson Army Maj. Kari McEwen told USNI News via an emailed statement.
“This represents a shift in focus for U.S. Special Operations Forces from advising and assisting at the small unit level to providing operational advice and assistance at higher levels of command within the Philippine Security Forces for continued counterterrorism progress, humanitarian assistance and civil military cooperation.”

At its height, the JSOTF-P reportedly had up to 600 U.S. military personnel in country — a mix of Navy SEALs and Marine and Army special operators.

“Most special operations require non-SOF assistance and JSOTF-P is no different,” McEwen said in an additional statement on Friday.
“Over the years, JSOTF-P personnel have come from almost every military specialty from all the services.”

Though the mission — begun in January of 2002 — put U.S. forces in largely an advisory role, 17 U.S. troops died as part of the mission, including 10 who perished in a 2002 helicopter crash.

The train and advise mission has largely been seen as a success and U.S. civilian military leaders in the Pacific.
“Our partnership with the Philippine security forces has been successful in drastically reducing the capabilities of domestic and transnational terrorist groups in the Philippines,” Kurt Hoyer, the U.S. Embassy Press Attaché, told the AP in 2014.
Last year, then-U.S. Pacific Command (PACOM) commander Adm. Samuel Locklear told Foreign Policy in April the force levels would likely be reduced.

“We’re not going to walk away from our support of the Armed Forces of the Philippines, but we’d like to broaden it in a way that is consistent with the way forward that the Armed Forces of the Philippines sees it,” Locklear said.
“We don’t necessarily need a 600-man train-and-assist mission down there to try to teach them how to do something that they now know how to do.”