A little noticed December contract award for the missile launchers used as part of the U.S. Navy’s Aegis Combat System gives hints to the direction of a potential $20 billion U.S. naval arms sale to Saudi Arabia.

Included in the initial $235 million award from Naval Sea Systems Command (NAVSEA) — with options to increase the award to $356.79 million — to Lockheed Martin for an unspecified number of MK 41 Vertical Launching Systems included a contract option to set aside 26.3 percent of the funds — or about $93.8 million of the $356.79 million — for Saudi Arabian VLS.

They are in wide use by U.S. allies around the world.

Capable of firing several missile types — most notably the Raytheon series of Standard Missiles — the system is on use on close to 190 ships in 19 classes, according to information from Lockheed Martin.

Saudis currently don’t use the MK 41, instead relying on a French system in their Al Riyadh-class of frigates 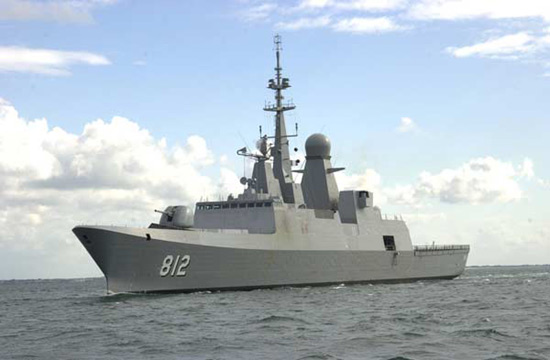 Officials with Lockheed Martin referred comment on the award to the Navy.

A spokeswoman with the Navy International Program Office (NIPO) told USNI News this week that, “it is not our policy to discuss the specifics of foreign military sales (FMS) cases.”

For almost seven years Saudi Arabia has been in negotiations with the U.S. to upgrade the Royal Saudi Navy’s Eastern Fleet, composed of aging American-built ships, as part of the Saudi Naval Expansion Program (SNEP II).

“This massive purchase could include destroyers, patrol craft, helicopters, ground vehicles and other platforms, as well as warehouses and substantial upgrades to port infrastructure. The requirements are still being developed, but recent estimates values the overall program at around $20 billion,” according to an October U.S. Army Corps of Engineers presentation.

Ship types the U.S. could sell to the Saudis include an anti-air warfare (AAW) capable version of the Freedom or Independence-class Littoral Combat Ship or a ballistic missile defense (BMD) capable Arleigh Burke-class guided missile destroyer (DDG-51) have been mentioned as possible contenders for the SNEP-II combatant.

Both LCS builders, Lockheed Martin and Austal USA, have said they have variants of their hulls that can accommodate a MK 41 and a smaller SPY-1F AAW radar.

In 2011, the U.S. Navy briefed kingdom officials on the capabilities of the Arleigh Burke, according to a report in Defense News.

Since then, little information has been released on the program.

Lockheed Martin Corp., Mission Systems and Training, Baltimore, Maryland, is being awarded a $235,329,189 firm-fixed-price contract for MK 41 Vertical Launching System (VLS) electronic and mechanical modules and related equipment. The MK 41 VLS provides a missile launching system for CG 47 and DDG 51 class surface combatants, surface combatants of allied navies, and Aegis Ashore requirements for the Missile Defense Agency’s Ground Ballistic Missile Defense Program. This contract includes options which, if exercised, would bring the cumulative value of this contract to $356,794,617. This contract combines purchases for the U.S. Navy (69.5 percent) and the governments of Saudi Arabia (26.3 percent) and Norway (4.2 percent) under the Foreign Military Sales Program. Work will be performed in Baltimore, Maryland (95.1 percent); Orlando, Florida (4 percent); and Clearwater, Florida (0.9 percent), and is expected to be completed by March 2022. Fiscal 2013 and 2014 shipbuilding and conversion (Navy); fiscal 2014 Defense-wide procurement funds; fiscal 2014 other procurement (Navy); and fiscal 2014 research, development, test and evaluation funding in the amount of $235,329,189 will be obligated at time of award. Funds in the amount of $240,287 will expire at the end of the current fiscal year. This contract was competitively procured via the Navy Electronic Commerce Online and Federal Business Opportunities websites, with two offers received. The Naval Sea Systems Command, Washington, District of Columbia, is the contracting activity (N00024-15-C-5332).