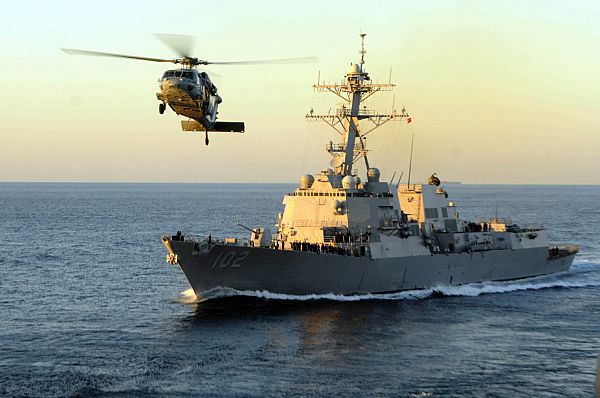 The crew from USS Sampson (DDG-102) has recovered several bodies from the Air Asia Flight QZ8501 and delivered them to Indonesia, according to a Friday report in the Associated Press.

A total of 16 bodies from the crash have been recovered in the search for the plane — believed to be at the bottom of the Java Sea — most found by the crew of Sampson.

The bodies have been taken via the ship’s MH-60R Seahawk helicopter to the Indonesian town of Pangkalan Bun.

A Friday AP photograph shows crew from the ship offloading the bodies from the helo.

Sampson has been on station assisting with the crash efforts since Dec. 30, 2014.
Air traffic controllers lost contact with the Airbus A320-200 two days earlier.

Poor weather has hampered the search for the missing airliner. Sonar equipment and hydrophones brought in from the French aviation accident investigation agency — Bureau d’Enquêtes et d’Analyses (BEA) — was unable to be used on Friday due to high seas.

A total of 162 people onboard are believed dead.