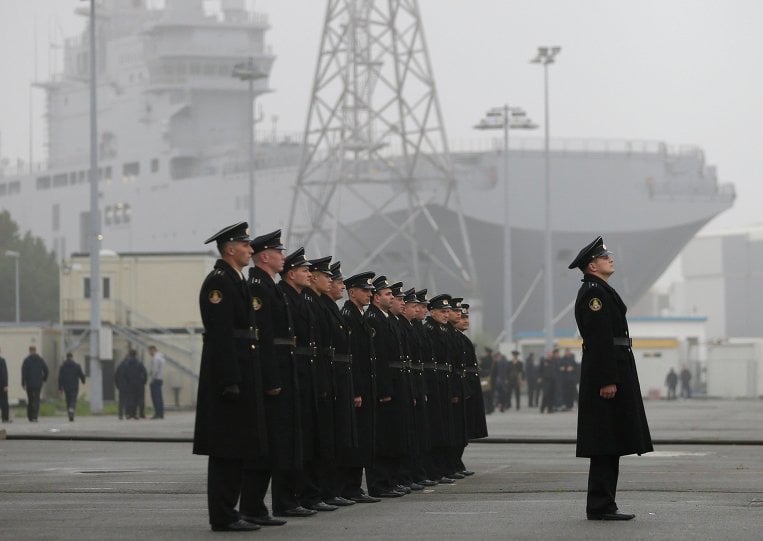 Russian sailors in French port of Saint-Nazaire via Reuters

The 400 sailors trained to operate the Mistral-class amphibious warship Vladivostok left the French port of Saint-Nazaire on Thursday, according to a video posted by a Saint-Nazaire city official.

The Russian Navy crew ship Smolny is seen in the video departing the port city around 2 p.m. local time (8 a.m. EST) to the waves of locals.

“Welcome back to the motherland and soon,” reads a translation from city official Jean Claude Blanchard’s Facebook page.
“Saint-Nazaire will miss you. Some Russian flags waving… goodbye friends.”

The departure of the sailors — who have been in Saint-Nazaire since June — is a sign that it will be increasingly unlikely France and Russia will resolve the stalled $1.56 billion deal for the two modified Mistrals before the end of the year.

Earlier this month Russian officials said they either wanted the ships or a refund for the ships.

“Both options will suit us — either the ships or the money. The money spent must be recovered,” Kremlin foreign policy aide Yuri Ushakov told reporters on Dec. 8, shortly after a following rushed meeting between Russian President Vladimir Putin and French President François Hollande in the Moscow airport.

In November, Russian officials threatened to sue France over the ships if they weren’t delivered by the end of the year.

The deal for the two 21,000-ton ships, modified to carry heavier Russian helicopters and operate in the Arctic, was originally stalled in September by the Hollande government following the increased unrest in Eastern Ukraine.

“The delivery of the helicopter carriers to Russia is connected with implementation of the Minsk accords,” Hollande said according to French newspaper Le Figaro in November.

The September Minsk accords outline conditions of the ceasefire between the Ukrainian government and Russian-backed separatists.

The future of Vladivostok and Sevastopol remains murky. There has been reported interest in turning the ships into mobile bases for the NATO rapid reaction force currently under development or selling the ships to the Canadian Navy to revive the country’s joint support ship (JSS) concept to replace the service’s aging oilers.