When the inhabitants of Scotland voted three months ago to remain part of the United Kingdom, their decision preserved not only a 307-year-old union with England and Wales but also two sites of crucial strategic importance.

Nestled beneath heather-clad hills on the shores of adjacent sea lochs 25 miles northwest of Glasgow, the Royal Navy (RN) submarine base at Faslane and the nuclear weapons depot at Coulport were both earmarked for closure under the Scottish National Party’s plans for independence.

Had the avowedly anti-nuclear SNP triumphed in the 18 September referendum—a feat it very nearly pulled off—then the future of Britain’s Trident ballistic-missile force would have looked as bleak as those same hills under the gray skies of a northern winter.

The RN’s Vanguard-class SSBNs could conceivably have been re-based on England’s south coast, but the task of finding a new site for the nuclear warheads arsenal would have been fraught with difficulties, and getting it built by 2020—the SNP’s deadline for removing “weapons of mass destruction” from Scottish soil—pretty much impossible. The inevitable result would have been unilateral nuclear disarmament. 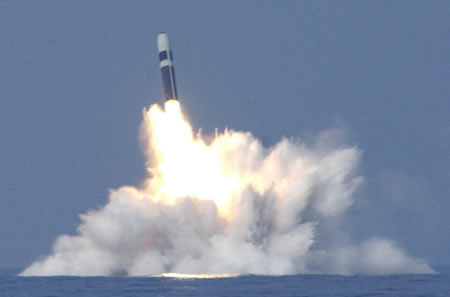 With the U.K.’s status as a sovereign country assured, and with the major political parties in London committed to retaining an independent nuclear deterrent, the big question now is, what will replace the four Vanguard-class boats when they begin to retire from service in or around 2028?

Commissioned into service between 1993 and 1999, HMS Vanguard, Victorious, Vigilant, and Vengeance were originally designed for a 25-year lifespan; however, this has been extended by up to 13 years, postponing the requirement for a new class of SSBN and bringing the procurement timeframe into line with the Ohio-class replacement program (the oldest U.S. boomer, USS Henry M. Jackson, is scheduled to leave service in 2027).

Concept work on Britain’s so-called Successor SSBN began in 2007, with the Ministry of Defense appointing an industry team consisting of shipbuilder and design lead BAE Systems plus Babcock (providing the torpedo handling/launch system, signal ejector system, and through-life support expertise) and Rolls-Royce (responsible for the nuclear steam-raising plant). The MOD approved the “initial gate” business case for the new submarines in 2011, releasing funds for a five-year assessment phase intended to bring the design to 70 percent maturity.

In 2013 the MOD released a concept image depicting an aggressively raked sail, X-shaped stern, and bowplanes located below the waterline when the boat is surfaced. Displacing about 17,000 tons, Successor will be slightly larger than the UK’s current SSBNs.

Propulsion system components, high-grade steel for the pressure hull and other critical long-lead items for the first ship have now been ordered and some manufacturing activities have started. The “main gate” procurement decision—giving the go-ahead for full production—is expected in mid-2016.

By aligning the procurement of the Vanguard and Ohio replacements, the U.K. opened up opportunities for collaborative work with the United States in several areas, notably the design of the common missile compartment (CMC) and the nuclear powerplant, and the integration of sonar arrays and associated combat systems.

Although Successor will be fitted with three quad-pack CMC modules, providing 12 launch tubes for Trident D5 ballistic missiles (down from Vanguard‘s 16 tubes), the British government has decided that just eight operational missiles will be routinely carried on patrol. General Dynamics Electric Boat will supply outfitted tubes—87 inches in diameter and 45feet high—for CMC assembly in the U.K.

In October this year, the U.S. Navy awarded Electric Boat $84 million to start CMC missile tube manufacturing: 12 for the Successor lead ship, four for the Ohio replacement program and one for the Strategic Weapons System-Ashore test facility at Cape Canaveral.

Meanwhile Rolls-Royce is developing the RN’s third-generation pressurized water reactor (PWR3) with technological support from the United States, under the terms of a 1958 intergovernmental agreement to share atomic energy technology for defense purposes. The PWR3 design has benefitted in particular from lessons learned with the S9G reactor that powers the Virginia-class hunter-killers.

Compared with the Vanguards’ PWR2 system, the PWR3 has a simpler circulation design and should be easier to operate. According to Rolls-Royce, it promises a “huge improvement in terms of safety, integrity and availability, while at the same time reducing the through-life costs.”

Meanwhile, the U.K. is also participating in the U.S.-led Trident missile life-extension program, which will keep the D5 ballistic vehicle—capable of delivering up to 12 independently targetable warheads—in service into the 2040s.

One major decision remains outstanding: Whether to replace the Vanguards on a one-for-one basis, at an estimated cost of $17.28–$22 billion (at 2006/07 prices), or attempt to benefit from improved reliability and maintainability by ordering just three submarines. However, the cost savings inherent in a three-boat solution would be small compared with total program expenditure, and the RN believes that four SSBNs is the minimum required to maintain a credible and continuous at-sea deterrent.

“We have a proud history of collaboration with the United States on submarine programs and I’m pleased to say that continues today,” Will Blamey, the Successor program director at BAE Systems Submarines told USNI News.
“We’re more than halfway through the five-year assessment phase and are making good progress with the submarine design. We’re fully focused on achieving our program objectives and remain confident the first submarine will be in service by 2028.”