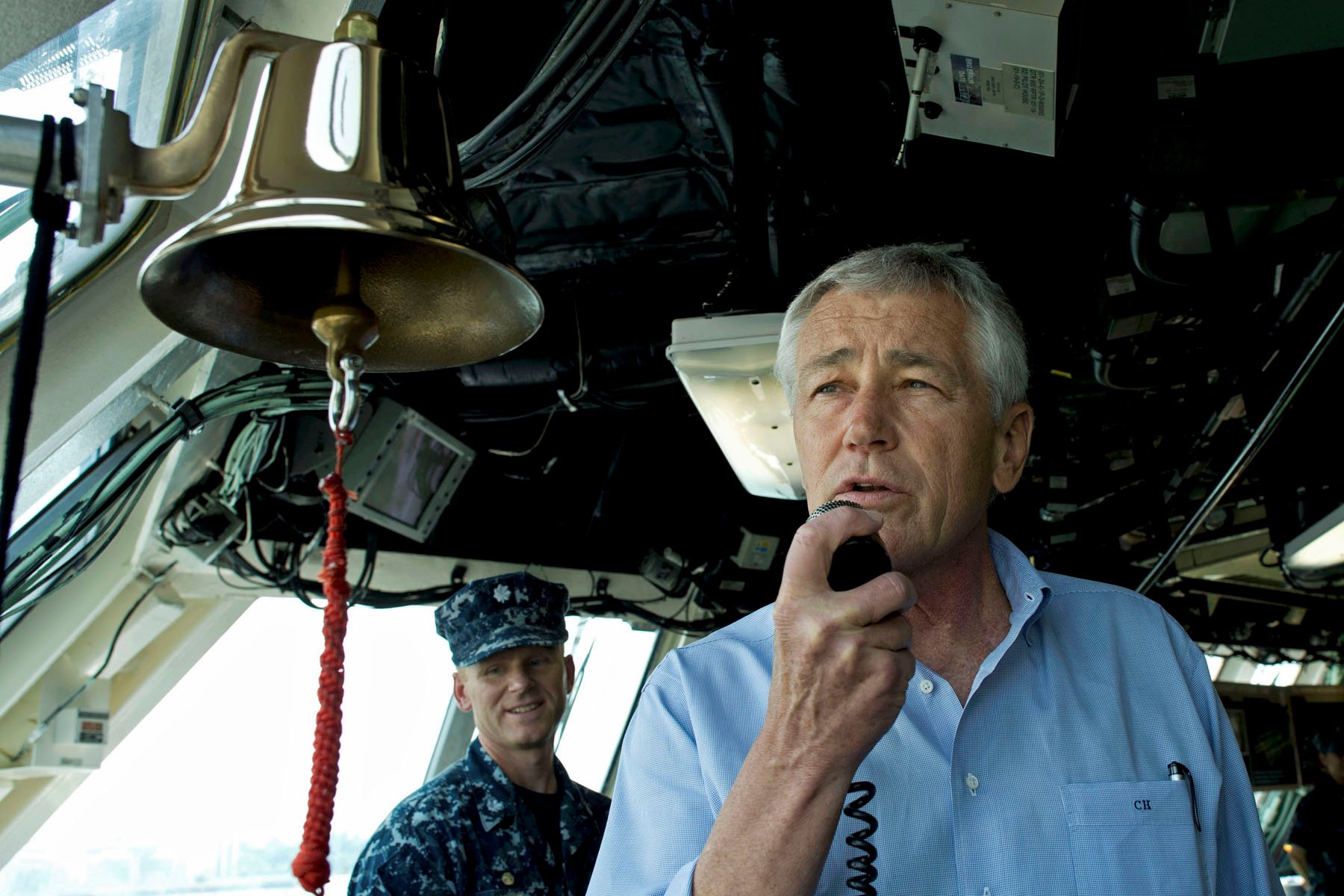 Secretary of Defense Chuck Hagel addresses the crew of the littoral combat ship USS Freedom (LCS-1) in Singapore on June 2, 2013. US Navy Photo

Despite the announcement of his resignation, Secretary of Defense Chuck Hagel will continue to, “keep his foot on the pedal and moving forward,” in his current role, Pentagon spokesman Rear Adm. John Kirby told reporters on Tuesday.

That includes the selection of the way ahead on the follow-on to the Littoral Combat Ship (LCS) — the Small Surface Combatant (SSC), defense officials confirmed to USNI News on Tuesday.

“The secretary is going to stay at the job and stay at work and continue to do the things that he has been doing the last two years,” Kirby said during the press briefing, according to the Pentagon backed DoD News agency.

“It’s very much for him about, you know, continuing to keep — to keep his foot on the pedal and moving forward.”

Hagel will remain in the position until a successor is confirmed by the Senate — likely not until the new year.

So at least until January, Hagel will continue in his role.

“He’s very much focused on implementing the recommendations and changes that he has accepted from the reforms that we put in place … [and] also working with the groups that he has working on other reform initiatives he has out there,” Kirby said.

For the Navy, the largest acquisition initiative will be the direction on the SSC program.

Since the beginning of the year, the service has been tasked by Hagel to create a 20-ship class to replace the last of the planned 52 Flight 0 LCS.

As of Tuesday, the decision from Hagel was still pending but expected soon, according to defense department sources.

Navy officials told USNI News on Tuesday, Hagel has been briefed but as not made a final decision on the follow-on platform.

In January, the Defense Department issued a memo directing the Navy to examine either an up-gunned variant of either the current Lockheed Martin Freedom or Austal USA Independence LCS hulls (or both), a foreign design or an entirely new ship for the SSC.

Earlier this month Chief of Naval Operations (CNO) Adm. Jonathan Greenert said, “the secretary is very close to a decision,” according to an interview in Reuters.
“It was our endeavor to provide an option which would provide a more lethal ship, one that is more survivable, with capabilities that can be back fit, and as much as feasible, not interrupt production.”

Given the brevity of the SSC process and the costs of pursuing a new design — USNI News understands the SSC will be based on one or both of the existing LCS designs. The new version of the ship will likely include a 3D air defense radar, some type of offensive anti-air missile and perhaps an over-the-horizon anti-surface missile — which both Austal and Lockheed have included in offerings for foreign military sales (FMS).

In addition to the LCS decision, Hagel will also continue to work on the so-called U.S. rebalance to the Pacific, Kirby said on Tuesday.

“The secretary has made six trips to the region since he’s been secretary … He has been very, very much a point man on the Asia-Pacific rebalance, securing important agreements with many countries over there for increased U.S. rotational presence,” he said.