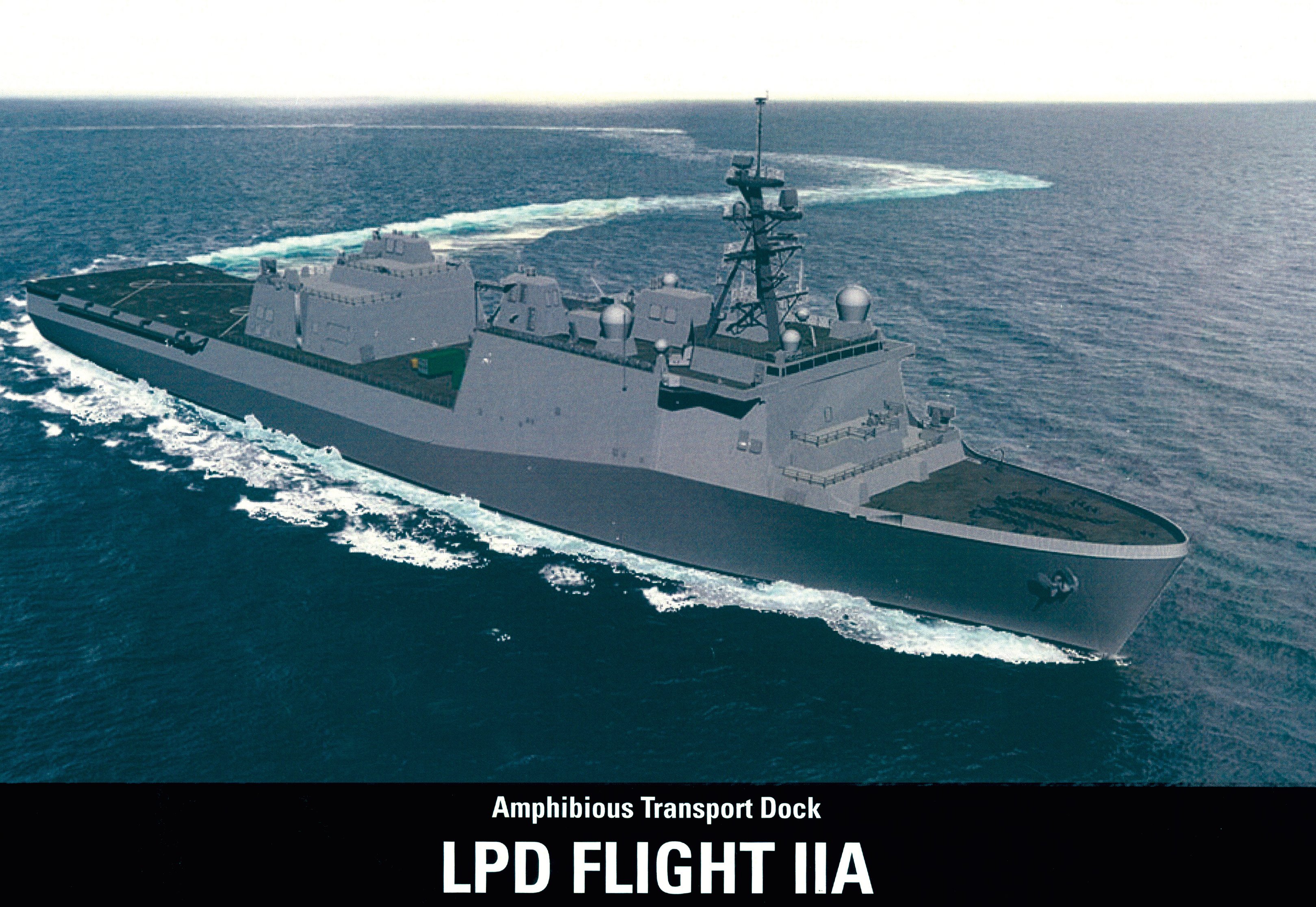 NORFOLK, VA — Huntington Ingalls Industries (HII) has revised its plan to use the hull form of the San Antonio-class amphibious warship (LPD-17) as a candidate for the Navy’s next generation amphibious warship— LX(R), company officials outlined to USNI News on Tuesday.

HII has pitched variants of the LPD-17 hull for at least two years to the Navy for everything from a ballistic missile defense (BMD) platform to a candidate for LX(R) as LPD Flight II.

HII’s new Flight IIA — mocked up by HII earlier this year — modifies the original LPD-17 original design by removing some of the higher end capabilities of the San Antonio and creating a so-called amphibious truck to replace the existing class of aging Whidbey Island and Harpers Ferry 16,000-ton landing ship docks (LSD-41/49).

Though the concept isn’t news, last month’s revelation that the San Antonio hull will be the basis for LX(R) — according to a memo from the Secretary of the Navy Ray Mabus — and HII’s ongoing consultation with the service with the design work for the new ship gives greater credence to the company’s plan.

The largest improvement in capability will be to the ship’s communication and aviation ability.

The current LSDs have a minimal command and control (C2) capability – the ability to communicate with other U.S. military forces and coordinate different types of aircraft and smaller vessel — and no native ability to host and maintain the aircraft of the trio of ships that make up the Navy’s Amphibious Ready Groups (ARGs). 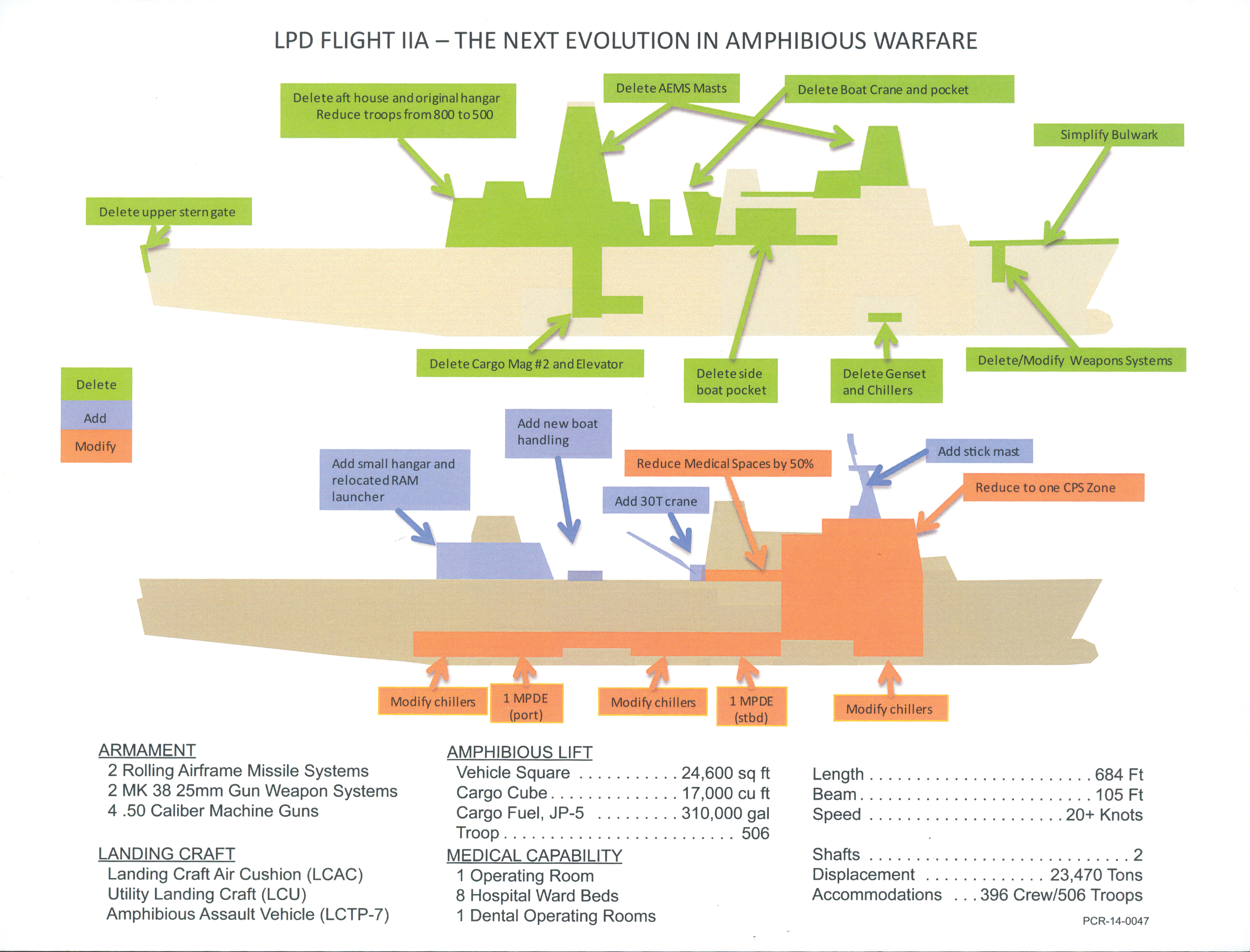 At their inception, the LSDs “was really just a truck to always be married up with ARG and never go away from it,” carrying vehicles and landing craft as a compliment for the ARG LPD and big deck amphibious warships, Marine Maj. Gen. Robert S. Walsh, Director Expeditionary Warfare Division (N95), told USNI News on Wednesday.

However, modern operations have required the ARGs to split up and undertake different missions — at times hundreds of miles away from the other ships in the group.

The LSDs are currently the weakest in C2 and aviation maintenance arena of the trio.

HII’s LPD Flight IIA features a hangar smaller than the one on the LPD-17 capable of stowing two MV-22 Ospreys and eliminates the composite masts of the current San Antonio-class design. 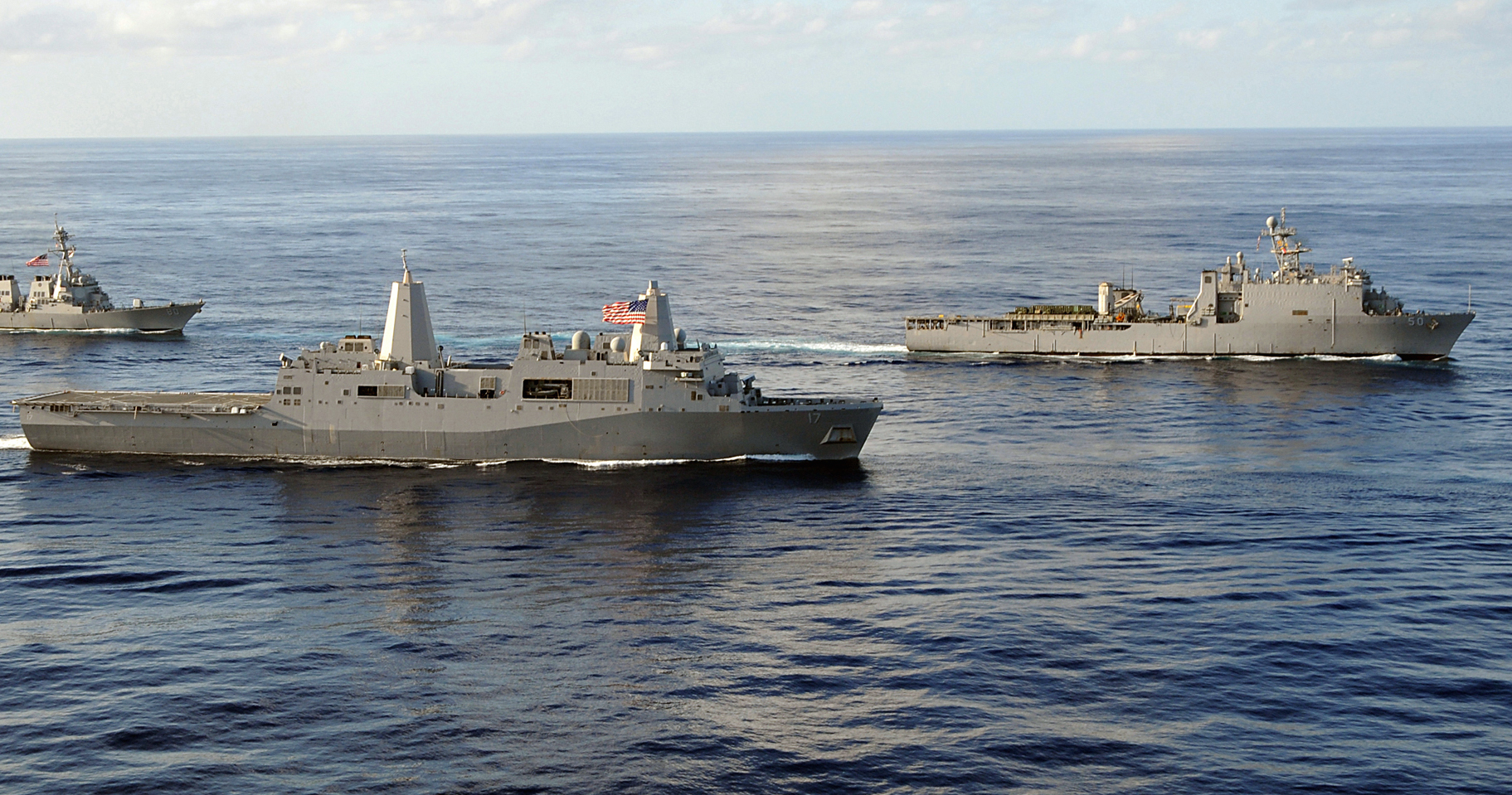 The LX(R) will be much bigger than the ships it will be replacing — displacing about 7,000 more than the current LSDs at 23,470 tons, HII officials told USNI News on Tuesday.

The Flight IIA retains about half of the medical spaces on the LPD. Company officials also said the current iteration would feature two spots for the Navy’s LCAC hovercraft or one utility landing craft (LCU) — which is in line with the Navy’s current thinking for requirements for the LX(R), USNI News understands.

Other changes include reducing the troop capacity from 800 to 500 with a crew of about 400 sailors.

Though HII is original designers and builders of the LPD-17 ships, they are not guaranteed the design and construction contract for the new LX(R) ship class. General Dynamics NASSCO in San Diego, Calif. has also helped the Navy in its current push to lower the cost at the start of the acquisition process and is considered likely to bid on the final work.

“Both HII and NASSCO were helping with ideas on how to drive cost down,” Walsh said.
“When I say competition, we’d look at anyone who could compete and plan it, but those would certainly be two shipyards that would have the ability to compete in this environment.”

The Navy’s frontend analysis of alternatives process for LX(R) has been described as, “the best ship design conversation we’ve had in a long time inside the government,” NAVSEA chief Vice Adm. William Hilarides said in May.

HII officials didn’t give USNI News a cost estimate for their version, but according to past information from the Navy a San Antonio LX(R) could cost about $1.64 billion for the lead ship with follow-ons costing about $1.4 billion for a total of 11 ships.

However, recently the service has been reluctant to put a cost figure on the LX(R) program.