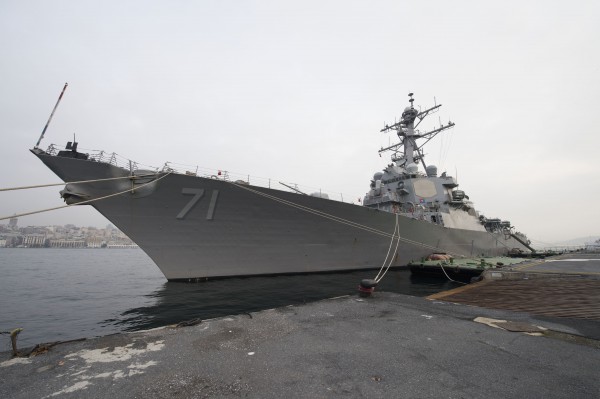 Three Ross sailors on liberty were allegedly assaulted on Wednesday by a Turkish youth group but the Navy said the attack — currently under investigation — did not affect the ship’s scheduled departure.

Ross is now bound for its homeport in Rota, Spain, according to the service.

“While in the Black Sea, the Romanian navy vessels ROS Rosca (263) and ROS Macellariu (265) participated in an underway engagement with Ross. This involved a series of at-sea scenarios designed to enhance maritime capabilities and advance our bilateral partnership with the Romanian navy,” according to a Thursday statement from U.S. 6th Fleet.

The training included boarding and interdiction exercises and a simulated missile attack using two Romanian Mig-21 fighters that, “allowed the ships to practice targeting using fire control radars and to train lookouts for detection of enemy aircraft,” read the statement.

Ross is one of several U.S. and NATO ships that have held a rotational presence in the Black Sea following the forced annexation of the Crimean region of Ukraine. The ship entered the Black sea on Nov. 4.

Meanwhile, local Turkish officials and the U.S. Embassy are investigating the alleged assault of the three Ross sailors by a group of about 20 Turks while on liberty.

In a video of the attack, the sailors were quickly surrounded by the men waving Turkish flags, chanting “Yankee, go home.”