Two-thirds of HII’s Newport News Shipbuilding unit business is based around building carriers and their mid-life refueling and complex overhaul (RCOH). Earlier this year Secretary of Defense Chuck Hagel said George Washington would be defueled and decommissioned if the Pentagon continued to operate under the sequestration funding restrictions as part of the 2011 Budget Control Act (BCA). HII is also waiting on budget approval for $1.3 billion of Fiscal Year 2015 (FY 2015) incremental funding for the $11.49 billion Kennedy. 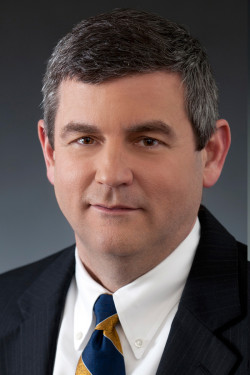 “With this in mind, we are concerned that continued delays in award of the RCOH planning and execution contracts as well as delay of the detailed design and construction contract for CVN-79, John F. Kennedy, it is creating pressure on our programs at Newport News,” Petters said during the call following the company’s third quarter earnings report.

George Washington’s RCOH contract, in particular, has been a contentious political issue.

“The Navy has decided to continue planning efforts for [RCOH] of the George Washington and is working to reallocate investment across the future year defense plan to fund the RCOH air wing, manpower and support… Newport News was awarded a contract to begin planning of defueling work on George Washington as another positive step toward an anticipated contract for the full RCOH in Fiscal Year 2015 (FY 2015),” Petters said.

“However, the scope of work for planning the defueling work is only a small portion of the full planning effort we need to be performing to prepare for the RCOH.”

The Navy and its shipbuilders consistently stress the key to cost saving and preservation of the industrial base is predictability.

“Across the board in shipbuilding, our priority is the affordable solution, and the key to affordability is stability—in requirements, build rates, quality and wholeness for our fleet at sea through modernization and maintenance,” Sean Stackley, assistant secretary of the Navy, Development & Acquisition (RDA) said in an interview in Proceedings in 2013.

Aside from the carrier contracts, HII had a positive outlook with 39 percent increase in profit from the same quarter last year — from $69 million to 96 million, reported The Daily Press of Newport News, Va.