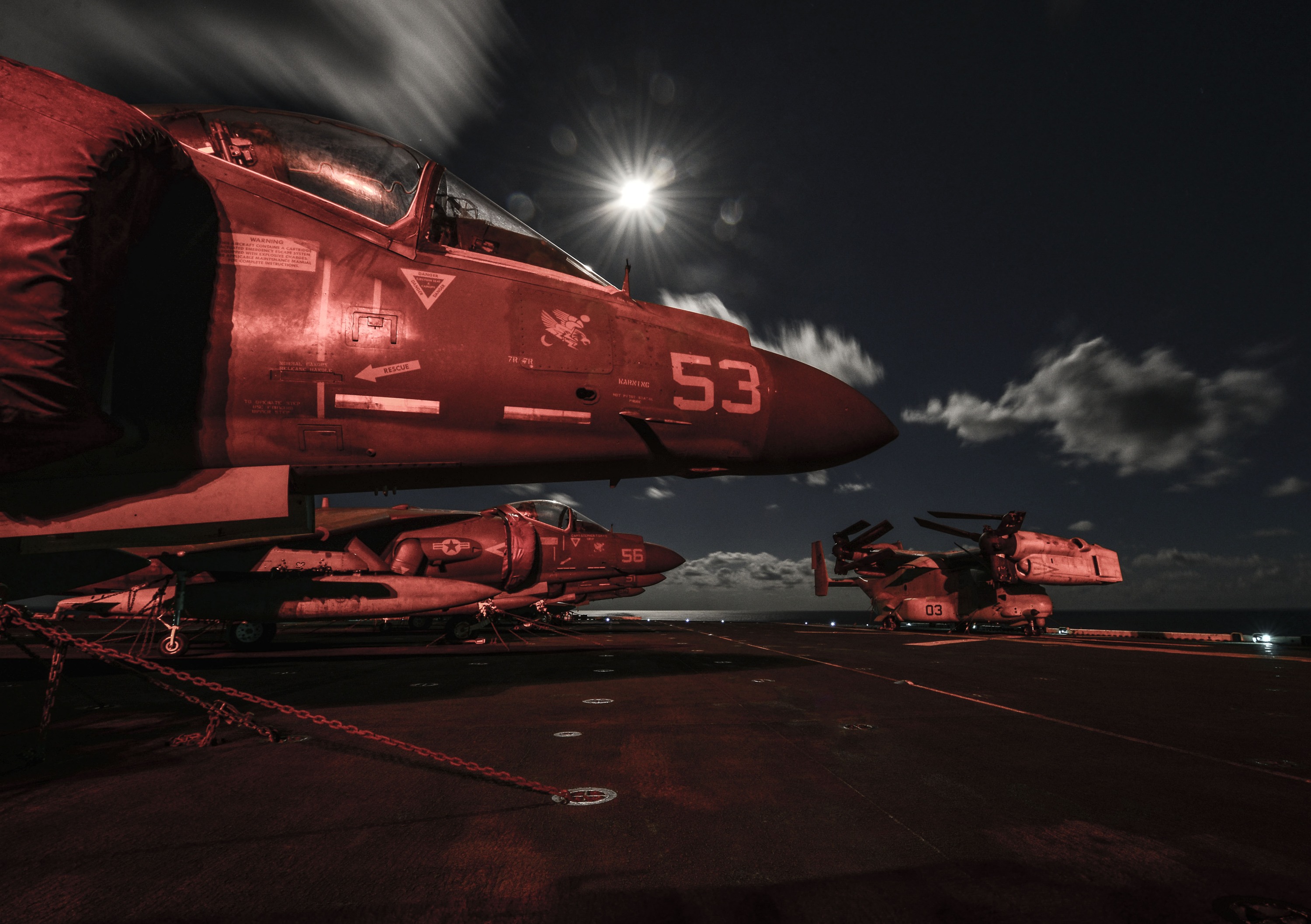 AV-8B Harriers sit on the flight deck at night aboard the amphibious assault ship USS Bataan (LHD-5) on Oct. 3, 2014. US Navy Photo

The U.S. Marine Corps will phase out the Boeing AV-8B Harrier II jump jet by 2025 — about five years earlier than planned — and will instead extend the life of its fleet of aging Boeing F/A-18 Hornet strike fighters, according to the service’s recently released 2015 aviation plan.

In previous years, the service had said it would replace its increasingly older fleet of original model Boeing F/A-18A – D Hornet strike fighters before retiring the Harriers before replacing both fighters with the Lockheed Martin F-35 Lighting II Joint Strike Fighter (JSF).

Now, the Harrier will be retired in 2025 and the Hornets will hang on until 2029 for the active duty Marines.

“The TACAIR 2030 Roadmap is a departure from the previous AVPLAN’s TACAIR transition order,” reads the Marine Corps’ 2015 aviation plan.
“The F-35 transition continues per the program of record, while the AV-8B and F/A-18 order of transition has changed.”

The Marine short takeoff and vertical landing (STOVL) F-35B is planned to operational in the summer of 2015 will eventually replace the Harrier.

The Hornets will finally leave the Marine inventory in 2030 when the reserve component transitions to the F-35B. 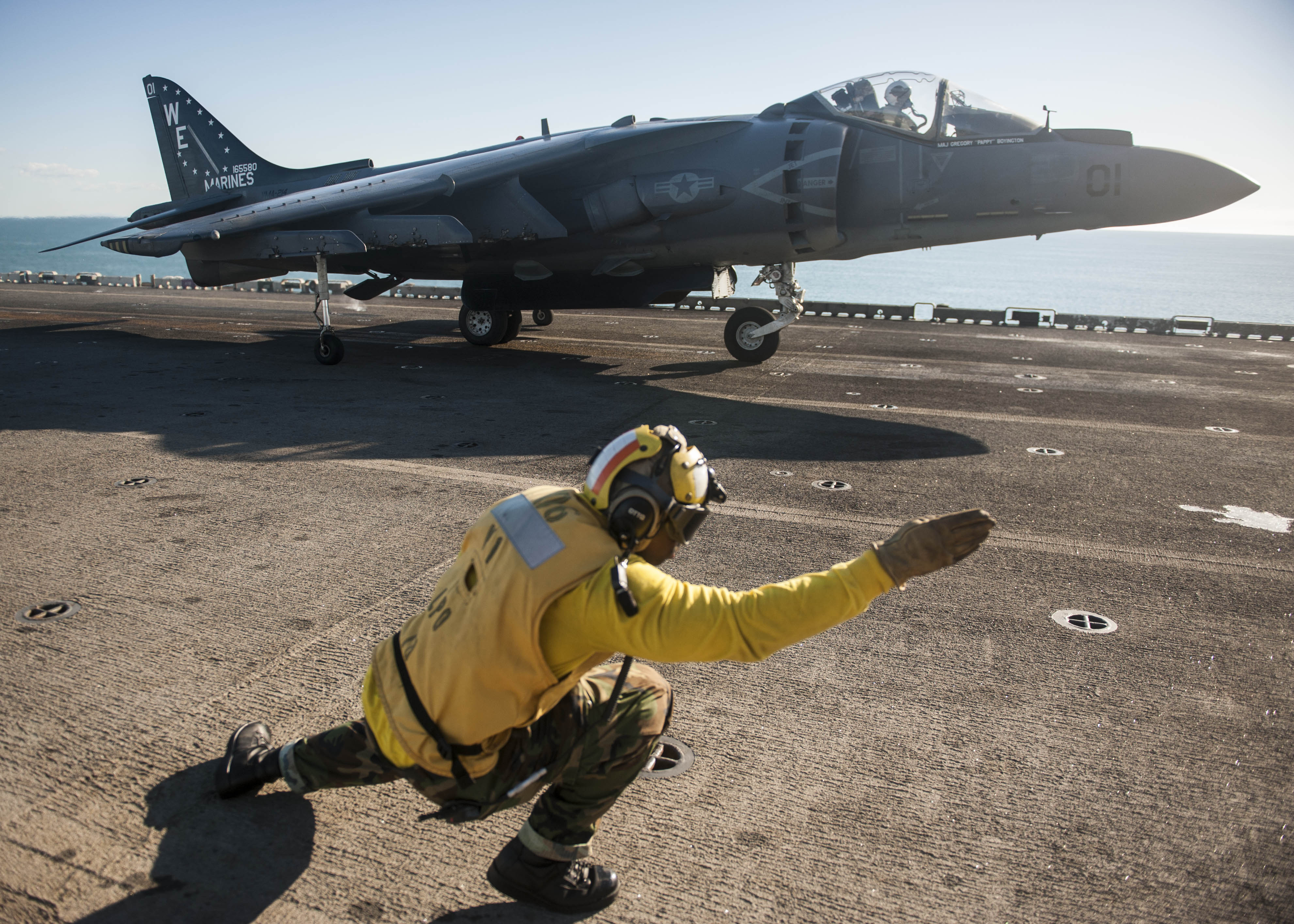 An AV-8B Harrier from the Black Sheep of Marine Attack Squadron (VMA) 214 on the flight deck of the amphibious assault ship USS Bonhomme Richard (LHD-6) on Aug. 4, 2013. US Navy Photo

“Visibility and Management of Operating and Supporting Cost (VAMOSC) analysis estimated changing transition order would result in cost avoidance of over one billion dollars through 2030,” the document reads.

The remaining East Coast Harriers will be retired 2025. In the meantime—since the AV-8B still has another 11 years to go in service—the Marines will focus on improving the fleet’s readiness.

“The AV-8B program will continue to focus on readiness by solving chronic parts inventory shortfalls. In 2015 the aircraft will transition support from Boeing to NAVSUP [Naval Supply Systems Command],” the document reads.

The Marines are also planning on integrating the AIM-120C/D AMRAAM and AIM-9X Block II air-to-air missiles onto the AV-8B. Flight testing of the AMRAAM onboard the Harrier is slated for 2016. 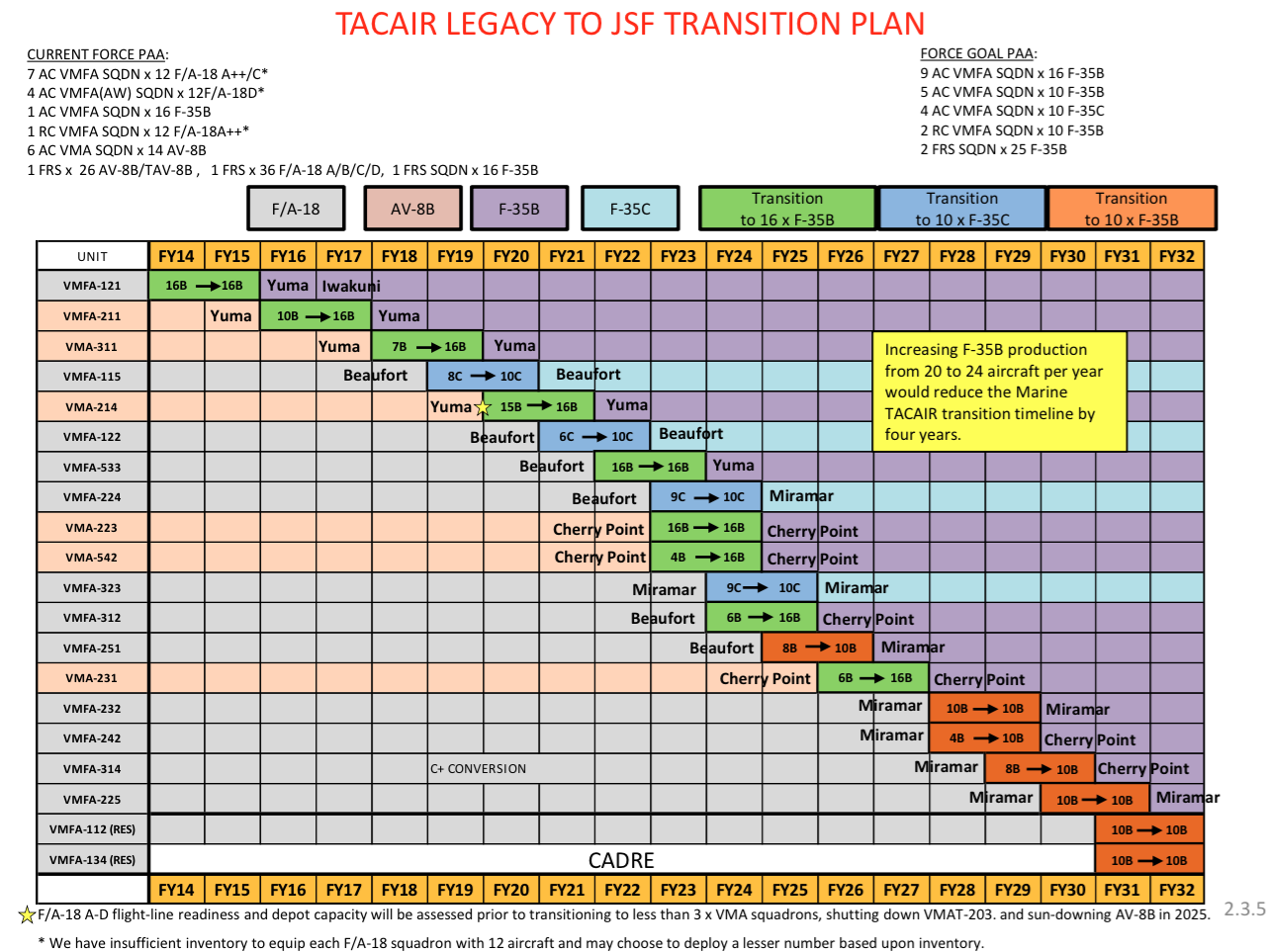 Meanwhile, the Hornet fleet will have to be modified stay in service. The Navy and Marines have implemented a Center Barrel Replacement Plus (CBR+) program to increase the service life of 200 Lot 17 and below Hornets.

Further, a High Flight Hour (HFH) inspection has extended the life of 110 F/A-18 A-D aircraft beyond 8000 hours with another 129 aircraft awaiting inspections. In addition to those efforts, a Service Life Extension Program (SLEP) will modify about 150 hand selected F/A-18 C/D aircraft so that they will be able to fly up to 10,000 hours.
The SLEP program has run into serious delays because of personnel shortages resulting from the sequestration cuts to the Pentagon as part of the 2011 Budget Control Act (BCA) , several sources told USNI News.

The problem is so severe that when the Department of the Navy pulled engineers from the Super Hornet program to help resolve the issue, it has also caused a severe readiness shortfall on the F/A-18E/F program, USNI News understands. 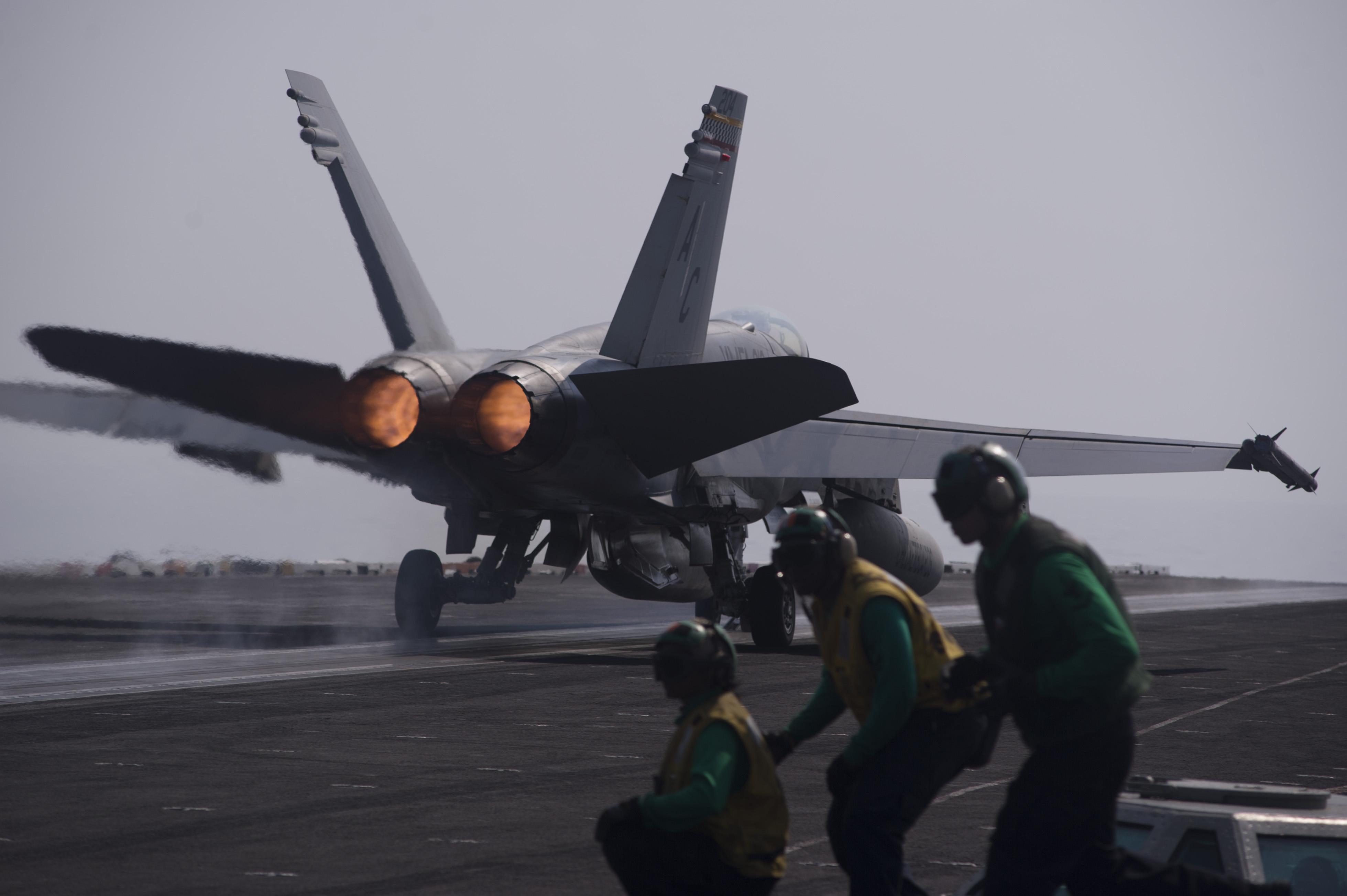 An F/A-18C Hornet, assigned to the Checkerboards of Marine Fighter Attack Squadron (VMA) 312, launches from the flight deck of the aircraft carrier USS Harry S. Truman (CVN-75) on Oct. 13, 2014. US Navy Photo

The Marines acknowledged part of the problem in the document: “The USMC F/A-18 A-D community is enduring a sustained shortage in excess of 40 aircraft fleet wide due to “Out Of Reporting” (OOR) maintenance.”
The Marine Hornets are also going to be upgraded with new computers and displays. The jets will also receive new weapons.

Both the Hornet and Harrier—along with Northrop Grumman EA-6B Prowler–will be replaced by the F-35. The Marines hope to buy a total of 353 F-35Bs and 67 F-35Cs.

The Marines’ plans is to have nine squadrons with 16 F-35Bs, five squadrons of 10 F-35Bs and four squadrons of carrier-based F-35Cs with ten jets each. There would also eventually be two reserve squadron of 10 F-35B aircraft each and two 25-aircraft F-35B training units.

It will take the Marines until 2030 to completely transition to the JSF, but the Marines hope to boost production of the jet.

“Increasing F-35B production from 20 to 24 aircraft per year would reduce the Marine TACAIR transition timeline by four years,” the document said.