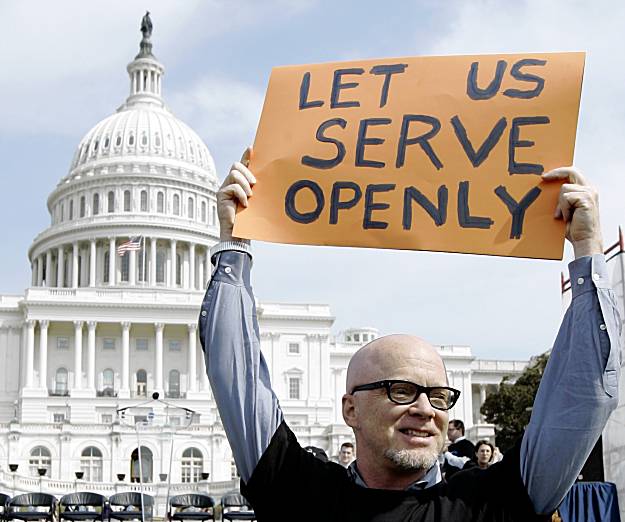 On September 20, 2011 – the U. S. military did away with the policy known as Don’t Ask, Don’t Tell (DADT) and began allowing gay and lesbian military people to serve without having to hide their sexual orientation.

What has changed in the subsequent years? A recent investigation showed extraordinary transformation on the one hand — particularly in the realm of law and regulation — but also pointed up yet-unresolved administrative matters, and a still-evolving military culture.

Certain issues the military implies are out of its control, though, put some gay and lesbian military families into a category of service perhaps best described as, “almost equal.”

For instance, retired Air Force Lt. Col. Chris Rowzee of the American Military Partner Association reported that State Department-negotiated Status of Forces Agreements between the U. S. and some governments hosting U. S. military bases — Germany among them — preclude same-sex spouses from obtaining the same “duration of the service member’s assignment” visas afforded to heterosexual military spouses.

And because many religious groups endorsing individuals for duty as military chaplains believe homosexual relationships violate basic faith tenets, retired Army Col. Ron Crews — executive director of the group Chaplain Alliance for Religious Liberty — noted that unit-level marriage enrichment programs are sometimes cancelled these days if a same-sex couple signs up to participate and the unit cannot find a chaplain whose endorsing faith group allows him or her to provide such services to gay or lesbian service members.

Finally, a significant number of military people I spoke with while recently producing an audio documentary on the military three years after DADT expressed the view that in certain occupational fields, even now, it would be difficult for a gay or lesbian service member to be truly candid about their sexuality.

“To speak bluntly,” observed one expeditionary force sailor, “there’s a lot of aggressive people in certain fields, and typically homosexuals are not the people that fit in to that mentality. And an aggressive person can make it very uncomfortable for people to really let their guard down, and show what they’re all about.”