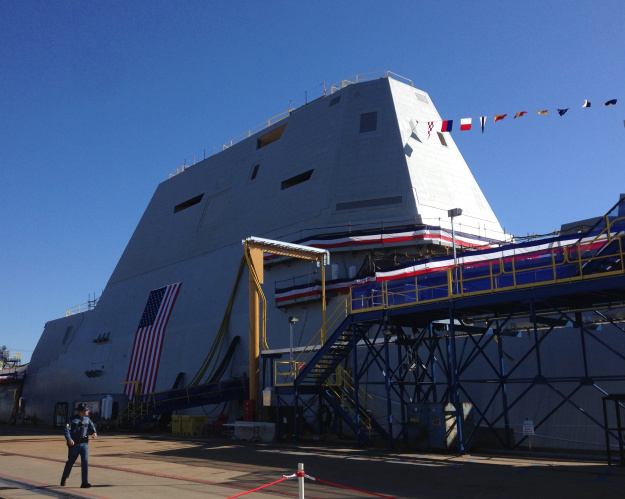 The Navy has started the massive gas turbines in its latest class of guided missile destroyer ahead of the ship’s commissioning next year, Naval Sea Systems Command (NAVSEA) announced on Thursday.

The first-in-class Zumwalt (DDG-1000) fired up the two Rolls Royce MT-30 and two smaller Rolls-Royce RR450 gas turbines this week as part of testing the ships new integrated power system (IPS) that will use the combined 80 mega-watt power to power the ship and its new advanced induction motors (AIM).

“Light-off of DDG-1000’s generators is a critical step forward in the activation, test, and trials of the ship’s systems,” said Capt. Jim Downey, DDG-1000 program manager in the Thursday statement.

Unlike traditional gas turbine arrangements on U.S. naval ships, the 36 mega-watt MT-30s and 3.8 mega-watt RR450s will drive a ship-wide electrical grid. Instead of having a direct mechanical connection to the ship’s propellers or water jets, the turbines will route power electrically to complex electrical motors that will drive the ship — crucial to the Navy’s IPS concept.

IPS is the Navy’s most mature expression of the so-called decades-old electric ship concept.

The core of the idea is by removing the direct mechanical connection from the turbines commanders have more options to route power to weapon systems or sensors.

Through IPS the amount of raw power is increased making the three planned Zumwalts ideal test platforms for next generation weapons like high energy lasers or electro magnetic railguns.

The Navy’s surface warfare requirements arm will closely study the IPS on the ships ahead of the development of the Navy’s next large surface combatant, Vice Adm. Thomas Rowden, then director of surface warfare (N96) for the Office of the Chief of Naval Operations (OPNAV), told USNI News in January.

“I think a lot of the technologies that we are putting on 1000 to 1002 are going serve us very well as we drive toward these [new] ships.”

The Navy plans to field a total of three of the 16,000-ton Zumwalts.