The start of U.S. airstrikes in Syria early Tuesday morning local time marks a major expansion of the air campaign begun in northern Iraq to target the Islamic State of Iraq and Syria (ISIS or ISIL).

A mix of bombers, sea-launched Tomahawk Land Attack Missiles (TLAMs), F-15E, F-16, and F/A-18s, along with unmanned aircraft and supporting platforms from Arab allies — possibly including Jordan, Saudi Arabia and the United Arab Emirates — hit around 20 fixed targets including ISIS’s stronghold of Raqqa.

So far, these strikes have targeted the organization’s fixed infrastructure, unlike those in Iraq which seem to have predominantly targeted massed but mobile combat troops using technicals and captured military vehicles in the field.

However, the Obama administration has ruled out targeting the Assad regime from its air campaign, unless Assad chooses to engage U.S. forces targeting ISIS.

Concern about Syria’s substantial Integrated Air Defense System (IADS) and the efficacy of no-fly zones, safe zones, and punitive strikes appeared to dissuade U.S. planners from an aerial campaign against Assad in Syria.

Now, in addition to the unique considerations of targeting the formidable insurgent group in two states, many wonder how those same concerns about operations in Syria are shaping U.S. operations against ISIS. 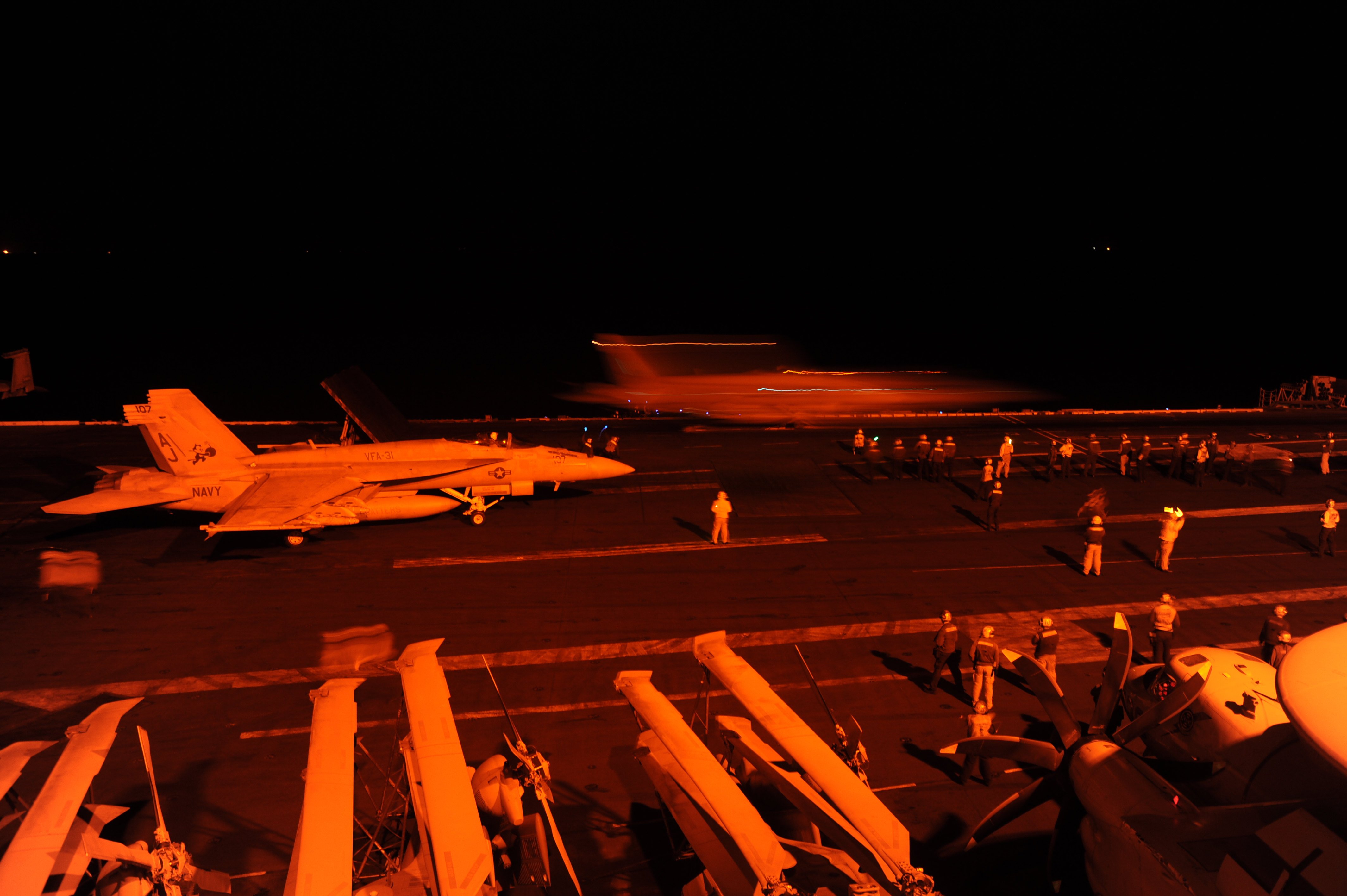 The first major consideration is that many of the areas ISIS is more powerful are the weakest in Syrian air defense capability.

The regime concentrates its air defenses in western Syria, where the majority of the population and critical infrastructure is located. These areas had more dense and overlapping networks of surface-to-air missile (SAM) batteries and early warning radars.

Assad’s regime particularly focused these defenses around Damascus, Homs and Hama, as well as the Mediterranean coast – the most likely avenue of approach for Israel or Western attackers.

Syrian SAM emplacements are sparser in Idlib and Aleppo governorates and sparser still in the cities on the Euphrates and Khabur rivers in eastern Syria where ISIS has its strongest grip.

While some areas of northern and western Syria are within the range of Syria’s more capable S-200 batteries, the relatively low density of SAM coverage allows a wider range of techniques to limit exposure and limit the requirements for U.S. forces engaging IADS in those areas. Opposition groups have already seized or rendered inoperable some of the air defense sites in northern Syria, such as the S-75 emplacements in Taaneh.

The most vulnerable aircraft are Syria’s low-flying gunships and transport helicopters it has adapted into improvised ground attack aircraft using barrel bombs, but L-39 trainers and Syrian MiG-23 and Su-22 fighter-bombers have also fallen prey to opposition systems.

So far, opposition capacity for utilizing more sophisticated SAMs such as the captured S-75s appears limited or nonexistent. ISIS, like other non-state actors in Syria, certainly has access to anti-aircraft guns and MANPADS.

Its recent capture of Taqba airfield appeared to include an unknown amount of 9K38 Igla missiles, a relatively sophisticated MANPADS. ISIS frequently deploys multibarrel anti-aircraft guns on its technicals against ground targets and could use them to threaten low-flying aircraft.

However, ISIS operators still likely have limited training for anti-air roles, and the relatively low engagement ceilings for these systems give Allied aircraft myriad options for reducing their exposure to these tactical air defense systems.

For standoff strikes and limited raids against ISIS forces and infrastructure, U.S. countermeasures and training should prove adequate. These weapons would be a larger concern in the event that Allied forces need to conduct heliborne operations in Syria, such as search and rescue (SAR) for downed aircrews, or raids by Special Operations personnel like the abortive rescue attempt of Western journalists this summer.

So far, U.S. and Allied targets reportedly focus primarily on fixed infrastructure. The targets support ISIS’s logistics, training, and formal headquarters. Many of them, such as the Division 17, Brigade 93, and Taqba air force bases in Raqqa governorate, are former regime targets ISIS has overrun in recent months.

They also include the government buildings ISIS is using as headquarters facilities in Raqqa city. Hitting well-known regime infrastructure has several advantages. As highly-visible targets, in many cases in distinctly military facilities, strikes against them minimize risks of civilian casualties and do not require intensive intelligence efforts to select. ISIS’s captured equipment stockpiled in these areas make easy targets for U.S. and Allied airpower.

Efforts to disperse and disguise its infrastructure, equipment, and personnel within civilian population centers may significantly complicate future targeting and require greater collection and targeting efforts than the initial round of strikes. ISIS’s defensive tactics in Tikrit, where it has repelled two major Iraqi counteroffensives including special operations and armored units suggests it can revert to these more traditional modes of guerrilla defense with ease.

There are two alternative, but not exclusive, directions a Syrian air campaign against ISIS might expand into.

One would be the sort of targeting of massed forces, such as entrenchments, technicals and armored vehicles in the field, to reduce ISIS’s offensive combat power and its defensive power outside of more densely populated areas.

The majority of the nearly 200 sorties the U.S. launched in Iraq so far appear to involve these types of targets. In Iraq, these efforts appear to be successful in blunting ISIS offensives against major population centers and critical infrastructure under ISF or Kurdish control. They are also contributing to modest counteroffensive gains outside of major population centers.

However, their utility in Syria, where the U.S. has no comparable direct ground presence of advising personnel as it does with Iraqi and Kurdish forces, is likely to be far lower, since these strikes depend on localized collection and targeting in for their execution, and well-organized, coordinated ground activity to exploit their results. These conditions may emerge to a level satisfactory for the U.S. and Allied forces over time, but they are not immediately apparent.

Another course of action would be more extensive targeting of ISIS as an organization rather than simply the fixed infrastructure itself. Initial strikes appear to be oriented around visible infrastructure, but many want an intelligence-driven decapitation campaign modeled on U.S. efforts against al Qaeda and its affiliates in Yemen, Pakistan, and Somalia. The President himself has invoked these rationales.

However, organizationally, ISIS delegates significant power to battlefield commanders who can coordinate military operations at a regional level. Additionally, the current focus on infrastructure strikes in Syria and a combination of strikes on massed forces and infrastructure in Iraq suggests the comprehensive intelligence necessary to conduct a decapitation campaign against ISIS’s highest level leadership is currently unavailable and may only arrive after major investments of time and effort.

Furthermore, ISIS’s complex structure may make it more resilient to decapitation attacks than those the U.S. is familiar with, which themselves have had mixed results. Targeting personnel dispersed within the population will significantly increase the risk of civilian casualties and popular hostility at a time when Allied efforts to win Sunni Arab support in the fight against ISIS is critical.

Even after dozens of sorties in Iraq, ISF and Kurdish forces have yet to retake a major population center under ISIS control. Although airstrikes have contributed to ending ISIS’s rapid offensive gains there, it has yet to deliver major counteroffensive gains. Allied efforts to defeat ISIS or at least roll it back could still benefit from air power in a supporting role, provided units such as the Iraqi Special Operations Forces or those with embedded Allied advisors can coordinate effectively both with Allied air power and with each other as a disciplined ground force.

The success of major counteroffensives will depend on improvements in the organization and professionalism of ground forces and intelligence efforts in which airpower and standoff strikes can only play a secondary role. The major institutional problems with ISF have yet to be resolved, and the Kurdish forces the U.S. supports now have challenges of their own that will require internal reform. Politically, major reconciliation with Sunni tribes and cobelligerent insurgents is not yet in motion. Allied airpower will continue to play a role in these future stages of the war, and recent strikes on Syria demonstrate will broaden their pressure on ISF, but retaking and governing areas currently under ISIS control remains a long-term challenge for the Syrian rebel groups, Kurdish forces, and ISF whether they enjoy U.S. air support or not.