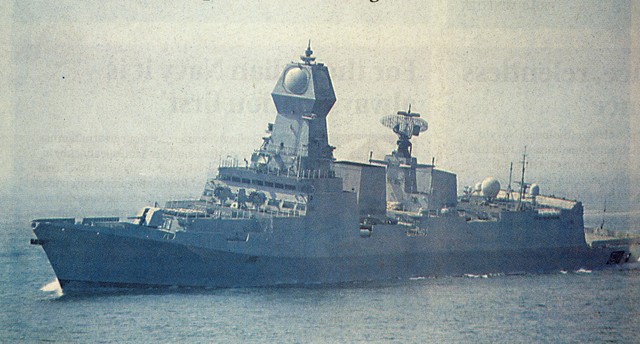 A 2013 newspaper photograph of destroyer Kolkata during sea trials.

The Indian Navy has accepted the first in a new class of guided missile destroyers into service on Thursday ahead of a formal commissioning that could come within a month, according to local press reports.

The ship class is leap ahead for the Indian Navy’s surface fleet, Eric Wertheim, author of Naval Institute’s Guide to Combat Fleets of the World told USNI News on Friday.

“The Kolkata-class is really a step forward for the Indians,” Wertheim said.

“It’s the first class that was really built with modern technology. This class really brings the Indian destroyer community into the 21st century.”

The Brahmos is an especially effective missile with a range of 157 nautical miles and speed of up to Mach 2.8, according to the 2013 edition of Jane’s Naval Weapons.

The missile — tested last month from Kolkata — has a greater range than the U.S. Navy’s current Harpoon missile and can travel more than three times the speed.

The acceptance of Kolkata comes three years later than scheduled and is billed by some as a demonstration of the Indian industrial base’s technical ability.