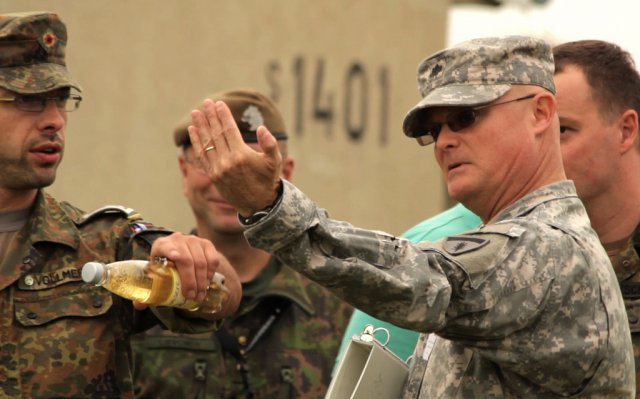 German and American soldiers during a 2011 cyber warfare exercises. US Army Photo

Clarification: The article below has been clarified to include information on the Defense Department’s effort to bolster base cyber defense and cybersecurity measures within the networks of partner nations in the Middle East and Asia-Pacific region, based on additional comments by Maj. Gen. John Davis

The Pentagon’s cadre of cyberwarriors are working to bolster cyber security measures within civilian and military networks of individual countries, tagged by the Defense Department as being particularly susceptible to cyber attacks.

American and allied military officials were working hand-in-hand to flesh out defensive measures against certain types of malware, overall network defense and various other “tactics, techniques and procedures” to close “technological gaps” within those networks, the Army two-star said during a speech in Arlington, Va.

Davis told USNI News on Monday that U.S. allies in the Middle East and Asia-Pacific region were the primary focus of U.S.-led cyber defense efforts. Partner nations, particularly those in the Pacific, are at risk of cyber attacks from China, Russia and near-peer adversaries.

The White House and Pentagon have repeatedly claimed those nations are responsible for offensive cyber operations against American allies, as well as attempted intrusions into U.S. networks.

Earlier this year, Moscow reportedly hacked into civilian and military networks in Ukraine, as part of a larger military operation by Russia to take Crimea and portions of eastern Ukraine. Russia conducted similar operations in 2008 during the country’s military offensive in neighboring Georgia.

In May, the Department of Justice filed federal charges against five Chinese nationals, stating the individuals were part of Beijing’s ongoing cyber espionage campaign against American networks. It was the first time the U.S. government has taken formal action against China for alleged cyber warfare operations.

Davis did not name Russia or China as the cause for the department’s outreach to allies on cyberwarfare. However, he did note the move fell in line with the overall national security strategy inside the Pentagon to increase partner nation engagements across the board.

“What good is it to send in the cavalry” to help a partner nation defend against a cyber attack, if that country simply does not have the basic skills to operate in the cyber realm, Davis said. “There is only so much we can do on a voluntary basis,” he added, noting partner nations “have to do for yourself first.”

Aside from assisting individual countries in cyberwarfare ops, DOD officials are also working to improve NATO’s ability to respond to attacks against nations within the alliance.

American and NATO military officials have created a slew of cyber working groups, to determine joint approaches and strategies to defend against attacks.Those cyber issues will be teed up by NATO leaders and their U.S. counterparts during the alliance’s upcoming summit in Wales this fall.

Further, alliance leaders have also created a “Cyber Incident Response Center,” according Davis. The center is designed to act as a reporting and coordination hub for NATO allies for cyber operations, in the case of an attack against NATO or its members.