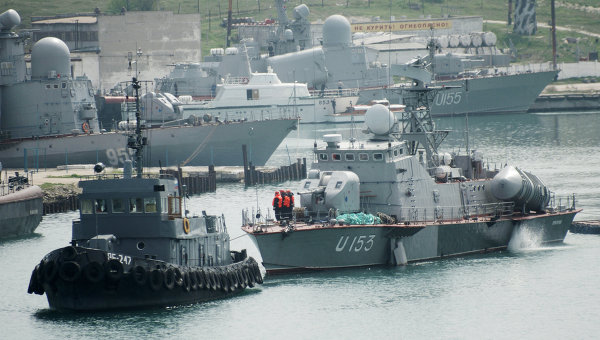 Ukraine has recovered 28 ships from the Russian government following the Russian occupation of Crimea in March, according to information from the Ukrainian Ministry of Defense.

The MoD reported two tugs, a minesweeper and a cutter left Crimea bound for Odessa.

The returned ships are now about half of the ships that were caught up in Russia’s seizure of the peninsula in March.

“As of morning, May 20, 28 combat ships, cutters and vessels of the Ukrainian Navy have been evacuated from Crimea,” according to the Ukrainian MoD.

Since the occupation of Crimea, the Ukrainian Navy has been crippled in its ability to patrol their region relying on five coastal patrol ships and the ageing Hetman Sagaidachny Krivak III-class frigate, USNI News reported from Odessa in April.

A swiftly established dialogue between Ukraine and Russia has facilitated the move of ships from Crimea — the Joint Commission of the Representatives of the Ukrainian and Russian Defense Ministries.

“The return of the warships has been a major boost to the Ukrainian navy as it left more than 50 assorted vessels in Crimea after the Russian intervention,” read a Thursday report in Jane’s Defence Weekly.

Even with the ships in hand, Ukraine still has to struggle to crew the ships and put them into service.
The Ukrainian Navy suffered mass defections after the Russian occupations, including the former head of the navy — Rear Adm. Denys Berezovsky.

The Ukrainian Navy started sea trials this month with the Matka-class missile boat Priluki with a new crew, according to Jane’s.

Filling billets for sailors on the reclaimed ships will be a major challenge for Ukraine, since the center of its naval power was based in Crimea.

A complete transfer of Ukrainian military hardware from Crimea could be completed by June, according to Russian officials.