U.K., Chinese and Russian media report the radar on China’s new destroyer could track and engage the F-35; however it is not clear if such claims have any validity.

Konstantin Sivkov, director of the Russian Academy for Geopolitical Issues, asserted that the destroyer’s active electronically scanned array (AESA) radar system can detect, track and launch weapons against the F-35 at a range of 350 kilometers or about 189 nautical miles, according to a Voice of Russia report.

The Type 052D carries a Type 346 AESA radar and a Type 518 L-band radar paired with the CPMIEC HQ-9B surface-to-air missile defense system. The HQ-9B is thought to have an effective range of about 200 kilometers or roughly 108 nautical miles, according to local press reports.

Doubts are immediately cast upon Sivkov’s claims because of the HQ-9B’s range, but assessment may not be entirely incorrect—particularly if the Type 346 radar is an S-band radar like the Lockheed SPY-1 radar mounted on U.S. Navy Aegis warships. 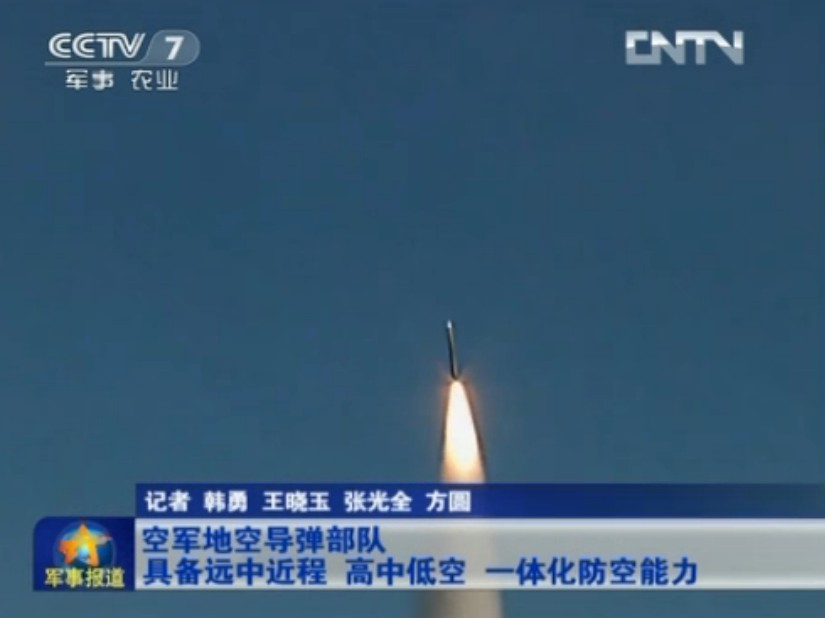 An image from Chinese media of a H9 missile test shot in 2012.

Tactical fighter-sized stealth aircraft are by necessity optimized to defeat higher-frequency bands such the C, X and Ku bands as a simple matter of physics. There is a “step change” in a low observable (LO) aircraft’s signature once the frequency wavelength exceeds a certain threshold and causes a resonant effect.

Typically, that resonance occurs when a feature on an aircraft—such as a tail-fin — is less than eight times the size of a particular frequency wavelength. Effectively, small stealth aircraft that do not have the size or weight allowances for two feet or more of radar absorbent material coatings on every surface are forced to make trades as to which frequency bands they are optimized for.

However, while there is a step change in a stealth fighter’s radar cross-section when it is operating against lower-frequency radars such as the S or L band, there are many factors that are involved in detecting and tracking a low observable aircraft.

Much depends on the range of the aircraft to the radar transmitter and the strength of the omni-directional return from the target aircraft as a result of the resonance effect.

Even with the resonance effect, there may not be a strong enough return to track a stealth aircraft like the F-35 from a tactically significant distance.

The other problem that the defender must contend with is the fact that the L-band and most parts of the S-band have radar resolution cells that are too large to provide a weapons quality track. Effectively, even if a defender can detect and track an attacking stealthy fighter, that defender may not be able to guide a missile onto that target.

That being said, both the SPY-1 and the forthcoming Raytheon Air and Missile Defense Radar (AMDR) operate in higher frequency portions of the S-band and are able to generate weapons quality tracks. If the Chinese system is similar—and there are indications that it is—it could generate fire-control quality guidance for the HQ-9B missiles.

Further according to industry sources, there may be a way to reduce the size of the large radar resolution cells generated by lower-frequency radars—to include UHF and VHF band systems.

The key is networking, industry sources said. If multiple low-frequency radars are connected via high-speed data-networks, it is possible that the resolution cell could be refined to the point where a missile could be guided onto that target.

Currently, it isn’t known if any potential U.S. adversary possesses a similar capability, but it’s a remote possibility.