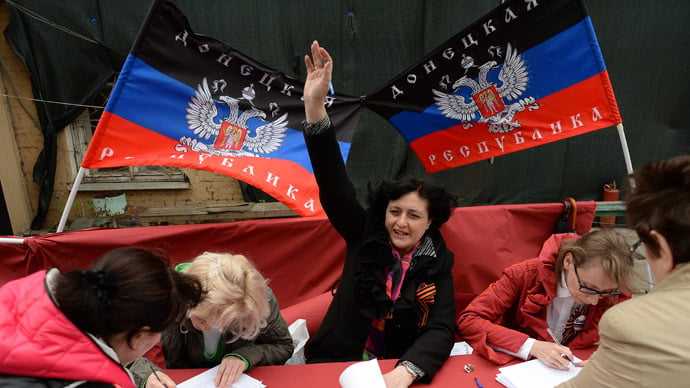 Donbass residents vote in the referendum on the status of the self-proclaimed Donetsk People’s Republic. RIA/Novosti Photo

The referenda held Sunday in Ukrainian regions Donetsk and Luhansk have been denounced by many—but deserve cold, rational consideration. This is the prequel to the upcoming 25 May elections, conducted in a state of civil unrest—near civil war—in eastern Ukraine.

Things will certainly get more tense

One must note with concern that citizens of Kyiv appear to not be the driver of the referendum; rather—in a revenge of history—it’s Russia and Germany that appear to be contesting the political fate of eastern Ukraine.

As if to underscore the point, on Tuesday Sevastopol hosted a celebration of the 231st anniversary of the founding of the Black Sea Fleet. Russia has already budgeted roughly $2.4 billion to strengthen the Black Sea Fleet by 2020—and after cherry-picking the Ukrainian Navy—has returned the most decrepit of the naval vessels to Ukraine, keeping those it wants to add to its southernmost flotilla.

Eternal challenges in realpolitik from Mittleuropa

The words of Woodrow Wilson from his Fourteen Points vis-à-vis Russia are hauntingly insightful, written almost 100 years ago: “The evacuation of all Russian territory and such a settlement of all questions affecting Russia as will secure the best and freest cooperation of the other nations of the world in obtaining for her an unhampered and unembarrassed opportunity for the independent determination of her own political development and national policy . . .”

While many historians say it is the “German Question” that has bedeviled Europe for centuries, one could note that the counterpoint is the “Russian Question.” From what Soviet leader Vladimir Lenin launched more than a century ago, Vladimir Putin is contesting for today.

Part of a plan, or spinning out of control?

But in the referenda of 11 May, while no one would argue that Putin and Russia meddled and had influence, just how much control they had is a different debate—and a crucial one.

As Britain’s Queen Elizabeth I noted, the only problem with starting wars is that one can so rarely predict their outcomes. Now the Russians may have stirred up a pot that creates more challenges than opportunities for them. As noted in Alexey Ilin’s NATO’s Rational Goals in Ukraine, “these regions are already lost” no matter how legitimate, or illegitimate, the procedures and processes may be perceived abroad.

The only real question that remains is whether they are annexed to Russia (under Russian control), or remain as part of a newly constructed, federated Ukraine (under Russian influence, but still part of Ukraine.)

Understandably, the nations that have profited richly from the Westphalian order, codified in the U.N. Charter, are reluctant to see borders changed at the whim of violence-laced referenda and elections; but before we castigate them too heavily, a quick review of voting results in Chicago and Florida, inter alia, over the past 15 years prove that democracy is a messy process at best. If the results were 90 percent for remaining in Ukraine, would the U.K.’s Secretary of State for Foreign and Commonwealth Affairs William Hague have used so many pejorative words on Monday to describe them?

A pivot point in European history

The New Great Game is here, and NATO, the EU, and the “West” have little direct control or influence over Donetsk and Luhansk. Proximity counts, and Russia has it all. Some will ask that if it wants the “Donbas-Volga Rust Belt” and the regional denizens want to be Russians, is that necessarily a bad thing? From the Ukrainian point of view, though, 10 percent of their population lives in Donbas, 20 percent of the GDP is created there, and 25 percent of their exports. Already bankrupt, Ukraine without Donbas may be even more of a fiscally crippled state. Although Russia’s economy is stagnant, sanctions continue to target and squeeze Russia’s oligarchs, and diplomatic pressure and further isolation will frustrate Russia, the Russians will not back down. But Ukraine needs Donbas.

Keep your rudder amidships, but brace for heavy seas

What is needed in our foreign policy toward Ukraine, Russia and Europe as a whole, then, is constancy. First we must again remind ourselves that there are several areas where our interests may converge—or collide—with Russia outside the swath of kresy (borderless plains) that sweep from Volgograd and Kursk to Krasnodar and Crimea. Second, we have to accept those things that we can influence and change—and restrain ourselves from those we simply cannot get to from here. Thirdly, with four nuclear powers in Europe, and American plus Polish, Hungarian, Slovakian, Romanian and the Baltics forces equaling more than a quarter-million troops, there is already a lot of force structure in eastern Europe. We don’t need more military muscle and options; we need more diplomacy and political calculations. Meanwhile, new polling data from the Russian Levada Center indicate that Russians are increasingly comfortable with isolation and a return to confrontation with the “West.”

Ultimately, while Putin and the Kremlin are directly influencing actions and activities in eastern Donetsk, Luhansk, and other cities and regions in the expansive Volga River Basin on the Ukrainian side of the border, those local operatives have, sui generis, started to generate their own activities for their own local interests. As noted by David Patrikarakos, “violence mixes freely with chaos and unreality.” Put differently, Putin certainly has influence, but control already may have slipped his steely grasp.

What may be the best (not perfect) option is an agreement to create a federated Ukraine. Ukraine as a place has long existed—Ukraine as a country is brand new. Dr. Angela Stent, in an interview with the German Marshall Fund, notes this as a compromise. The Germans were “federated” in the aftermath of World War II, and so they feel quite comfortable discussing that kind of option. The historically aware will note with irony that once again, it appears that the German-Russian question may hold the answer to another diplomatic crisis in Europe. Exxon-Mobil, Siemens, and Gazprom, as well as many governments, and ultimately the citizens of Ukraine, may not like this pragmatic proposal, but it may well be the best with which they can live.