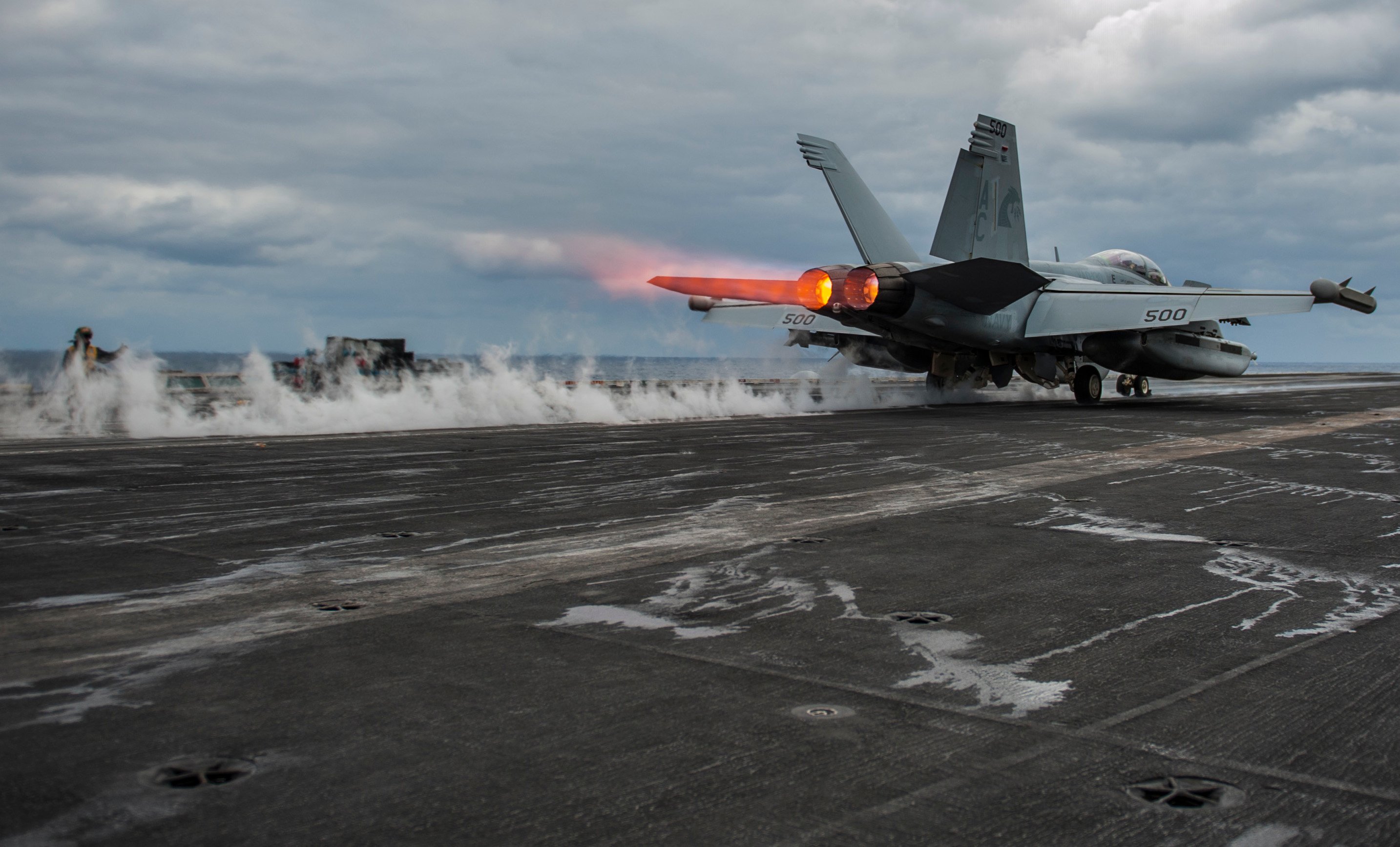 ST. LOUIS — The U.S. Navy formally took delivery of the 100th Boeing EA-18G Growler during an elaborate Monday ceremony in which the company stumped for Congress to buy beyond the Navy’s current program of record of 138 aircraft.

The Navy submitted a request to the Congress to purchase 22 additional jets in its unfunded priorities list earlier this year.

If the company does not secure more orders for the EA-18G in the Fiscal Year (FY) 2015 budget, the production line for the Boeing F/A-18 Super Hornet — from which the Growler is derived — will shutdown in 2016, company officials said.

Boeing needs to build a minimum of two Super Hornets or Growlers per month to keep the production line viable, said Mike Gibbons, Boeing’s vice president for the F/A-18 and EA-18G programs.

The current production rate is about four aircraft per month but will soon go down to three. “A lot of uncertainty for us,” Gibbons said. “Fiscal Year 15, those Growlers are very important.”

If the Super Hornet line can survive fiscal year 2015, Gibbons said he see opportunities to sell between 24 and 60 Super Hornet in the Middle East.

McCaskill, for her part, expressed confidence that the Senate will approve the Navy’s unfunded request.

“I’m optimistic,” she said. “It’s still going to be hard, it will be better if we can figure out how we face this looming sequestration beyond this next budget year.”

McCaskill, who sits on the Senate Armed Services Committee, praised the Super Hornet for being on time and on budget “year after year.”

She also asserted that the Super Hornet offers “85 percent of the capability at a fraction of the cost” compared to the Lockheed Martin F-35 Lightning II Joint Strike Fighter (JSF).

“JSF is the poster child of the worst that has ever occurred in terms of weapons systems acquisitions,” McCaskill said.

McCaskill said her goal is to fund all 22 of the unfunded Growlers in the Navy’s request. She said that the Navy should continue to buy Super Hornets and Growlers into the future.

“If in fact it is a mere fraction of the cost of JSF, why not continue to blend into the future,” McCaskill said.

Clay said that the House Armed Services Committee (HASC) has thus far freed up enough money to fund five extra EA-18Gs, however that would only extend production by another three months or so, he said.

Congressional sources indicated the HASC may reduce funding for the Unmanned Carrier Launched Airborne Surveillance and Strike (UCLASS) aircraft program by a significant margin and applied that funding toward the Growler.

Clay added the there is broad bipartisan support to continue funding the Growler production line. Wagner added that a letter she co-authored with Clay in support of the Growler has gained 80 signatures from across the political spectrum.

Gibbons said that the Navy is working on finalizing the overall requirements for expanded EA-18G squadrons that would have seven or eight aircraft per unit rather than the current five. Those requirements would likely be reflected in Program Objective Memorandum 16, he said.

Boeing estimates that the total future Navy requirement for Growler might total anywhere from 50 to 100 aircraft. However, one industry official said about 70 additional aircraft would likely be enough to equip a force structure of 16 eight-aircraft squadrons.

Meanwhile, the Navy hopes to conduct an operational experiment onboard USS Carl Vinson (CVN-70) with eight Growler onboard during a Joint Task Force Exercise later this month. The Navy exercise is scheduled for a period between May 29 and May 31.