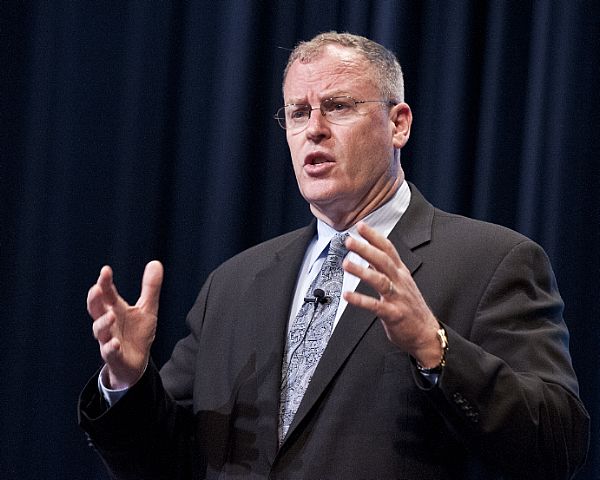 Then-Undersecretary of the Navy Robert Work gives a keynote address during the 2012 Current Strategy Forum at the U.S. Naval War College. US Navy Photo

Bob Work has been confirmed by the U.S. Senate as the new Deputy Secretary of Defense, according to a late Wednesday announcement from the Center for a New American Security (CNAS).

“My year serving as the chief executive officer (CEO) of CNAS has been one of the most rewarding of my professional career,” Work said in a CNAS statement.
“I will miss everyone who is part of the extended CNAS family, and the vibrant spirit of the organization.”

Work’s former colleagues at the Washington, D.C., think tank praised his contributions to the organization.
He served as the CEO of CNAS after stepping down as the undersecretary of the Navy in 2013.

Michèle Flournoy, former under secretary of defense for policy, will take over as the CNAS interim CEO, effective immediately.

“Bob Work has made remarkable contributions to CNAS during his tenure as CEO, and I know that he will do great things in the Pentagon,” Flournoy said in the statement.
“I am honored to be stepping in as interim CEO of CNAS.”