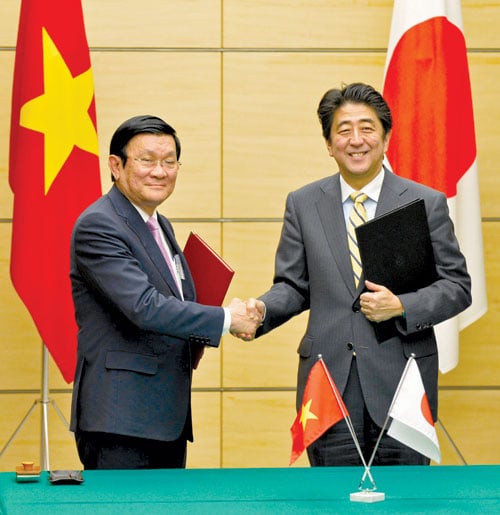 Leaders from Japan and Vietnam have signed an agreement to expand maritime security relations between the two countries against a backdrop of an expansionist China.

The Tuesday agreement establishes an “extensive strategic partnership,” between the two countries and will, “promote cooperation between the respective services of the Vietnam People’s Army and the Japan Self-Defense Forces (JSDF), and advance cooperation in such fields as human resource development, capacity building, and visits of military ships,” according to statements following the signing of the agreement in Tokyo by Japanese Prime Minister Shinzo Abe and Vietnamese President Truong Tan Sang.

“The two sides affirmed that peace and stability at sea were in the common interest of both countries as well as of the international community,” the leaders said in a joint Tuesday statement.
The agreement builds upon a 2011 memorandum of understanding between Vietnam and Japan that created a bilateral security forum and exchanges between the Vietnamese military and the JSDF, according to a Wednesday report in Jane’s Defence Weekly.

The agreement follows more than a year of aggressive actions by China’s People’s Liberation Army Navy (PLAN) into the South China Sea and the ongoing dispute between Japan and China over the Senkaku Island chain.

“The growing strategic ties between Japan and Vietnam also highlight both governments’ intention to restrain China’s increasing assertiveness in its near seas,” read a Wednesday analysis from Jane’s Defence Weekly.

“In recent years Hanoi has sought to contest its ownership of regional offshore territory and has supported these efforts through boosting relations with countries including the United States, India, and Japan. Japan, for its part, is engaged in a prolonged standoff with Chinese maritime forces around the Senkaku islands in the East China Sea.”

The agreement also has an economic component that could lead to closer defense industry ties between Japan and Vietnam. The expanded relationship will also help facilitate the construction of a Vietnamese nuclear power plant with the assistance of Japan.