The Navy is changing the way it counts its ships that will increase the hulls it has on the books by almost ten by including small patrol craft and hospital ships as part of its “battle force,” according to a March 7 congressional notification obtained by USNI News. The letter, signed by Secretary of the Navy Ray Mabus, notified Congress it would add ten 331 ton Cyclone class patrol craft (PC-1), one Pacific-based High Speed Transport (HST) and hospital ships USNS Mercy (T-AH-19) and USNS Comfort (T-AH-20), “to the battle force count dependent on the mission, location and required capabilities.”

The new tally will reduce the number of Avenger-class mine counter measure (MCM-1) ships from a total of 11 to eight as part of the Pentagon’s Forward Deployed Naval Forces in Bahrain and Japan.

Currently the Navy’s battle force is 283 ships, as of Tuesday. Adding the ten Cyclones, HST and two hospital ships and reducing MCMs by three would make the total 293 ships — barring any other additions or subtractions. 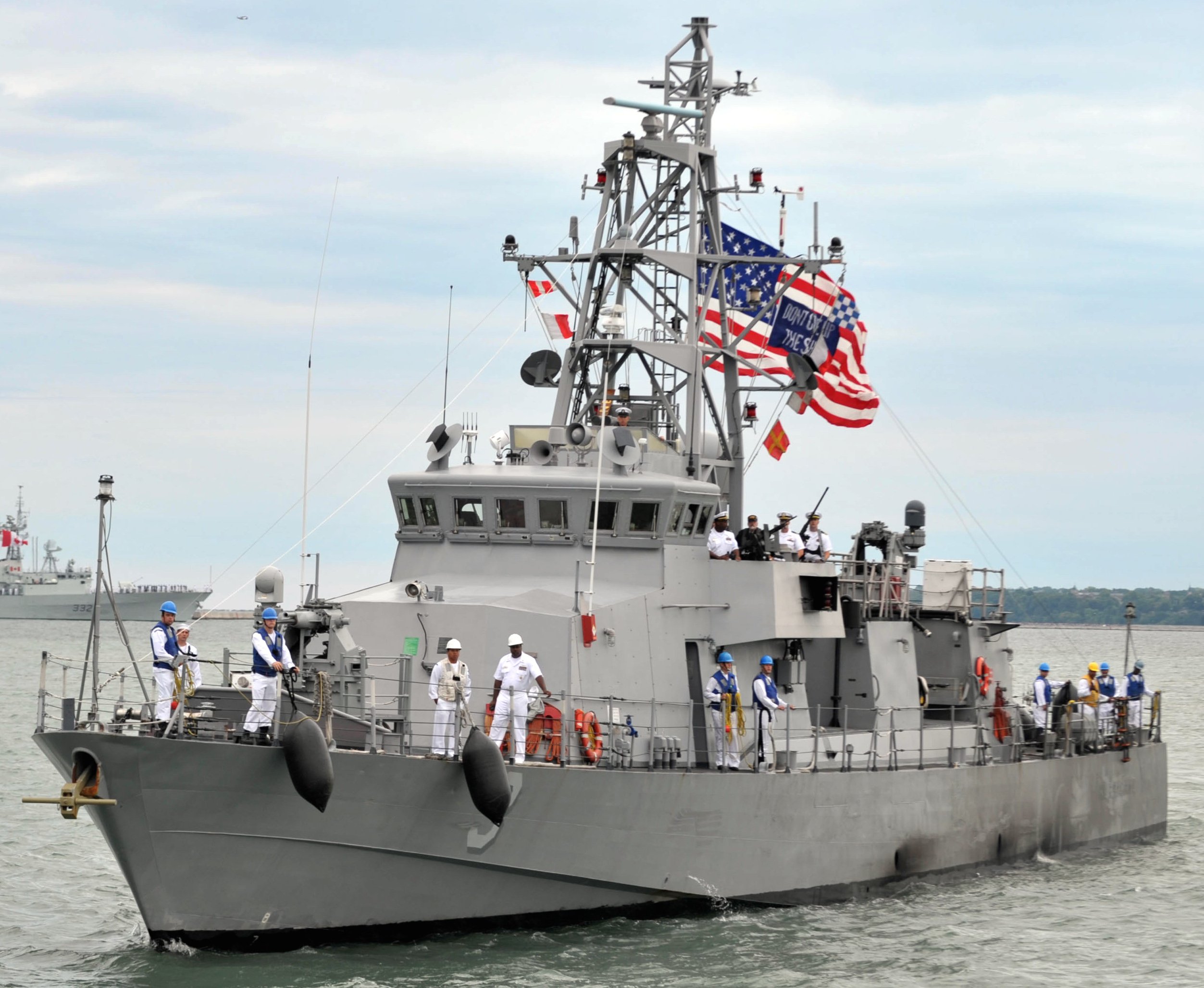 Under the plan outlined by Mabus, the change will do more to include ships frequently requested by the Pentagon’s combatant commanders from the Navy as part of the battle force tally, “on a case-by-case basis with the recommendations of the Chief of Naval Operations and my approval,” wrote Mabus.

“This will be a temporary authorization to include these ships in the ship count and will remain in effect until the ships are no longer requested [by combatant commanders] or are retired.”

When contacted by USNI News, the service provided a statement from Mabus.

“We periodically assess the rules of how we count ships, and these changes better reflect the demands of our combatant commanders and the current mission requirements of our Navy’s battle force,” he said.
“These changes provide us with the flexibility we need to ensure we have the right ships, with the right capabilities, in the right location, to execute what is required of our maritime forces under the Defense Strategic Guidance.”

The new battle force tally will also include 11 Ticonderoga-class (CG-47) guided missile cruisers the service said it wants to keep in a reduced operating status to save on operations and manning costs as part of the Navy’s Fiscal Year 2015 budget proposal.

According to a separate document obtained by USNI News, the 11 cruisers (hull numbers CG-63 to CG-73) will be cycled out of regular deployments starting in FY 2015 and begin a four year cycle of upgrades beginning with USS Gettysburg (CG-64). 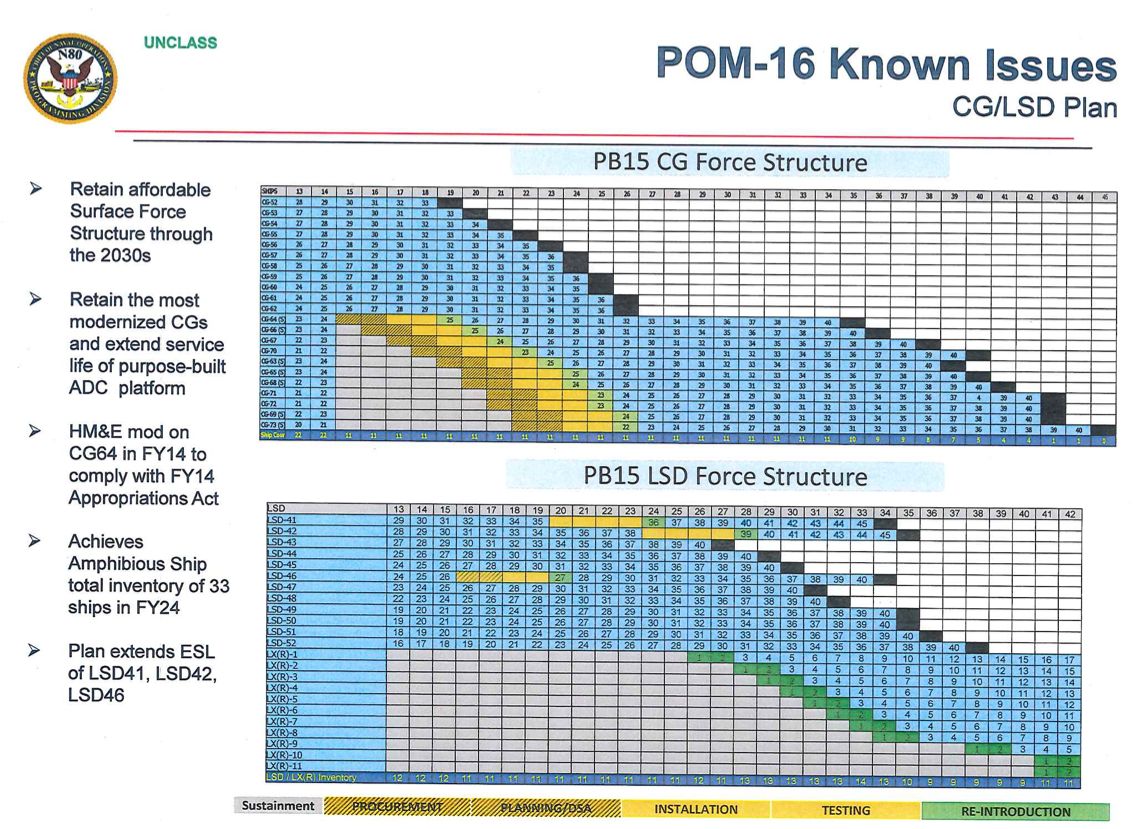 The plan calls for Gettysburg re enter active service in FY 2019 replacing USS Bunker Hill (CG-52), which the Navy anticipates it will decommission the same year.

The move will extend the lives of the class into FY 2045 when the last ship, USS Port Royal (CG-73) will decommission.

One naval expert told USNI News that the shift in counting wasn’t necessarily a move by the service to pad the numbers of Navy ships.

“The Navy can count ships anyway they want as long as they’re being realistic with themselves. We have to look at capabilities on what’s being lost and what’s being retained,” Eric Wertheim, author of Naval Institute’s Guide to Combat Fleets of the World told USNI News on Tuesday.
“Whenever you change the way you count things you’re going to have to ask what’s the purpose and who is the audience?”

Mabus indicated for the next two years the service would provide Congress with the battle force tallies with both the old and new proposed methodologies.

Early reaction from Congress has been negative.

“I am disappointed to see the Navy is now counting ships like Patrol Craft and Hospital Ships in its battle force fleet that only a year ago it chose not to count,” Rep Randy Forbes (R-Va.), chairman of the House Armed Services Seapower and Projection Forces subcommittee, said in a statement provided to USNI News Tuesday evening.
“As well, I do not believe that a ship put in a reduced status should be counted. With America’s national security budget under severe pressure, it is imperative that the Congress and the American people be able to visualize just how radically sequestration is impacting American naval strength.”