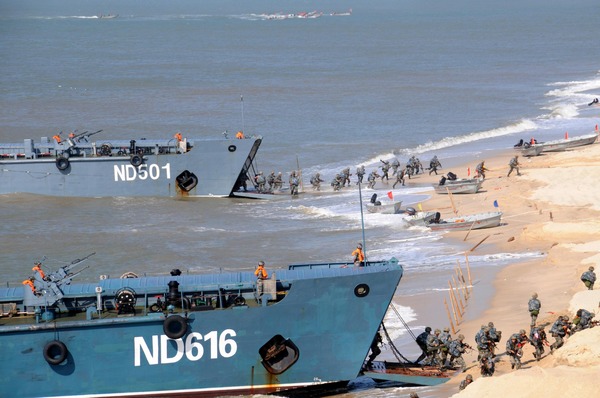 China has long trained for an amphibious invasion of Taiwan during military exercises but has expanded its training to include a similar attack on Japanese holdings in the East China Sea, according the chief of intelligence of the U.S. Pacific Fleet (PACFLEET).

As part of China’s Mission Action 2013 exercise — a massive exercise between the all branches of China’s People’s Liberation Army (PLA) — the military trained for taking the Senkaku Islands, said Capt. James Fanell, deputy chief of staff intelligence and information operations for PACFLEET.

“We witnessed the massive amphibious and cross military region enterprise — Mission Action 2013,” Fanell said at the West 2014 conference on Feb. 13 in San Diego, Calif.
“[We] concluded that the PLA has been given the new task to be able to conduct a short sharp war to destroy Japanese forces in the East China Sea following with what can only be expected a seizure of the Senkakus or even a southern Ryukyu [islands] — as some of their academics say.”

In the last year, China has increased the military activity has additionally increased provocative military actions in the South China Sea around the so-called Nine Dash Line — China’s expansive claim into the region in conflict with several other international claims.

“As a senior U.S. government official recently stated, there is growing concern that China’s pattern of behavior in the South China Sea reflects an incremental effort by China to assert control of the area contained in the so-called 9-dash line despite the objections of its neighbors, and despite the lack of any explanation or apparent basis under international law.” Fanell said.

He then detailed a series of what he called aggressive actions taken by China against its neighbors over the past year. Some of those actions, including combat drills in the south Philippine Sea were described as China’s “protection of maritime rights.”

“By the way, protection of maritime rights is a Chinese euphemism for coerce seizure of coastal rights of China’s neighbors,” Fanell said.

“The next week (the week after the combat drill in the south Philippine Sea) in the East China Sea, Japan said that a Chinese warship locked its fire-controlled radar onto a Japanese warship. China denied it for a month, but then admitted that it occurred, but said that it was not in danger since the range between the two ships was too close for a weapons system,” he said.
“Seriously, you just can’t make this stuff up.” 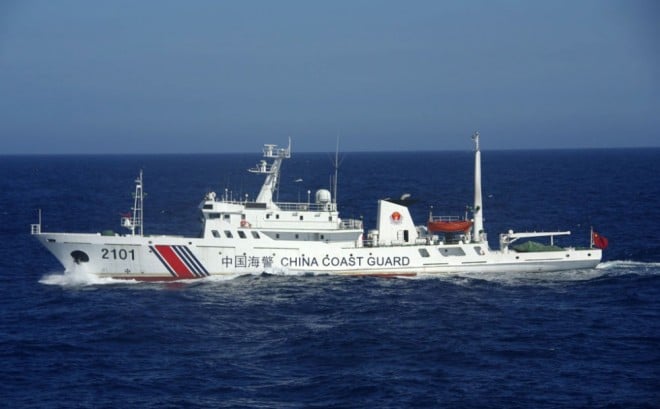 “Tensions in the South and East China Seas have deteriorated with the Chinese Coast Guard playing the role of antagonist, harassing China’s neighbors while PLA Navy ships, their protectors, (make) port calls throughout the region promising friendship and cooperation.”

Fanell noted the nation has allocated $1.6 million on improvements to disputed South China Sea outposts. Developing ports, air fields, water purification and surveillance systems. “Meanwhile, China describes efforts by other nations to improve the navigability of their outposts as egregious provocations and responded with threats.”

Fanell’s assessment of the Chinese lies seemingly in contrast to American efforts to forge close military-to-military ties with the country.

On the same panel the Navy’s head of operations, plans and strategy, Rear Adm. James Foggo described a successful meeting between U.S. Navy officials and the head of the PLAN, Adm. Wu Shengli. The U.S. delegation toured PLAN ships and submarines. However, shortly after they left, the Chinese declared the controversial Air Defense Identification Zone (ADIZ) over a large swath over the East China Sea in November.

The U.S. is also continuing to work out plans for the Chinese navy to participate in the Rim of the Pacific 2014 (RIMPAC) exercise later this year.