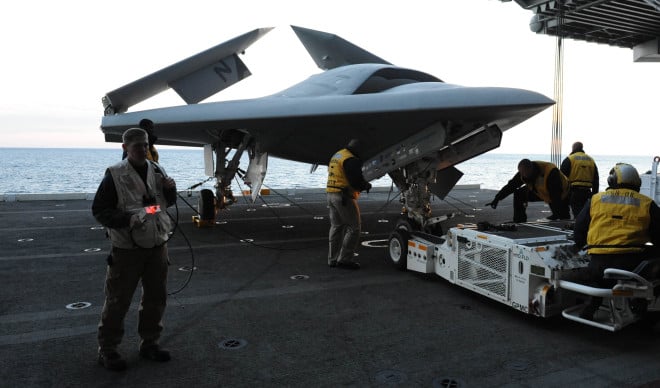 Could the U.S. Navy’s future Unmanned Carrier-Launched Airborne Surveillance and Strike (UCLASS) aircraft have an air-to-air role? The service’s director of air warfare Rear Adm. Mike Manazir posed that it could during a Dec. 20 interview with USNI News.

Manazir contemplated the possibility that that the UCLASS, which is primarily being designed for the intelligence, surveillance and reconnaissance (ISR) and strike roles, could be used as a flying missile magazine which could supplement the firepower of the F/A-18E/F and F-35C Joint Strike Fighter in air-to-air combat as a robotic wingman of sorts.

“Maybe we put a whole bunch of AMRAAMs (Advanced Medium-Range Air-to-Air Missile) on it and that thing is the truck,” Manazir said. “So this unmanned truck goes downtown with—as far as it can go—with a decision-maker.”

In Manazir’s vision the UCLASS could be commanded remotely from a Northrop Grumman E-2D Hawkeye or a Lockheed Martin F-35C Joint Strike Fighter flight leader.

“This is not beyond the state-of-the-art,” Pietrucha said.
“The difficulty is always that the aircraft it self has no judgment and no prioritization scheme and isn’t going to have the systems onboard to do all things that a fighter does.”

The solution, Pietrucha said, is to leverage the sensors, situational awareness and inherent human judgment of a fighter pilot in a manned command aircraft. The manned aircraft would detect, track and identify the target, then hand-off the target for the unmanned aircraft to engage the “bandit”—as hostile targets are known.

“The Navy is ahead of the Air Force on this,” Pietrucha said, specifically citing the Naval Integrated Fire Control-Counter Air (NIFC-CA) concept where a common air picture would be shared across multiple air platforms via a network of data-links.

Under the NIFC-CA concept, any “shooter” can fire on a target that is being tracked by a “sensor”, so long as the target is within range.

“If you solve that problem, then your missile caddy UCAV [unmanned combat air vehicle] wingman is a going concern,” Pietrucha said. “You can now target his missiles for him.”

But using an unmanned aircraft such as the UCLASS in an air-to-air role will have some disadvantages too. Air superiority fighters, particularly the Lockheed Martin F-22 Raptor and Boeing F-15C Eagle, use a combination of high altitudes and high supersonic speeds to impart the maximum possible launch energy to the AMRAAM to engage targets at extended ranges.

The UCLASS, however, is expected to be subsonic aircraft. As such, it will not be able to impart as much launch energy to the AMRAAM as a Boeing F/A-18 Hornet would—which itself flies at lower speeds and altitudes compared to a genuine air superiority platform like the Eagle.

“The disadvantage of your UCAV wingman is that he’s probably not going to go supersonic and shoot a missile at high altitude to get a longer range,” Pietrucha said.

But the disadvantage is not “insurmountable” however. The majority of real world AMRAAM shots have been taken at subsonic speeds at medium altitudes, Pietrucha said. Further, under certain circumstances, a subsonic unmanned aircraft could have a kinematic advantage.

For example, the manned fighter was in a defensive position at a 90 degrees angle to the target aircraft; the manned aircraft does not have many missile launch opportunities.

“Under situations where I could theoretically get a missile off, it’s going to waste a lot of it energy making 90 degrees of turn, but my UCAV can point directly at the target,” Pietrucha said.

“In that case, his kinematics are better because his missile does not have to solve the turn problem.” Effectively, an unmanned wingman would abrogate the need for a fighter to keep its nose pointed at the enemy so long as a sensor is tracking the enemy target.

But a very complex stealthy unmanned aircraft is also expensive, Pietrucha said, which necessarily means that they are not expendable to policymakers.

Using an unmanned aircraft for air-to-air combat would necessarily mean that the platform is vulnerable to return fire. But moreover, a human pilot might also intentionally sacrifice those robotic aircraft to prevent his own fighter from being shot down. “My life cannot be replaced,” Pietrucha said. “It’s not an abstract consideration in the cockpit and I’ll expend unmanned airplanes left, right and center in a way I wouldn’t even consider using my own wingman because the threat is too high.”

Pietrucha said that in the longer term he does not believe that the Pentagon would develop a supersonic unmanned fighter that could flight alongside a manned counterpart.

The reason, he said, is that cost—particularly for the-propulsion system–would rise dramatically while delivering capability inferior to a manned aircraft. A supersonic UCAV would need an expensive high-thrust engine and an area-ruled aircraft and a sizeable amount of fuel capacity—and as such the cost would be comparable to a manned platform.

“The question is are you actually saving any money or are you building a very expensive platform that is so less capable than a manned platform that it’s not worth it?” Pietrucha said.