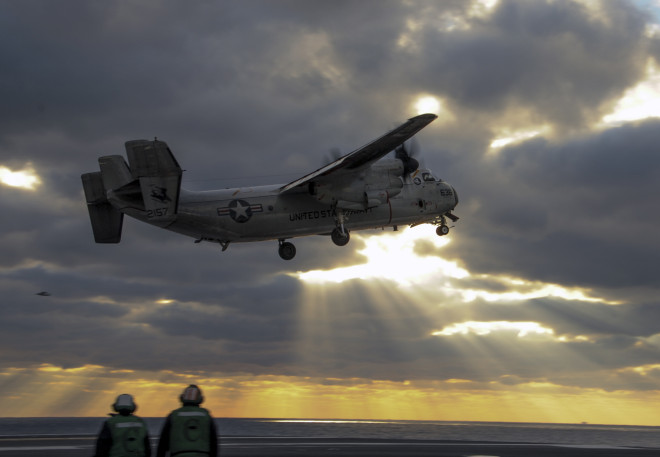 The Navy is “about a year away” from selecting a replacement for the service’s supply aircraft for the carrier fleet, the head of the Navy’s air forces said during a panel discussion at West 2014 in San Diego Calif. on Wednesday.

The C-2A Greyhound design has been the carrier onboard delivery (COD) aircraft for the Navy’s carriers since the late 1960s and the current serving C-2s were bought in the 1980s.

“We’re still culling through all the data and very much in the [analysis of alternatives] process,” Vice Adm. David Buss, commander Naval Air Forces, said.

The decision will be between an upgraded version of the C-2 built by Northrop Grumman and the V-22 tilt-rotor Osprey in use by the U.S. Marine Corps, Buss said.

The advantage for the C-2 is its compatibility with the services E-2 fleet that Navy uses for aerial awareness. Likewise, the V-22 would be compatible with the Marine’s Ospreys — an aircraft that has already been underway with Navy ships.

The Navy has undertaken studies of the suitability of the V-22 for operations to resupply the carrier.

“There are some options in front of us,” Buss said.
“We’re a year or so away from making a decision.”

One challenge the new COD aircraft would face is transporting the F-135 engine for the F-35C Joint Strike Fighter (JSF) to and from the carrier — a problem Buss said the Navy was currently studying.

“The high power module in the F-135 is a beast,” Buss said.
“We’re working through a range of options technical and engineering challenges in how we move that module.”