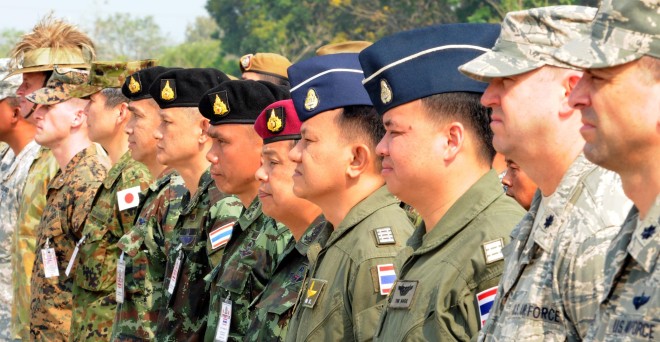 That was the theme of a West 2014 panel discussion with retired Gen. John R. Allen and retired Adm. James Stavridis on what the U.S. involvement in Afghanistan teaches us about the future.

In the end, unilateral action is not a successful strategy for the United States,” Stavridis said, pointing out that 50 countries, including 28 members of NATO, took part in the Afghan war. “This diplomatic and military coalition was central to the work in Afghanistan.”

A key coalition partner, Stavridis said, were the Afghans themselves.

Gen. Allen agreed. “American military power might be applied unilaterally, but in the end, it is effectively applied through coalitions.”

While the future of the country remains somewhat in doubt, both pointed out the successes already secured. Before the U.S. launched its war in the wake of the Sept. 11, 2001, terrorist attacks, some 500,000 children – all boys – were enrolled in Afghan schools.

Today, an estimated 9 million children – 40 percent of whom are girls – study in Afghan schools, Stavridis said. Further, when the Taliban was ruling the country, just 10 percent of the population had access to health care. Today, that number is closer to 65 percent. And when the Taliban controlled the impoverished nation, virtually no one owned a cell phone. Today, there are 19 million cell phones in the country. And developments there are covered by a free press.

“I am cautiously optimistic optimistic,” Allen said. “There have been a lot of huge accomplishments that have occurred, though the question is will they be sustained?”

A key, the general said, is an American security force that can remain in the country after the last combat troops return home later this year. Allen said about 10,000 American advisors would be needed, with about half as many advisors and troops from coalition partners.

He also reminded the audience “we need to keep our expectations measured.” Afghanistan was the fourth poorest country on Earth when the war began, and it remains among the poorest in the world today. Corruption will remain a challenge. As will tribal rivalries.

“This is a long-term human project to work our way out of,” Allen said.

Stavridis was optimistic, saying the same sort of questions persisted in Colombia 10 years ago and in the Balkans five years before that.

“I see a better than even chance of coming ahead in Afghanistan,” Stavridis said. “But the fact that we are handing off power democratically I think is… remarkable.”

And Allen noted that the challenges posed by tribalism and ethnic tensions “does not preclude a system of governance that will work for Afghanistan.”