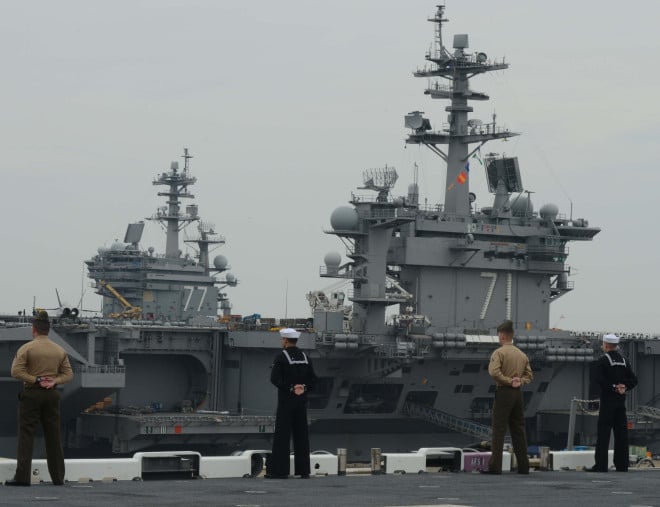 The aircraft carrier, nuclear-powered for the last 50 years, and its embarked air wing remain arguably the most valuable and effective instrument for shaping the national military strategy, with proven applicability from humanitarian assistance and disaster relief to high-end maritime strike warfare.

Budget decisions should preserve military capability such that when the president calls “911,” he can count on available and immediate military response — namely the integrated power of the carrier and air wing. During a budget downturn, the value proposition should motivate national leaders to ask, “How can we not afford to build carriers?”

When the nation’s defense budget shrinks, as it does cyclically, aircraft carriers are targeted due to their cost. However, when one considers their weapon-system capability, long service life, extensive combat power — they are exceptionally cost-effective, responsive and relevant in any operational scenario in any theater.

The need for more carriers becomes evident with increased regional conflicts and a more dispersed threat of escalation. Today, if events somewhere outside typical carrier deployment areas were to escalate, the Navy would have to “surge” a carrier from its homeport, which could take weeks or months; or remove a deployed carrier from its current region and mission.

The nation was the beneficiary of serendipity not once, but twice in 2013. When the president was seeking military options in response to a growing Syrian problem, USS Nimitz (CVN-68) was at the chop line between the 5th and 7th Fleet areas of responsibility in the Indian Ocean, readily available for re-tasking.

Later in the year, when a ravaging typhoon struck the Philippines, USS George Washington (CVN-73) was on station in a matter of hours to provide much needed relief to a humanitarian disaster of enormous proportions.

Serendipity won’t always be on our side. We have the opportunity to preserve the force and assure our ability to respond.

The service life of a nuclear-powered carrier is 50 years — unequaled by any other ship class — providing a significant return on the taxpayers’ investment, ensuring consistent forward presence in areas of conflict.

Gerald R. Ford (CVN-78), the first new class of nuclear-powered aircraft carriers in more than 40 years, was delivered at a cost only about 18 percent more than the last Nimitz-class carrier and provides a 70 percent increase in maximum sortie-generation capability over the Nimitz class.

She has a completely redesigned flight deck that uses a ”pit stop”-like concept to recover, rearm and refuel high-end aircraft capable of high sortie rates, and a more efficient and powerful nuclear-propulsion system, greatly reducing the requirement for steam, hydraulic, and pneumatic piping systems. Ford will have a multifunction radar suite that will detect and engage the most advanced threats, and revolutionary launch and recovery systems that contribute to more efficient flight operations while reducing total operating costs and stress on the aircraft.

Improvements to the Ford-class over Nimitz will reduce crew size by between 500 and 900 sailors and reduce the 50-year total ownership costs by more than $4 billion. Finally, technology insertion into the Ford class design will increase ship operational availability by 25 percent, due to reduced maintenance requirements, thereby allowing the CVN force to meet the nation’s needs while maintaining flexibility for unforeseen events.

No other country has replicated the American carrier strike group, featuring a 100,000-ton nuclear-powered aircraft carrier capable of operating up to 75 advanced aircraft. The carrier’s aircraft are nodes for data-sharing, operating netted sensors, and linking weapon systems to generate effects far downrange. The nuclear power plant provides the ship unmatched responsiveness, unconstrained by the need to refuel. The attendant asymmetric advantage is clear and unmistakable.

China has developed the Liaoning-class aircraft carrier, taking short cuts in technology development to avoid the century of modernization and learning that the U.S. Navy experienced to field the Nimitz and Ford classes and carrier-suitable aircraft. Conversely, cutting-edge U.S. technology was used to launch and recover an unmanned, fighter-sized aircraft from the carrier George H.W. Bush, a first in aviation history. This serves as a critical demonstration of the relevancy of the carrier in the future asymmetric fight.

A version of this post was based on an article in Proceedings and originally ran in the San Diego Union-Tribune.