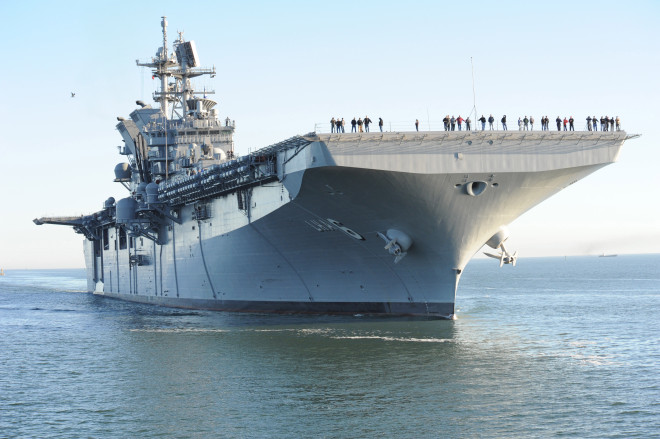 The first in a new class of amphibious warship has completed its acceptance trials, Naval Sea Systems Command (NAVSEA) announced this week. The future USS America (LHA-6) conducted three days of trials in the Gulf of Mexico departing from Ingalls Shipbuilding in Pascagoula, Miss. in late January, NAVSEA said.

The trials conducted over two hundred tests on the ship’s systems including the ship’s propulsion systems, which are based on the propulsion plant of the USS Makin Island (LHD-8) with uses a gas turbine hybrid drive instead of an older steam plant design.

“The ship performed extremely well,” said Capt. Chris Mercer, Amphibious Warfare program manager for the Program Executive Office, Ships for NAVSEA said in a statement. “There were no major deficiencies identified. This marks a tremendous achievement for any ship, made only more impressive by America’s size, complexity and that the ship is the lead ship for the amphibious assault replacement program.”

The $3 billion America is the first in a class of amphibious warship with an emphasis on U.S. Marine Corps aviation assets like the MV-22 tilt-rotor Osprey and the short takeoff-vertical landing (STOVL) F-35B Lighting II Joint Strike Fighter (JSF).

The 44,850-ton ship — and follow on Tripoli (LHA-7) — are the first amphibious warships built in recent memory with out a well deck — to the protest of the Marines Corps. The Navy has asked Ingalls to design LHA-8 with a well deck to allow the ship to take on and offload amphibious landing craft.

The successful acceptance trials will follow with an anticipated commissioning in the second quarter of this year. America will be based at Naval Station San Diego, Calif.