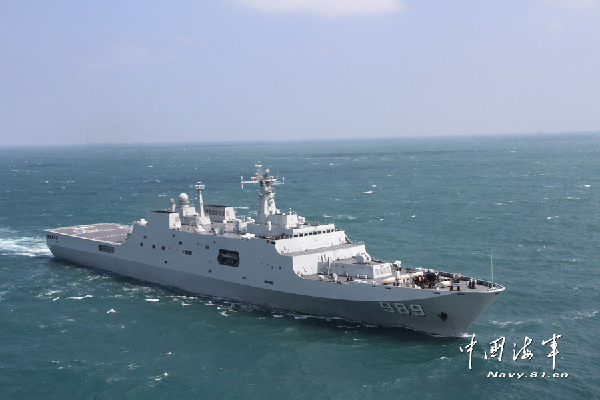 An undated Chinese amphibious warship Changbaishan. Chinese state media claimed the ship was part a three ship flotilla that patrolled off the shore of Malaysia. Chinese Ministry of Defense Photo

Malaysian military officials are disputing a claim made in Chinese state media that three People’s Liberation Army Navy (PLAN) ships conducted a Jan. 26 patrol around James Shoal — 58 miles off the coast of the island nation, according to a Tuesday report in Jane’s Defence Weekly.

Citing unnamed military sources, Jane’s reported there were, “no visual or radar sightings of the Chinese ships during that period,” and that “it was it was physically impossible for the PLAN ships, which had been in the Paracel Islands carrying out military exercises, to have sailed to James Shoal that quickly and undetected.”

On Sunday, the state-run Xinhua news service claimed a three-ship PLAN naval force that amphibious warship Changbaishan and Luyang-class destroyers Wuhan and Haikou had patrolled “the Zengmu Reef” — China’s name for the shoal.

According to the Xinhua report, “soldiers and officers aboard swore an oath of determination to safeguard the country’s sovereignty and maritime interests.”

Head of the Royal Malaysian Navy (RMN) — Abdul Aziz Jaafar — told Malaysian press that the flotilla had not come near the shoal.

“There has been no act of provocation on the part of the Chinese or threat to our sovereignty as they are conducting their exercise in international waters,” Jaafar said on Wednesday.
A PLAN patrol in March near the shoal prompted the Malaysian government to ask the flotilla to leave.

The Malaysian military has developed a working relationship China within the last year. Both the military and civilian heads of Malaysian forces paid visits to China in 2013 and both militaries have committed to a disaster relief exercise in April.

“Given Malaysia’s desire to avoid a confrontation, the risk of it initiating an incident is low, although it is unclear whether the PLAN would adopt the same restraint if it came across an RMN vessel,” read a Jane’s analysis.

Malaysia is one of several countries in the South China Sea region that have overlapping claims with China over territory in the area.

The report from Xinhua is the second in as many weeks from state controlled media that has caused confusion on China’s military intentions.

Last week a report in local Chinese press claimed the country was intent on building a four aircraft carrier force but then quickly deleted the reports.