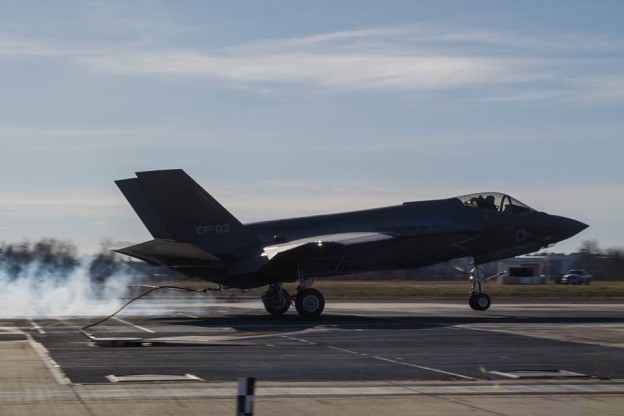 “From 9 to 16 Jan, the F-35 team accomplished 36 successful roll-in arrestment tests at Lakehurst with the redesigned F-35C arresting hook system on CF-3,” wrote Joe DellaVedova, a spokesman for the F-35 Joint Program Office in a Tuesday email to USNI News. “All flight test objectives were met.”

Even before CF-3 deployed to Lakehurst for testing, the F-35C’s redesigned tail-hook showed early signs of promise. “Prior to the Lakehurst deployment, CF-3 also performed 3 lower-energy roll-ins and 1 fly-in arrestment at Patuxent River [Maryland] to reduce risk by confirming system and instrumentation functional operation,” DellaVedova wrote.

Aircraft CF-3, which is the third carrier variant test article, is the first F-35C to be fitted with the redesigned tail-hook. The tail-hook has been a vexing problem on the F-35C variant when it was discovered in 2012 that the original hook could not reliably engage an arresting wire.

Lockheed and the Joint Strike Fighter program office ultimately traced the problem back to the shape of the hook. The solution was to reshape the hook point and adjust the system’s hold-down damper, which helps prevent the hook from bouncing around upon touchdown.

With the Lakehurst deployment completed, aircraft CF-3 will spend the next several months proving that it is suitable for operations at sea onboard a carrier.

“The aircraft has ferried back to Patuxent River, where it will now commence 3-4 month series of field-based ship suitability tests, including fly-in arrestments that are scheduled to begin soon,” DellaVedova said.
“These tests are expected to lead to a certification of the F-35C for shipboard flight trials, which are planned to commence in Oct. 2014.”

The F-35C was originally expected to conduct sea trials on USS Nimitz (CVN-68), however it unclear if that is still the case.