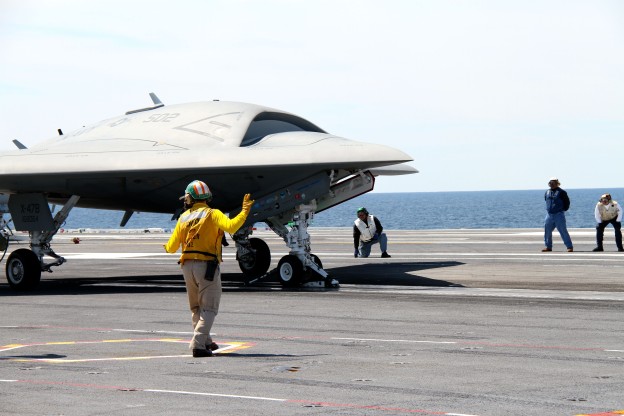 The Northrop Grumman X-47B preparing to launch off of USS George H.W. Bush (CVN-77) on May, 2013. US Naval Institute Photo

“The UCLASS draft RfP is scheduled for release by the end of this quarter,” wrote Naval Air Systems Command (NAVAIR) spokeswoman Jamie Cosgrove in a Tuesday statement to USNI News.
“The program team is exercising due diligence and great discipline in the formulation of the draft RFP and planned evaluation criteria to ensure the government’s objectives are best met. They are still on track to release a final air segment RFP for the technology development phase in third quarter FY [fiscal year] 14 and contract award in early FY15.”

According to sources familiar with the program, the Navy is revisiting the issue of performance requirements versus cost, which is likely to lead to yet another revision to the UCLASS’ specifications and draft RfP evaluation criteria.

The Secretary of the Navy and the Chief of Naval Operations (CNO) offices have asked Naval Air Systems Command and the Under Secretary of Research, Development and Acquisition to submit a report on the ability of industry to create an aircraft within the cost parameters the Pentagon set with in the last year. The Navy’s key performance parameters (KPPs) require competitors in the UCLASS competition to conduct a 600 nautical mile orbit for $150 million for the cost of the system.

Navy leadership is scheduled to be briefed on findings this week, several sources told USNI News.

The Navy—as was revealed to USNI News on Dec. 20 during an interview with the service’s director of air warfare, Rear Adm. Mike Manazir — wants the UCLASS to be a highly capable intelligence, surveillance and reconnaissance (ISR) and strike platform. The service also wants the UCLASS to have the ability to act as an aerial refueling tanker and have significant growth capacity—all of which will require a larger aircraft. Manazir had said the stealthy unmanned aircraft could weigh as much as 80,000lbs.

“Unfortunately, their current budget probably is not sufficient to get it regardless of how survivable it is,” one industry source told USNI News on Tuesday.
“So, the Navy will either have to make some hard choices [relative to the requirements] to stay within budget, or find additional funding in an already budget-constrained environment. It’s as simple as that.”

Further complicating matters are the requirements set forth by the U.S. Congress in the fiscal year 2013 and 2014 National Defense Authorization Acts (NDAA). The 2013 NDAA prohibits the Navy from down selecting to a single contractor until a preliminary design review is complete.

Meanwhile, the 2014 NDAA adds the mandate that the service may not acquire more than six UCLASS air vehicles prior to gaining Milestone B approval to enter into a formal Engineering and Manufacturing Development (EMD) phase. The Navy’s original plan was to build about four air wings worth of UCLASS aircraft in the program’s Technology Development phase.
“All of this presents a dilemma for the Navy,” the industry source said.

Still, the service seems committed to a high-end capability for UCLASS.

“It will be a warfighting machine,” wrote Secretary of the Navy Ray Mabus in an editorial posted on the War on the Rocks blog on Tuesday.
“The end state is an autonomous aircraft capable of precision strike in a contested environment, and it is expected to grow and expand its missions so that it is capable of extended range intelligence, surveillance and reconnaissance, electronic warfare, tanking, and maritime domain awareness.”

At least some within industry believe that the Navy should consider taking a “time-out” to re-plan the program.

The Navy is still wrestling with the problem.

“We are finalizing the requirements that will lead to a design for the UCLASS,” wrote Mabus.
“We aren’t building them yet. We want to ensure we get the requirements and design set right before we start production in order to avoid the mistakes and cost overruns which have plagued some past programs.”