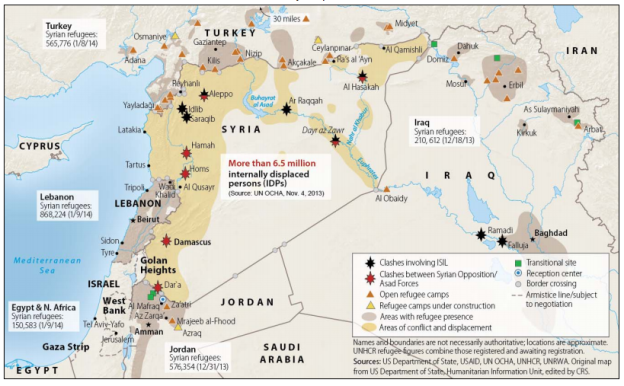 A map of the Syrian conflict and the displaced refugees. US State Department Graphic

The following is from the Jan. 14, 2014 Congressional Research Service report: Armed Conflict in Syria: Overview and U.S. Response.

Fighting continues across Syria, pitting government forces and their foreign allies against a range of anti-government insurgents, some of whom also are fighting amongst themselves. Since March 2011, the conflict has driven more than 2.3 million Syrians into neighboring countries as refugees (out of a total population of more than 22 million).

Millions more Syrians are internally displaced and in need of humanitarian assistance, of which the United States remains the largest bilateral provider, with more than $1.3 billion in funding identified to date. U.S. assistance to opposition forces was placed on hold in December 2013, as fighting in northern Syria disrupted mechanisms put in place to monitor and secure U.S. supplies. The war is exacerbating local sectarian and political conflicts within Lebanon and Iraq, where escalating violence may threaten stability.

Neither pro-Asad forces nor their opponents appear capable of consolidating their battlefield gains in Syria or achieving outright victory there in the short term. Improved coordination among some anti-government forces and attrition in government ranks make a swift reassertion of state control over all of Syria unlikely. Conflict between the Al Qaeda-affiliated Islamic State of Iraq and the Levant (ISIL, a.k.a. ISIS) and other anti-Asad forces has intensified.