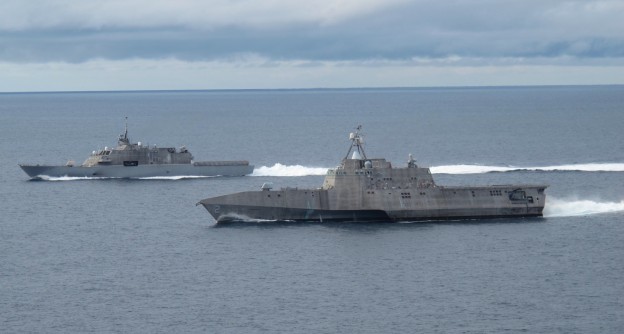 Navy projections for its proposed Littoral Combat Ship (LCS) buy remains on solid footing heading into the Fiscal Year 2015 budget process, despite recent reports of pending reductions to the program.

“We have a valid requirement for 52 ships, and the program is performing strongly,” Navy acquisition chief Sean Stackley told reporters on Thursday.

Testing and development on the high-profile warship remains on schedule, with senior Navy leaders expected to put the next four LCS ships on contract within the next few months, according to the Navy.

“So the Navy’s position on the LCS program is that it is solid,” Stackley said during a media briefing at the Surface Navy Association’s 2014 symposium in Crystal City, Va.

That said, the Navy acquisition chief declined to comment on, “any press reports to the contrary.”

Stackley’s comments come a day after a report in Defense News stated the the White House’s Office of Management and Budget ordered Navy leaders to slash the proposed LCS buy from 52 ships down to 32.

Acting deputy secretary of defense Christine Fox issued the order in a Jan. 6 memo, directing the Navy to implement the cuts in its upcoming FY 2015 budget proposal.

For his part, Stackley declined on Thursday to comment on the memo or the service’s FY ’15 plans

Pentagon press secretary Read Adm. John Kirby reiterated Stackley’s comment noting the Pentagon-wide FY 2015 proposal “is not complete [but] its is near complete.”

In September a version of the ALT POM contained a cut to a mere 24 hulls, ending the program at the Navy’s current commitment to each variant of the ship.