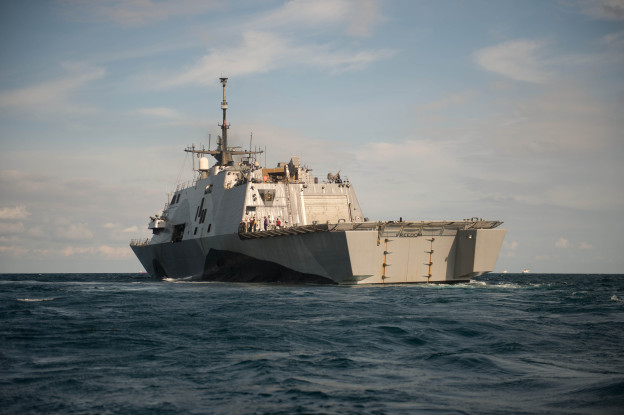 U.S. intelligence officials have made informal inquiries to the Navy on whether the Littoral Combat Ship (LCS) could be part of future intel operations across the globe.

NAVSEA has previously said most of the informal LCS walkthroughs have been on the Freedom-class (LCS-1) hulls.

“There are all kinds of things we can do,” in terms of mission capabilities for both military and intelligence missions, Brintzinghoffer said after a briefing at the Surface Navy Association 2014 symposium in Crystal City, Va.

Military leaders in Quantico and in at Special Operations Command in Tampa, Fla. have repeatedly expressed interest in the multi-mission capability the LCS could provide special operations teams and Marine units.

However, efforts by the intelligence community to leverage the ship for future operations is a relatively new development for the LCS program.

Brinzinghoffer declined to comment on which specific intel agencies have reached out to the program office, but noted the agencies who have inquired about the LCS cut across military and civilian organizations.

He also could not provide specifics on what intelligence capabilities or operations could be carried out aboard the LCS, but noted potential missions could run the gamut from collections to analysis in hot spots worldwide.

“It is picking up steam,” within the sea service, Copeman said during a reporter’s roundtable. But the three-star Admiral reiterated the Navy’s focus is to get the three initial mission module packages up and running first.

On the military side, both Marines and U.S. special operations forces are eying new mission module packages, specifically tailored to their expeditionary operations, aboard the LCS.