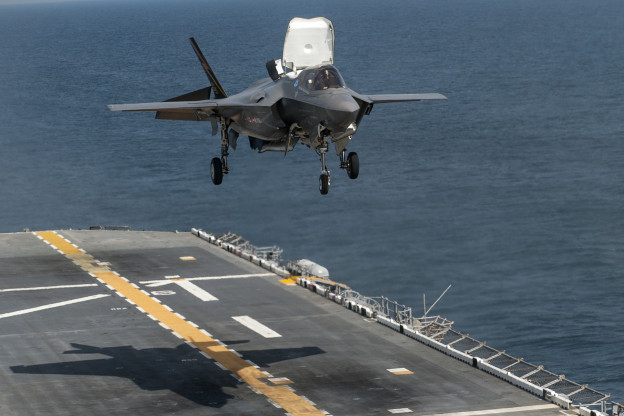 The Navy is continuing to wrestle with landing deck issues aboard its amphibious ships, tied to flight operations with the F-35B Lightning II Joint Strike Fighter (JSF) and MV-22 Osprey.

Naval Sea Systems Command have drafted a plan to cope with the problem, using a combination of limited operations and deck modifications to allow the JSF and Osprey to fly off the service’s large deck amphibious warships.

Along with those modifications, Navy leaders are also limiting the number of flight operations being conducted off of America, as part of deck preservation plan, Mercer said during a briefing at the Surface Navy Association’s annual symposium in Crystal City, Va.

But Mercer did note the strategy in place for the America will not be necessary for the next two of the LHAs in the class.

USS Tripoli (LHA-7) and the yet-unnamed LHA-8, “will be able to carry out “complete unrestricted operations” with the F-35 and MV-22, Mercer said.

The B variant of the F-35 is a short take-off and vertical landing (STOVL) aircraft that produces much more heat when it lands and takes off than the current AV-8B Harrier fighters currently flown off of big decks. Likewise, the exhaust heat from the nacelles of the Osprey has damaged flight decks in the past.

Both warships will be able to handle the deck heat issues, based on the lessons learned from the strategy in place aboard the America, Mercer said.

Deck damage issues related to jet engine downwash from the Osprey and F-35 have long plagued the Navy’s efforts to get those aircraft aboard the amphib fleet.

That said, Navy leaders “fully understand . . . the stresses and failures that the flight deck can accept,” Mercer said.

But when pressed as to why service officials have yet to come up with an answer for the deck heat issue, he said program officials were still struggling with finding a “cost-effective solution” to the problem.

However, Mercer was adamant the operational restrictions aboard America would not affect the combat effectiveness of the ship, given its mission.

The caps “are not going to be a problem” since the primary mission for the Navy’s amphibs was quick assault operations, not sustained warfare missions carried out by the service’s aircraft carriers,” Mercer said.

Since the LHA is not designed to support a sustained air campaign, the deck modifications and operational caps will not affect deck reliability aboard the America“as long as we spread [combat sorties] out,” he said.