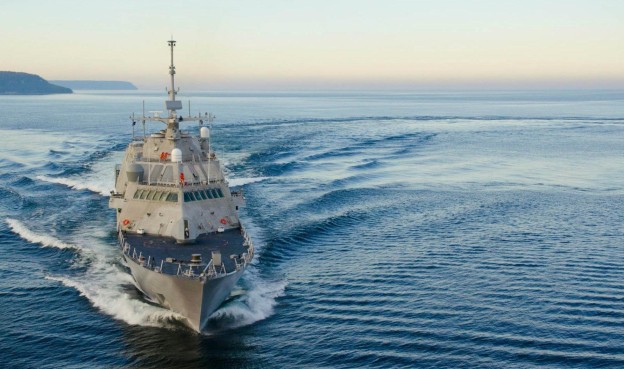 “With each one of these ships produced, we continue to increase our efficiency,” Joe North, Lockheed’s vice-president for the LCS program told a group of reporters on Monday ahead of the Surface Navy Association’s 2014 symposium.
“Reducing not only production costs as a goal, but we’re trying to reduce sustainment costs at the same time.”

Compared to recently returned USS Freedom (LCS-1), Fort Worth has increased fuel-efficiency, speed and payloads thanks to extended water-jet tunnels.

The improved water-jets will be carried forward on the follow-on vessels of the class, North said. Fort Worth also has an improved launch handling and recovery system and new satellite communications system with increased bandwidth.

Additionally, the ship has a next-generation visual landing aid system for its embarked helicopters, North said.

Fort Worth also has an airborne mission zone added on the starboard-side of the vessel’s hangar. The change allows the Navy to remove containers full of spare helicopter parts and saves over 20 tons of weight. It also allows room for a second helicopter.

Lockheed and the Navy are also working improved corrosion control for the LCS and structural improvements to the ships that will be fitted on all vessels starting on Fort Worth.

Milwaukee (LCS-5) — which will be the third Freedom-class ship — will add an electrical starter for the ship’s gas turbine engines, North said.

The new starter reduces both cost and weight, he added. Further, Milwaukee has improved axial-flow water-jets that reduce cavitation and further improve speed. “That was an ONR [Office of Naval Research] project,” North said. “It came out in time for Milwaukee, it’s on [LCS-5] and following.”

Milwaukee will also have a smaller side door that will be similar in size to a cargo door on an amphibious assault ship. The change came as a result of operational feedback from the fleet, North said.
Milwaukee, which was launched on Dec. 18, is expected to cost about $360 million and will be delivered to the Navy in 2015.

Once Milwaukee becomes operational, feedback from the operational crews will be fed back into the production line. But the Navy and Lockheed will not break production to incorporate changes, so modifications will be added to later hulls that not currently being built. Starting with the hull number Nine, the ships will be produced using improved manufacturing techniques.