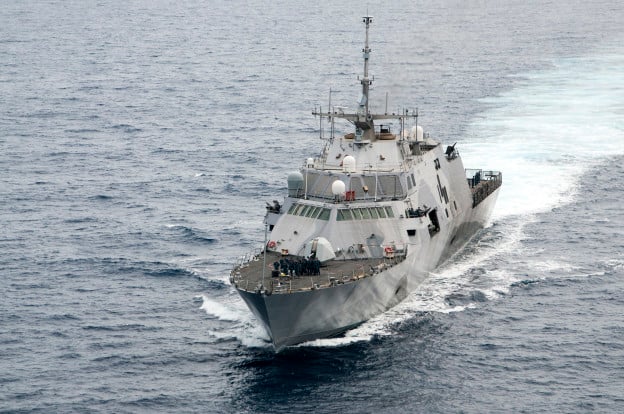 “They won’t be writing a book about it 30 years from now,”Copeman said.
It was: “presence; it’s showing the flag; common operational picture; flight ops, 11 meter [boat operations].”

Copeman did not go into details of the missions but revelation of the operations changes perception of the deployment — which was billed as consisting of mostly training missions and international cooperation exercises.

Overall Copeman billed the ten-month deployment to Singapore as a success, despite several high profile systems problems during the first time deployment.

“I don’t agree the deployment was characterized by a series of breakdowns,” Copeman said.
“This is a research and development platform we took a pretty significant risk with”

In July, Freedom lost propulsion due to a problem with two of the ship’s four Isotta Fraschini V1708 diesel electrical generators that overheated and shutdown that required the ship to return to port.

Its first significant underway in May from was cut short due to lube oil problems that caused the ship to return to port.

In October, the crew found three feet of water in the ship’s bilge due to a broken seawater pipe.

“While the ship was deployed for ten months, it was available for 70 percent of the time for the operational commander, which is on par with most other ship in the fleet for forward deployed,” Copeman said.

The Navy and Lockheed Martin have already made design changes in follow on ships of the Freedom-class to improve the diesel generators and the cooling systems.

“Between LCS-1 and LCS-5 [Milwaukee] there’s been a redesign of the ship’s service diesel generators, redesign of the main reduction gear coolers which proved problematic,” Copeman said.

Copeman also said the addition of ten sailors to both versions of LCS core crew of 40 would be a permanent addition to the ship’s compliment.

“Fatigue has been a problem on the ship in the past and [the additional crew] worked out pretty well for us,” Copeman said.

The next LCS deployment is scheduled later in 2014 with the second Freedom- class ship— USS Fort Worth (LCS-3).

“It’s going to be 16 months. There’s going to be significantly more crew turnover than during Freedom’s deployment,” Copeman said.

During Freedom’s deployment, the crew was swapped at the halfway point as a test of the LCS manning scheme that would assign two ships a rotation of three crews for forward deployed ships.

The other LCS ship class, Independence (LCS-2), won’t be ready for deployment until after it completes testing and evaluating the mine countermeasure (MCM) for both classes of ships sometime in 2015.