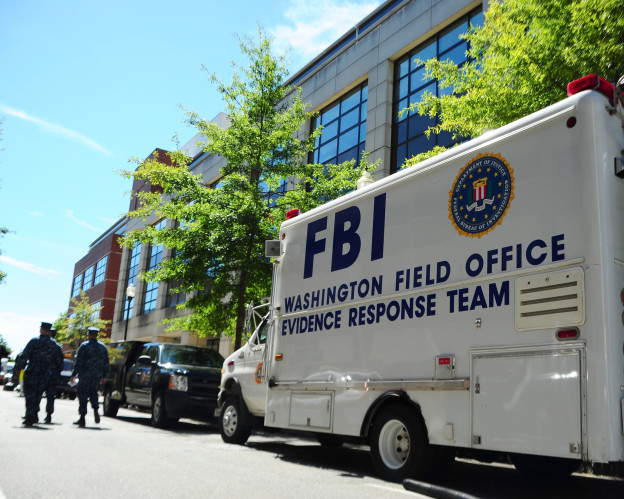 FBI collects evidence at Building 197 on board the Washington Navy Yard. US Navy Photo

The Secretary of the Navy Ray Mabus has decided to renovate and restore the site of the Sept. 16 Washington, D.C. Navy Yard shooting, according to a Monday statement from the service provided to USNI News.

“The proposal will change the building’s interior and exterior, which will create a new sense of space for returning employees,” read a statement.

In September, the Navy issued a $6.5 million contract to CH2M Hill Constructors, Inc. to give the Navy options on how to renovate building after the shooting where 13 people — including shooter Aaron Alexis — died.

The final contract is due to be awarded by the end of January and the renovation should be completed by 2015.

According to the statement, the following renovations will be part of the reconstruction:

– The northeast employee entrance will be refreshed.
– A new visitors’ entrance will be constructed on the southern end of the historical building.
– The two historical atriums will be enclosed with glass as approved by the DC Historical Preservation Officer.
– Renovation of existing cafeteria.
– Construction of an appropriate Remembrance Area inside the building.
– New paint and carpeting.
– New Furniture.

“They assumed there was a second shooter until they could prove otherwise and they blew open every door if it didn’t have a window, if it had a window they broke the window. They cleared every single room,” Hilarides said. “The building is in pretty bad shape.”

NAVSEA staff could expect to work for up to a year in the former U.S. Coast Guard Headquarters at Buzzard Point in Southeast Washington, D.C. until the renovations are complete.