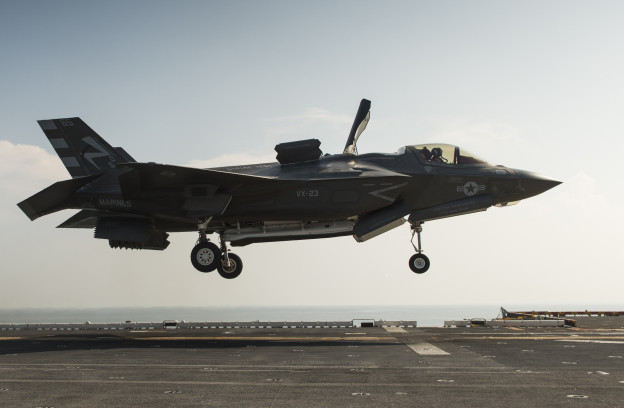 While the U.S. Air Force is catching flack from Congress based on the assumption it will retire its fleet of the Fairchild Republic A-10 Warthog ground attack aircraft due to budgetary pressures for F-35 Joint Strike Fighters (JSF), the U.S. Marine Corps is thrilled to be receiving Lockheed Martin F-35Bs to perform that same close air support (CAS) mission.

Though some critics deride the JSF’s ability to perform the CAS role, the Marines consider the F-35B to be critical for the service’s continued ability to provide aerial fire support for its ground forces in the post-2020 era, USMC officials say.

Stealth will be essential to survive against the types of threats the service expects to face by that time—conventional aircraft just will not cut it.

“You still may have to fight your way in and out just to get in and out of your CAS site,” a senior USMC official told USNI News. “We need the stealthy aspects of this aircraft for all missions.”

The service currently uses its fixed-wing strike fighters like the Boeing AV-8B Harrier jump jets and Boeing F/A-18 Hornets as flying artillery for Marines on the ground.

But as those airframes will be replaced by the short take-off/vertical landing F-35B starting in late 2015 when the stealthy new fighter becomes operational with the USMC.

Part of the reason stealth is so important is because in the future, U.S. forces might have local air superiority—but not uncontested air supremacy over the entire theatre of operations.

“We may have air superiority–but not supremacy–and maybe not in every piece of the AOR [area of responsibility],” the senior USMC official said.
“Especially since in the PACOM [Pacific Command] AOR, the potential for multiple JOA’s [Joint Operations Area] for multiple conflicts simultaneously could be realistic.”

If conflicts do breakout in the Pacific theatre—or anywhere else for that matter—and the USMC ground forces are ordered to intervene, those troops will be need to be supported by airpower. “

Our lifeblood is full and total integration of the combined arms team,” said retired Lt. Gen. George Trautman, a former USMC deputy commandant for aviation. “So we have a single commander. Unity of command is important to us.”

That unified force comes in the form of a Marine Air Ground Task Force (MAGTF), which combines the logistics, ground and air combat elements.

As such, airpower is integrated into the ground combat element’s scheme of maneuver right from the outset of planning and the execution—which allows Marine Air to be particularly effective in the CAS role.

“While you have to have a good airplane to do it, our ability to conduct the mission so effectively is driven by our investment in that as a critical mission set across the board,” one combat experienced Marine Corps aviator told USNI News.
“All the aircraft that show up on station understand that they are there to provide fire support or some other non-kinetic support for the guys on the ground, and I think the Marine Corps understands that exclusively and without question.”

Though CAS is one of the primary missions for Marine Air, the service needs multirole aircraft because the USMC uses airpower in various ways to shape the battle-space.

“We need multirole airplanes because we use our airplanes in various roles,” Trautman said.

“Sometimes we’ll use our aviation combat element to shape the deep fight for the Marine Expeditionary Force, for example.”

But the Marine air combat element can also be used independently of the ground force for a multitude of missions, Trautman said.

The addition of the F-35B to the Marine Corps arsenal will allow the service air combat element to “exponentially” increase its performance in all of its mission areas.

“People who remain wedded to legacy airplanes really don’t know what they’re talking about,” Trautman said.
“The key here is two fold. It’s the low observable capability, but really that capability is in my mind less of a value added proposition than the fact that the F-35 is a flying sensor.”

The USMC’s eventual goal is to be able transfer the reams of sensor data gathered by the F-35’s avionics suite and provide that information to other aircraft like the Bell-Boeing MV-22 Osprey, Bell AH-1Z Cobra or the tactical air command center and—eventually–even down to individual fire teams. “The dissemination of that information is not going to occur overnight,” Trautman said. It will take time to implement, “but it’s coming.”

The increased situational awareness generated by the F-35 should also help to reduce fratricide incidents during the CAS mission.

“It’s going to make our ability to operate safely in a close air support mode much better than it has been in the past,” Trautman said.

The USMC aviator, who has served several tours as a forward air controller agreed that situational awareness was the single most important factor for the CAS mission.