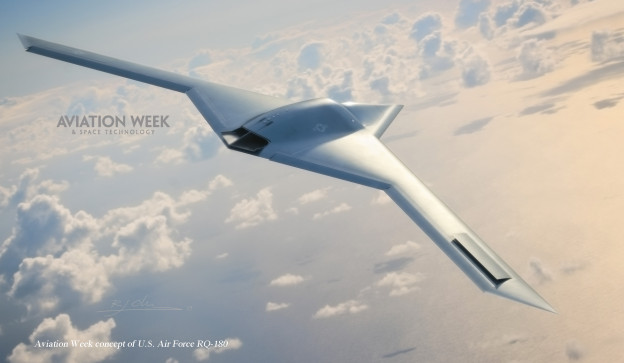 Industry trade journal Aviation Week suggests that a new extremely stealthy long-range strategic unmanned intelligence surveillance reconnaissance (ISR) aircraft — the Northrop Grumman RQ-180 — not only exists but that it could be operational by 2015.

However, there have been rumblings that some sort of stealthy new ISR aircraft had been in development at Air Force’s classified flight test facility at Groom Lake, Nevada, since at least 2010. But the details of exactly what the program entails has always been murky—save for the fact that it had been described by some as a “stealthy Global Hawk” equivalent.

The mystery aircraft had been described as a flying-wing design about the size of a Northrop Grumman RQ-4B Global Hawk, but with long spindly wings designed for extreme efficiency at high altitudes. In was also known that the aircraft was designed to have “wide-band” stealth that could operate against high and low frequency radars.

One source described the aircraft design as something that was “hiding in plain-sight”—however, the account could not be independently corroborated.

The Aviation Week story does seem to bear that out — citing defense officials speaking anonymously. But if the RQ-180 does exist, why would these Pentagon officials let the cat out of the bag?

The answer could be the budget — program leaks are typically designed to accomplish a specific task. In this case, the goal might be to secure funding for the new RQ-180 while convincing the US Congress to let go of the Northrop Grumman RQ-4B Global Hawk program.

The Air Force has been trying to convince a skeptical Congress to allow the service to finally divest itself of most of its Global Hawk fleet. The RQ-4 can only be used over permissive airspace and has no ability to penetrate contested airspace, which is becoming a problem as the U.S. shifts its gaze from the wars of the Middle East to the Pacific theatre.

Moreover, a senior service official all but admitted that a classified aircraft existed earlier in the year.

“We did not do that without carefully considering how we’d cover that mission with the U-2 and other classified platforms,” Lt. Gen. Charles Davis, military deputy for the office of the assistant secretary of the air force for acquisitions had told the House Armed Services Committee in April.

“There are systems out there that can do this in a variety of different ways,” he added.

The RQ-180 is likely part of the Pentagon’s Long Range Strike (LRS) family of systems.

Early Air Forces briefings described the “family” as including not only a bomber, but also a cruise missile, conventional prompt global strike missiles, and also electronic attack and ISR platforms.

The RQ-180 might the platform that fills the electronic attack and ISR missions as part of this “family of systems”. But only time will tell if this Groom Lake Monster is real or just another mirage like the alleged hypersonic Aurora of old.