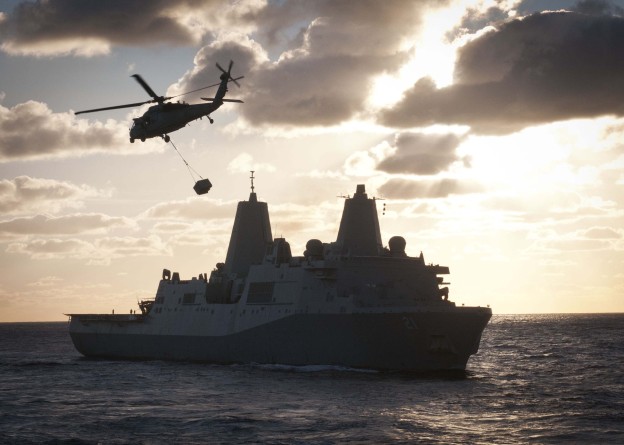 The 25,000 ton warship is part of the Navy’s plan to spread ships out along the East Coast. The strategy would allow the Navy options if Norfolk was knocked out of operation.

“I’m thinking 30 bad minutes, from weather, from manmade accidents, from terrorism … and we’ve got half the navy’s carrier fleet, all of its east coast repair and construction, bottled up for who knows how long,” then U.S. Fleet Forces Command head retired Adm. John Harvey said in a 2010 report in Jane’s Defence Weekly.
New York will be joined by big deck amphibious ship USS Iwo Jima (LHD-7) and landing dock ship USS Fort McHenry (LSD-43) in 2014.

The three will be part of the Iwo Jima amphibious ready group (ARG). New York and Iwo Jima returned from a deployment in December 2012.

The move of the ARG follows a years-long campaign by the Navy to move a Nimitz-class carrier to Mayport from Norfolk.

The move was put on hold indefinitely due to political pressure.