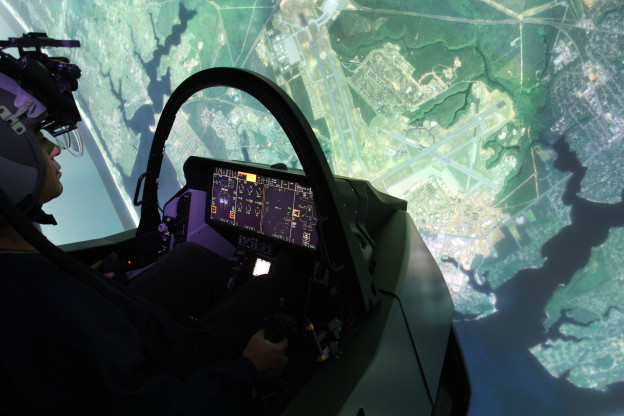 The U.S. Marine Corps’ VMFAT-501, which is currently based at Eglin Air Force Base, Fla., will transfer to the base in the second quarter of 2014 along with its stealthy new F-35Bs.

In preparation for the move, two of the FMS devices will be up and running at MCAS Beaufort by the end of the year, Mike Luntz, Lockheed’s director for the F-35 training system, told USNI News in an interview.

Right now, pilots are testing the software loads on the two FMS simulators to make sure they work to the required specifications.

“We’ve got a test load of software in there and we’ve had pilots actually flying the test load to make sure our installation is solid,” Luntz said. “Then we will be installing the Block 2A software into the full mission simulator.”

Block 2A is the latest hardware and software configuration for the F-35 aircraft. It includes better air-to-air and air-to-surface modes and initial Multi-Function Advanced Data Link (MADL) capability and some simulated weapons.

The Block 2A software in the FMS is a re-hosted version of the same code that is on the actual F-35, Luntz said. In addition to the operational flight program for the jet, the FMS is installed with the same computer models that govern the functionality of real F-35 hardware.

For example, the aircraft’s Pratt & Whitney F135 afterburning turbofan uses a virtual model of a perfect engine to benchmark its performance—that same virtual model would be used in the simulator.

As the F-35 matures and further configuration blocks are completed, the FMS will be upgraded with the latest software. Luntz said that the current plan calls for the FMS to be upgraded with the Block 2B software prior to the USMC’s planned F-35B initial operational capability date in mid-2015.

“Our plan is to have that Block 2B full mission simulator software completed at the end of 2014, first quarter of 2015, so that we can support the training for the Marine Corps starting in April of 2015,” Luntz said.

Lockheed expects that the FMS is realistic enough that actual flying sorties in a real aircraft could be cut by 50 percent, he said.

“Now if you’re a pilot not responsible for the budget sometimes maybe that’s not such a good thing,” he said. “The pilots like to get as much stick time as they can in the actual aircraft.”

Feedback from the pilots who have flown the FMS is that they sometimes forget they are in a simulator. “We often get feedback that the pilots forget they weren’t actually in the aircraft,” Luntz said.

But a number of highly experienced fighter pilots—including those who have flown the F-35–consulted by USNI News said that while simulators are good for certain training tasks, there is no substitute for real flying.

Simulators are unable to provide the physiological cues found during an actual flight—and perhaps more importantly, are unable to replicate the very real fear of death. But moreover, simulators are missing some of the unforeseen friction of daily flight operations—events which can only be described as random unexpected occurrences which can throw a pilot off his game plan.

Nonetheless, given the budget realities and the fact that networked simulators can provide a much more realistic threat environment than can ever be replicated even in a large force exercise, the use of such training tools is likely to continue expanding with the Defense Department.

“Higher threat density, actual weapon flyouts and fireballs, manned red air, and global terrain databases mean that I can create tactical scenarios in the sim which are not possible in live-fly,” one pilot said.

However, the F-35 FMS is not currently connected with other aircraft simulators, but it has all the necessarily hooks built-in to be compatible with the Distributed Mission Operations network, Luntz said.

In the meantime, the software load in the simulators installed at the joint F-35 facility at Eglin AFB will be upgraded so that training can start with the jet’s upgraded Block 2A configuration on Dec. 2 of this year.

“We’ve got our courseware loaded and installed and ready to go for that at Eglin,” Luntz said. “The software for the full mission simulator will follow that very shortly.”