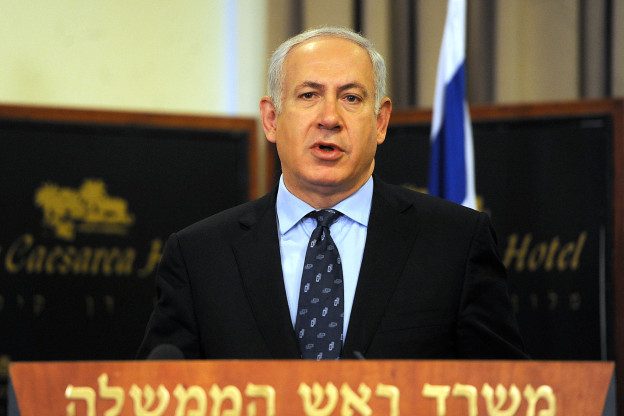 In advance of the third round of six-party talks with Iran in Geneva this week, Israeli Prime Minister Benjamin Netanyahu is spending a great deal of time flooding the information sphere with dire warnings that the United States and five other nations are ready to give Iran what he calls the “deal of the century.” Netanyahu contends that “the sanctions are just beginning to work” and the proposed interim agreement with Iran does not go far enough in ensuring that Iran does not have the ability to build a nuclear weapon.

Logically, Netanyahu’s position begs a couple of questions. First, if the sanctions are just starting to work, then what does the international community achieve by tightening them or leaving them in place longer? After all, the coercive goal of sanctions is to leverage the concerned parties to sit down at the negotiating table, and that is exactly what is happening. By all appearances Iran has been taking steps in the right direction, so why should that be discouraged? Second, if diplomacy and on-site inspections can’t be trusted, is there a better option?

Netanyahu’s position for dealing with Iran has always centered on the threat of airstrikes against select targets in Iran. Thus, it appears that the differences between the U.S. and Israeli positions set the stage for a comparison between what diplomacy/inspections can achieve and what a military option might achieve. There is much food for thought in such a comparison.

What can diplomacy and inspections achieve? At the conclusion of each of the historical cases in the Strategy and War course at the Naval War College, students are often asked, “Who were the winners in this conflict and who were the losers?” The responses are often surprising. For example, after the study of the 9/11 wars in Afghanistan and Iraq, students often list the U.N. weapons inspectors in Iraq among the “winners.” That conclusion is reached after an objective consideration of the second Iraq war and the post-invasion confirmation that the decade of U.N. weapons inspections in Iraq had successfully dismantled Iraq’s weapons of mass destruction (WMDs). Students of this chapter of history are able to compare the results of the U.N. inspectors with the now-certain knowledge that the 1981 Israeli air strike on Iraq’s Osirak nuclear research facility did very little damage to Iraq’s nuclear program and nothing to deter it.

What can military strikes achieve? The 1981 Osirak strike created a myth in the minds of many Israeli and American leaders that the nuclear ambitions of nations can be squelched with a few well-placed bombs. History teaches us otherwise. An airstrike can never have the same assured and measured results that on-site inspectors enjoy. Yet the myth of the military option persists despite mounting evidence that bombs and missiles do not have the ability to destroy or deter a nation’s nuclear ambitions with any degree of certainty. The results that weapons inspectors on the ground can have was demonstrated in post-Desert Storm Iraq up to the U.S. invasion in 2003. It is also being demonstrated today in Syria, where recent reports indicate that more than 1,300 tons of deadly Sarin and other chemical weapons are bagged, tagged, and prepared for incineration.

The good news for the nation of Israel, and all of humanity, is that the 1,300-plus tons of deadly weapons in Syria are being taken out of Bashar al-Assad’s hands, and are also no longer at risk of falling into any wrong hands. We can always suspect that Assad is hiding something, but one thing is certain—the massive stores of dangerous WMDs already identified in Syria are being taken out of action. Airstrikes could not have achieved this measurable result in Syria with any comparable level of assurance. That could only be done with boots on the ground, and the inspector boots in Syria did not come with the incalculable cost and risks of military invasion. Diplomacy worked and thus far, in terms of WMD removal, the effort in Syria is looking like a success.

The same positive results of the weapons inspectors in Iraq, and now in Syria, could also be achieved in limiting Iran’s suspected nuclear ambitions. As trite as it may sound, we won’t know until we try. What we do know for certain is the military options for Iran present many risks and potentially a very limited ability to achieve the objective of keeping Iran out of the nuclear weapons club. If history is our guide, diplomacy and on-site inspections are the best way to achieve the objective with any degree of assurance. Inspectors are proving that in Syria today and hopefully will be achieving similar results in Iran in the coming months.

Even Hawks such as Netanyahu sometimes must accept the fact that the hammer is not the only tool for every job. History shows us that the type of inspections and verification measures being proposed at the six-party talks in Geneva are the best option for creating a nuclear weapons free Iran. This may really turn out to be the “deal of the century” for all concerned.