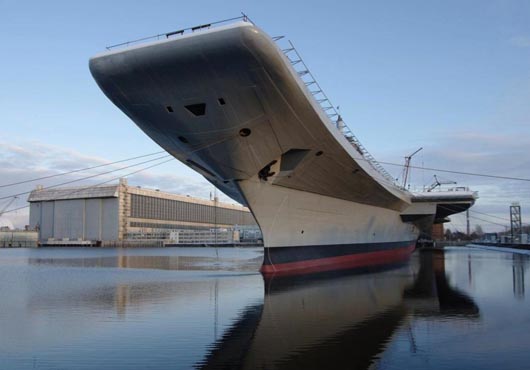 The Indian Navy has commissioned its Russian-built aircraft carrier in a Saturday ceremony at the Sevmash Shipyard, according to several press reports.

The long-delayed INS Vikramaditya will serve as a centerpiece of India’s naval power — joining the 50 year-old carrier INS Viraat and — eventually — an indigenous Indian-built carrier scheduled to enter the fleet in 2017.

The completion of Vikramaditya brings to an end an almost decade long saga of refitting the Kiev-class aircraft carrier — originally planned to deliver in 2008. The final cost for the ship is an estimated $2.33 billion with another $2 billion for 45 MiG-29K tactical fighters to round out the ship’s airwing — an increase in cost of about $1.75 billion, according to a report in Agence France-Presse.

The ship will now depart Russia near the end of the month and is sltaed to arrive in India by January.

Vikramaditya was formerly Admiral Gorshkov and sailed with the Russian Navy from 1987 to 1995 before the Indian Navy cut a deal to refit and rearm the carrier with the Russians.

The 45,000-ton ship can field 34 aircraft, including 21 MiGs and a variety of helicopter assets.

The carrier was designed to field not only aircraft but a formidable array of offensive weaponry, unlike American carriers which rely on their accompanying battle group for their defenses.