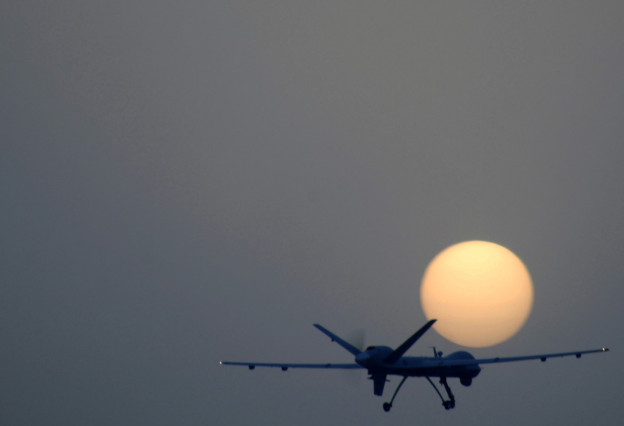 An MQ-9 Reaper remotely piloted aircraft takes off from Joint Base Balad, Iraq in 2007. US Air Force Photo

The U.S. Air Force is set to release its “Remotely Piloted Aircraft Vector” for its future unmanned aircraft fleet as next week.

“That document is completing a final administrative review in preparation for SECAF/CSAF [secretary of the Air Force/chief of staff of the Air Force] signature and public release,” a senior USAF official told USNI News.
“Hopefully should be in the next week or so.”

The Vector intends to broadly outline the kinds of unmanned aircraft fleet the USAF wants to operate and how the service will utilize its fleet over the long-term.

The document will provide industry clues to what technologies the service would need in the future and inform companies as to their research and development efforts.

The need to gather intelligence, surveillance and reconnaissance (ISR) data from inside highly contested airspace is likely shaping the service’s plans.

“We are over-invested in permissive ISR and we have to transform the force to fight and win in a contested environment,” Lt. Gen. Robert Otto, the USAF’s intelligence chief, told an audience in September at the Air Force Association conference in Washington, D.C.

The USAF’s current fleet of unmanned aircraft is largely unable to penetrate into an anti-access/area denial environment (A2/AD).

Out of that fleet, only the stealthy and highly secretive RQ-170 can penetrate into defended airspace.

“The Predator and Reapers are useless in a contested environment,” the head of the USAF’s Air Combat Command, Gen Mike Hostage had told reporters at the September conference.

USAF officials have previously indicated that they hope to leverage the UCLASS initial capabilities document for its follow-on to the MQ-9. However, it is unclear given the Pentagon’s budget situation as to how the USAF hopes to pay for such a program if need it still hopes to pursue such an effort.