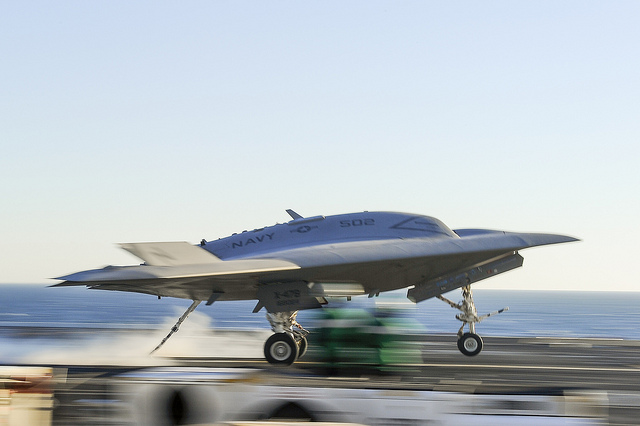 The U.S. Navy has a begun a second set of sea-trials for its Northrop Grumman X-47B Unmanned Combat Air System-Demonstrator (UCAS-D) aircraft onboard the carrier USS Theodore Roosevelt (CVN-71) about 60 nautical miles off the Virginia coast.

USNI News was onboard the carrier to observe testing on Sunday.

The day was off to an inauspicious start when aircraft — Salty Dog 502 — suffered from a communications malfunction during what was supposed to be its first test sortie of the day. The malfunction, the cause of which must still be determined, prevented the controllers from advancing the aircraft’s engine throttle settings past idle.

“What is important here is to understand that an X-aircraft is an experimental aircraft,” said Rear Adm. Mat Winter, Naval Air Systems Command (NAVAIR) program executive officer for unmanned aviation and strike weapons. Glitches are all but unavoidable with developmental systems.

However, after about two hours, the NAVAIR and Northrop testers decided to try again—this time successfully launching the X-47B from the Roosevelt’s port catapult at around 3 p.m.

As a Boeing F/A-18 Super Hornet chase aircraft roared overhead, the unmanned aircraft climbed to 1000ft above the sea, making a left-turn about four to five miles upwind of the ship to enter the carrier’s traffic pattern. Effectively flying in large oval pattern, the X-47B then came around for a “wave-off” overflying the ship. Later during the same sortie, it made a successful trap onboard the ship at 3:46.

The X-47B had a better day on Nov. 9, when it made two wave-offs, two traps and six “touch-and-go” landings onboard the carrier, Winter said.

In any case, NAVAIR has 11 days at sea during this period onboard the Roosevelt, Winter said. While Nov. 11 is a non-flying day, the rest of the week is open for further testing.

“The priority goal of this period is to obtain both navigation and air system performance data in more stressing conditions than were experienced in the last AIRDET on the George Bush last summer,” said Capt. Beau Duarte, Naval Air Systems Command’s program manager for Unmanned Carrier Aviation program during a press conference on Nov. 7.

One of the changes from the previous set of tests is that it will not just be the flight deck crew and landing signals officers who will be able to command the X-47B via digital messages, the carrier’s tower will also be able to use digital signals to wave-off the unmanned aircraft. Duarte said that the capability has always been resident in the X-4B’s software, but was not used previously. Other changes to the aircraft are various minor software tweaks, he added.

Wind speeds—between 28 and 36 knots — were higher than on the original July 10 tests where the X-47B made the two first-ever successful arrested landings onboard the USS George H.W. Bush (CVN-77). Additionally, the winds were varied along the ship’s axial line, Duarte said. Particular attention is being paid to how the X-47 deals with winds have interacted with the carrier’s island superstructure—known in naval parlance as a burble. “We’re very interested in the touchdown landing points of the vehicle compared to the planned touchdown points,” he said.

The (UCAS-D) unmanned carriers program is designed to explore the feasibility of operating an unmanned aircraft in the harsh carrier environment as a risk reduction effort for the Navy’s Unmanned Carrier Launched Airborne Surveillance and Strike (UCLASS) effort.

“Our focus through the next Fiscal Year 2014 is to continue to operate the X-47 focused on that technical risk reduction and maturation of technologies and exploration of CONOP [concept of operations]—understanding how our sailors are going to use this,” Winter said.

There is funding in the fiscal year 2014 budget to keep the carrier digitization and X-47B control hardware installed onboard the Roosevelt active for the duration of the fiscal year, Winter said. That would allow the Navy to take advantage of any further availabilities the Roosevelt might have later in the year. “That will all be driven by the availability of that aircraft carrier, which has a lot of other demands outside of the test domain,” Winter said. “So we have the resources to do this again if it’s available.”

Winter said that the Navy would probably undertake no more than two further carrier trials for the X-47B this fiscal year. Overall the Navy has allocated about $20 to 25 million to keep X-47 operations funded this year. NAVAIR is working with the service’s leadership to identify further “funding opportunities” for the remainder of the fiscal year—but nothing is definite just yet. The service will have to make a decision in the summer of 2014 as to whether the X-47B will continue to fly in fiscal year 2015.

Originally, the Navy had intended to retire the two X-47B demonstrators after the July 10 carrier landings, however after an outcry from many on Capitol Hill and within the defense community, the service has changed course. “There was an appreciation for the continued value in technical terms, in CONOPS maturity terms, to keep utilizing the X-47 on how we go forward,” Winter said. “What we have is an opportunity to tackle some of the technology concerns for our UCLASS program of record.”

Those technology concerns are not on the air vehicle itself, but rather the digitization of the carrier and the technical specifications of the control systems—the network, algorithms, hardware and software that actually operate the entire system. Winter said that the Navy also wants to learn more about how sailors will operate an unmanned vehicle at sea.

The Navy is also reconsidering its decision to not use the X-47B to test autonomous aerial refueling capability. “That is an objective,” Duarte said. “We are working within our funding possibilities that we are identifying for the remainder of this year and for the future to see if there is the resources to support achieving those objectives with the air vehicle.” The Navy had earlier decided to use a substitute business jet instead of using the X-47 for the air-to-air refueling tests—but the priority is future carrier detachment, Duarte said.